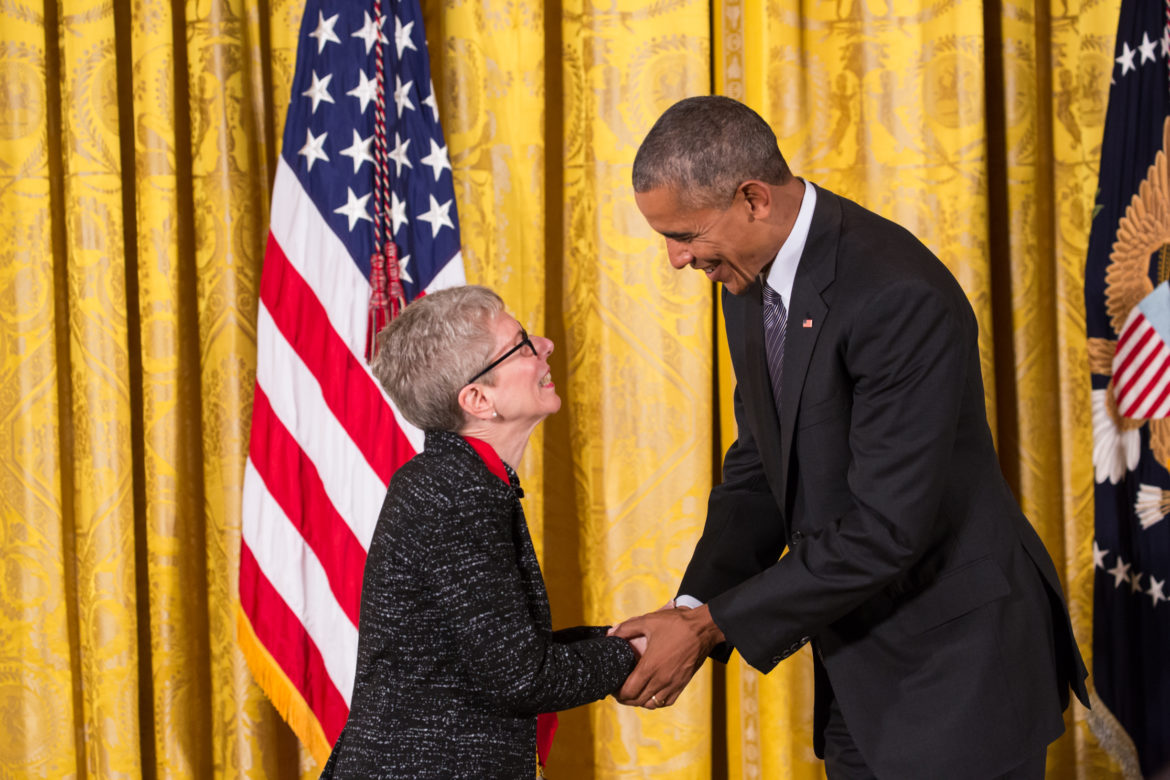 WASHINGTON, DC – On Thursday, September 22, in the East Room of the White House, President Barack Obama awarded the 2015 National Medal of Arts and the National Humanities Medal to distinguished recipients. First Lady Michelle Obama attended the ceremony. | ©2016 Photo by Cheriss May, www.cherissmay.com

WASHINGTON — As President Obama prepared to honor Terry Gross with a National Humanities Medal Thursday, he said he was honoring the Fresh Air host “and a whole bunch of people Terry Gross has interviewed.”

Gross had indeed interviewed many of her fellow 2015 National Humanities Medal and National Medal of Arts honorees attending the White House ceremony [video], including actor Mel Brooks, composer Philip Glass and journalist and author Isabel Wilkerson. It was the first time she had met many of them in person, she said, since she often interviews guests remotely from her studio at WHYY in Philadelphia.

Gross smiled from ear to ear when called to the stage, where she greeted Obama with a hug. A citation read aloud noted Gross’s “artful probing of the human experience. Her patient, persistent questioning in thousands of interviews over four decades has pushed public figures to reveal personal motivations behind extraordinary lives — revealing simple truths that affirm our common humanity.”

Obama put the medal around her neck. Gross, who is 4 feet and 11 inches tall, looked up at the President, smiled broadly and shook his hand.

“It was more thrilling than I ever imagined,” Gross told Current afterwards. “To get this kind of recognition. To get it from the NEH and President Obama was just — I never dreamed of anything like that.”

Obama said each honoree possessed a gift for enabling the public to exchange information and stories and to make sense of what’s important.

Gross is well known for getting her guests to open up but shared no special secret as to how she does it. “The guests who are on the show are people who I think are doing really important work, so I have a natural curiosity about them,” Gross said. “I always prepare as much as I can beforehand. … I always feel like the more you know, the more you can find out.”

Other public media National Humanities Award recipients have included Krista Tippett in 2014, who was honored for “thoughtfully delving into the mysteries of human existence,” Diane Rehm in 2014 for her “incisive, confident and curious voice,” and longtime Morning Edition contributor Frank Deford in 2013, for “transforming how we think about sports.”

Gross was one of 12 National Humanities Award recipients in 2015, who are just now being honored.