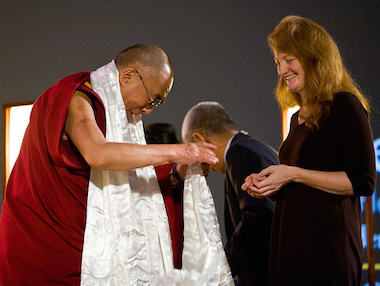 Tippett sees On Being as much more than just a public radio show about religion. The newly independent production explores “the mysteries of human existence” as an extended conversation. (Photo: Krista Tippett Public Productions)

When American Public Media launched Speaking of Faith in 2003, some network staffers thought that a public radio show focusing on religion, faith and human existence had little chance of finding an audience.

But 11 years later, host and creator Krista Tippett and her staff are preparing for the next stage of the show’s existence. Since parting ways with American Public Media a year ago, Tippett and her staff have taken charge of production and funding at On Being, as the show was renamed in 2010. It’s been a long journey for a show that some doubted could survive on public radio.

“Ten years ago, we didn’t have any models for how to do this and have a religious show that wasn’t proselytizing,” Tippett said. “There was an idea that it would be fluffy, clichéd or proselytizing. And I think we’ve shown week after week that you can do it in a way that belongs on public radio.”

On Being explores meaning, faith and ethics through conversations with a wide range of guests sharing secular and non-secular viewpoints. Over the years, Tippett has spoken with authors, religious leaders, musicians and scientists including the Dalai Lama, Yo-Yo Ma and Paulo Coelho.

The show received a Peabody Award in 2008 and has won three Webby awards for its website, and Tippett has written two books, one a New York Times bestseller. In July, she received an even higher honor — a National Humanities Medal from President Barack Obama for “thoughtfully delving into the mysteries of human existence,” according to the White House announcement.

“I’ve known of people who had gotten this medal, but I didn’t even know I could get it,” Tippett joked. Receiving the award validated her show’s evolution into what it is today, she said.

“I had to fight to get this going and fight to keep it going,” Tippett said. “I’ve been out there making it happen, and then one day you get a call saying, ‘We want to honor you for delving into the mysteries of human existence.’”

The medal also helped On Being’s staffers realize how far they’d come, said Trent Gilliss, executive editor and chief content officer. “It was a really proud moment for us and for the show,” Gilliss said. “It’s a real testament to what [Tippett] has done and how she’s done it.”

When the show launched as Speaking of Faith, Tippett and her team aimed to produce a weekly, broad-based show that would appeal to a public radio audience.

“She came in and said she wanted to do a religious show on a news channel,” Gilliss said. “Now, here we are almost 11 years later with a successful social enterprise.”

Before starting in radio, Tippett studied history at Brown University and later received a Fulbright Scholarship to study in what was then West Germany. She went on to freelance for outlets including the New York Times, Newsweek, the BBC and Germany’s Die Zeit.

Even though Tippett was convinced that her concept of a radio show about religion would work, she recognized early on that many would not share her certainty. “It’s always been kind of a square peg in a round hole,” Tippett said. “Talking about religion on public radio — there was a lot of skepticism, and probably still is.”

Jeff Bieri, p.d. of KRCC-FM in Colorado Springs, Colo., hears positive feedback from On Being listeners during membership drives. They probably like the show, he said, because it covers all types of spiritual endeavors.

“If it didn’t, we’d probably shy away from it,” he said. “But that diversity in the program is what keeps it on the air for us. It adds a spiritual angle we otherwise wouldn’t get.”

At first, people she talked to in the industry advised Tippett to construct the show by focusing on news hooks. But over the years, the show has bucked that advice.

“Generally, most of the time it’s a big conversation with one person,” Tippett said. “I accept that we have a culture that takes in information in bite-size pieces,” she added. “But that’s not what all of us need all of the time. There is room for content that is quieter, more reflective, and I think we’ve shown that’s possible.”

After building up the show with APM’s support over nearly a decade, Tippett and the On Being staff took a big leap last year. In July 2013, they parted ways with APM to produce the program through an independent company, Krista Tippett Public Productions. APM still distributes the show, which airs on 337 stations, mostly on Sundays. The show is now produced in a 4,000–square-foot studio and live event space in Minneapolis.

“After making the move, we’ve kind of found our feet,” Tippett said. “In the last 10 years the world has changed, and so has our industry. We’re smaller and more nimble now than we have been.”

On Being split from APM to become more “nimble” and try new projects and ventures, Tippett said. Over the past year, she and her staff have considered new ways to earn revenue and engage their audience.

With foundation support putting the production on stable financial footing, “now, we can add and grow,” Tippett said. “I don’t want to be risk-averse. We want to be entrepreneurial.”

On Being will soon launch a revamped website and has looked at ways to use the live event space inside its new headquarters. After it launching a free smartphone app earlier this year, developers are working on a tablet version. Its archive, accessible via the website and the app, include episodes dating back to the early days of the show.

The show has been financed primarily through grants from foundations including the Henry Luce Foundation and the Kalliopeia Foundation. Earlier this year, it received a $600,000 grant from the Ford Foundation. The show usually receives support from four to six foundations at a time, Tippett said, preventing it from relying too heavily on any one funder.

With the grant support, On Being has been fortunate enough not to ask its audience for money, Gilliss said.

“We haven’t had to put the donation button on the website yet,” Gilliss said. “That’s intentional.” Producers respects their audience and want to avoid using the show’s  email newsletter or other connections with listeners as a way to raise money, he said.

Tippett hopes to avoid raising money through On Being’s website. “I hate the word ‘donate,’” Tippett said. “We’ve been successful because there’s a sense of community behind the show and they care about it. They’re already making a big contribution by listening to the show, and right now we don’t need anyone’s $20.”

But the On Being team is looking to diversify its revenues beyond philanthropic grants, including efforts to involve its audience that don’t involve pledge-style direct solicitations. On Being has considered introducing underwriting sponsorships and recently started working with Midroll Media to handle underwriting for its podcasts.

Going independent and financially stable freed the production team to create elements that go beyond its broadcasts, Tippett said. Those include the Civil Conversation Project, a mix of online resources, live events and appearances by Tippett aimed at fostering civil discourse. The project’s resources have been used by organizations including Harvard’s law school and in a variety of settings in four countries, including Jordan and Northern Ireland.

“We’ve gone from being a radio show embedded in a media organization to a social endeavor with a radio show at its heart,” Tippett said. “There is something about this content that has impacted people’s lives.”

On Being has also launched “Your Audio Selfies,” in which listeners sit for professionally recorded interviews in On Being’s studio; the audio is edited into 3-minute show segments that are posted to the website with photos. The segments grew out of live events, and the show is planning to take the series on the road, Tippett said.

Producers have also sought to engage listeners online by posting unedited versions of Tippett’s interviews. By doing so, the production process becomes more transparent to listeners and the show builds trust with the audience, Gilliss said. The longer takes have proven to be popular.

When measuring the show’s reach, Tippett pays little attention to standard tools such as Nielsen ratings. Interacting with their audience and hearing feedback from stations has given producers a better picture of how the show is performing, she said. Nielsen ratings don’t “match the engagement we hear from the audience and the program directors,” she said.

Graham Griffith, a radio consultant who has worked with Tippett and Gilliss, said On Being has not only found an audience but has transitioned to operating as an independent, sustainable business. A successful transition to independence is especially tricky to pull off, he said.

“You have a successful radio host who morphed into a successful CEO,” Griffith said. “What Krista and Trent have done is tap into something people feel like they need — that’s a given. What’s not a given is that they’ve been able to build a robust business around the show.”

One thought on “Naysayers be damned, public radio’s On Being thrives as ‘social enterprise’”