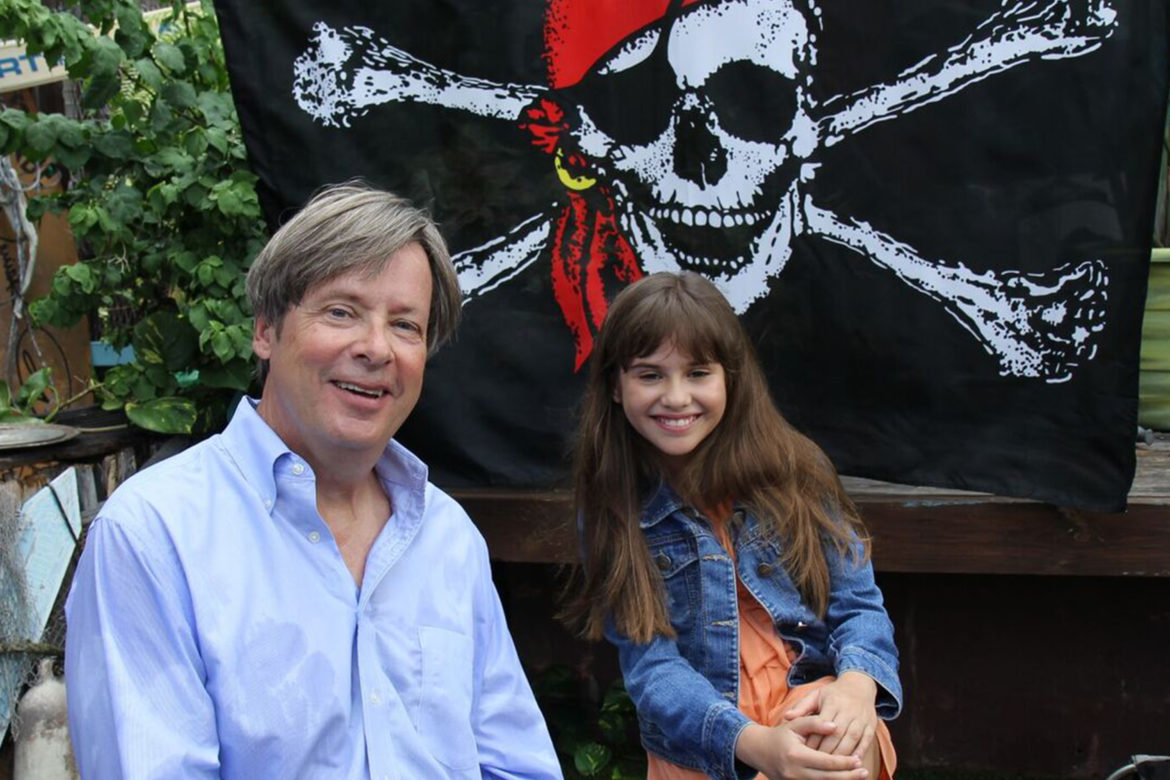 The series recalls shows like Monty Python’s Flying Circus and Saturday Night Live, looking to keep kids laughing through its four-episode exploration of books and culture for the middle-school set.

American Public Television releases the half-hour episodes into national distribution May 1. So far 153 stations have committed to airing Kid Stew, and 68 are “maybes,” said Hilary Finkel Buxton, director of the APT Exchange.

Patterson’s tween-targeted franchises include Jacky Ha-Ha, about a 12-year-old girl who loves to make people laugh; and I Funny, where a middle-schooler seeks fame as a standup comic. Both book series depict kids who confront difficult home lives with humor. He also co-authors the Middle School book series that includes such titles as The Worst Years of My Life and Get Me out of Here! 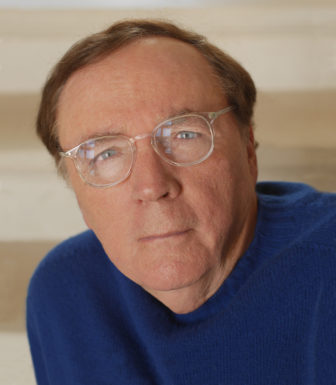 Patterson, a literacy advocate and philanthropist, lives in Palm Beach, Fla., and has strong ties with South Florida PBS, the regional public television organization created by the recent merger of WBPT in Miami and WXEL in Boynton Beach. Patterson worked with WXEL on his 2016 documentary Murder of a Small Town, which examined blight in his hometown of Newburgh, N.Y., and two rural communities in Florida.

He brought his idea for Kid Stew to South Florida PBS a year and a half ago, said Joyce Belloise, VP of content & community partnerships. “He wanted to create a show for a preteen audience because he loves that audience, and he loves to talk about reading. We were thrilled.” Belloise took the show directly to APT, largely due to time considerations. “Jim wanted something that he could get on the air pretty quickly,” she said.

Each episode is peppered with sketches and musical numbers about books, and features an interview with Florida-based authors, including humorist Dave Barry, co-author of the Peter and the Starcatchers book series; Carl Hiaasen, a Miami Herald columnist whose bestselling kids’ books include Hoot, Flush, Scat and Skink–No Surrender; and Brad Meltzer, whose picture-book biographical series Ordinary People Change the World highlights key figures in history. Edwidge Danticat, an award-winning Haitian-American author who has written six books for children and young adults, discusses Haiti’s cultural traditions in a segment that’s a virtual tour of the country.

Beyond Kid Stew’s merits as a public TV show that encourages reading, Belloise hopes that Patterson’s massive social media clout — including his 3.3 million Facebook followers and his large footprint on Instagram and Twitter — will help attract a preteen audience that is a hard draw for public television.

“That age group just doesn’t watch PBS. They are gone … We have never been successful in capturing and keeping it,” said Kathryn Larsen, senior director of TV and radio programming at WNED in Buffalo, N.Y.

“That’s James Patterson’s audience, … a little bit older,” said APT’s Buxton. “It is underserved by public television content. For APT, that is part of the appeal in many ways, because our content really complements what comes out of PBS.”

“We’ll see how it goes,” said Kate Pearson, managing director of programming for Maryland Public Television, another fan of Kid Stew. “Probably little sisters and brothers will watch too. There’s nothing funnier to little kids than other kids running around pretending to be adults.”

“There is a lot of wacky sketch stuff,” Pearson said. “It’s a fresh addition to PBS Kids’ lineup … going back to the peer-presented Zoom!-style educational children’s television.” 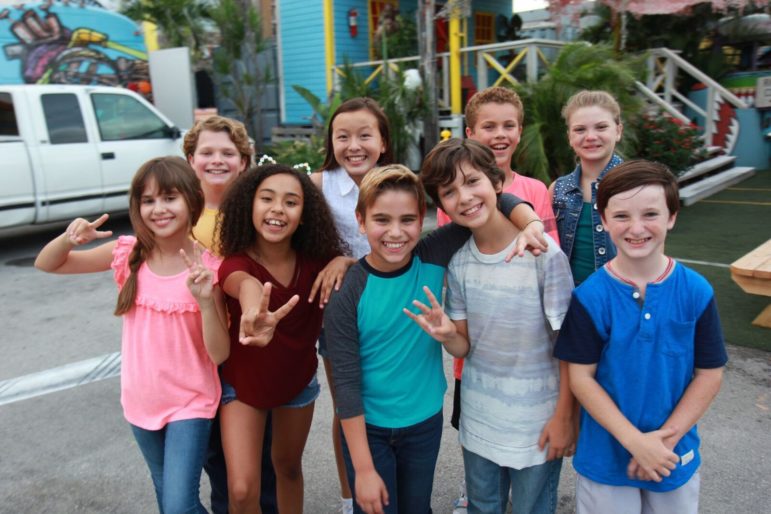 The nine cast members of Kid Stew — often sporting funny wigs and crazy facial hair — dress variously like French waiters, sleazy record promoters, stuffy British TV hosts and famous historical characters. In a recurring sketch, kid actors Madison Maxwell and Blake McCall use a phone booth to travel back in time, hinting to William Shakespeare that his observation “To pee, or not to pee. That is the question” could be going somewhere. In another skit, they tactfully convince Leonardo da Vinci to rethink a huge pair of buckteeth he’d painted on the Mona Lisa. He does — leaving her with a mysterious smile.

In “Kid Stew Ewws!,” a riff on SNL’s “Weekend Update” skits,  kid producers and camera operators react with disgust as kid anchor Nicholas Hernandez reads gross-out news items, like cockroaches flying out of a hairdryer and a chemical compound in vanilla flavoring that comes from beaver butts.

In an interview at the APT Fall Marketplace conference last November, Patterson said he finds preteens surprisingly open to reading and learning, as long they’re being amused. “I don’t think it’s hard to write for them, but you do have to entertain them,” he said.

The show is intentionally fast-paced, he said, so “you can watch it for a minute and then go back to it.”

Patterson conceived of Kid Stew and brought in showrunner Frank Costantini, a TV writer and director who has collaborated with him on other productions. Costantini, a partner in a Jacksonville-based creative agency, put together the team of writers. Patterson was heavily involved in each stage — from scripting to final approval of each episode. He a co-producer and shares the copyright for the series with South Florida PBS.

Patterson writes for both children and adults, and his media empire extends far beyond books. Instinct, a CBS police procedural drama series based on his book Murder Games, debuts March 18; his Murder Is Forever, an episodic true-crime drama, premiered in January on Investigation Discovery. A thriller Patterson penned with Bill Clinton, The President Is Missing, comes out in June.

South Florida PBS is working with Patterson’s publisher, Hachette’s Little, Brown and Company, on a social media campaign, Belloise said. The station will launch its own campaign in early April, sharing snippets of the show and photos. It’s also planning an April 14 premiere party with Patterson and the Kid Stew cast at WXEL’s studios.

Kid Stew debuts locally April 15, when WPBT runs all four episodes back-to-back from 8–10 a.m.; WXEL unspools the series for its viewers from 10 a.m. to noon. Belloise is adding Kid Stew to WPBT’s regular schedule on Friday afternoons at 4 p.m.; WXEL will air it Sundays at 9 a.m.

MPT’s Pearson views Kid Stew as an opportunity to experiment with drawing in older kids. She will likely schedule it in a weekend-morning slot, she said.

Kid Stew is funded by the Eunice Joyce Gardiner Charitable Foundation, a private, Florida-based foundation that provided general support to WXEL and Miami’s WLRN in 2016, according to tax records. Since APT policy bars funders from being involved in the creation and production of the shows it distributes, Patterson focused on creative roles.

Belloise hopes Kid Stew will go into production for a second season this summer. Patterson’s team is “talking to kids to see if they are available.” She anticipates another four episodes, unless additional funding comes through.

Launching Kids Stew with only four episodes might be the show’s biggest problem.

“The only thing I was disappointed about is, there were not more of them,” said WNED’s Larsen.