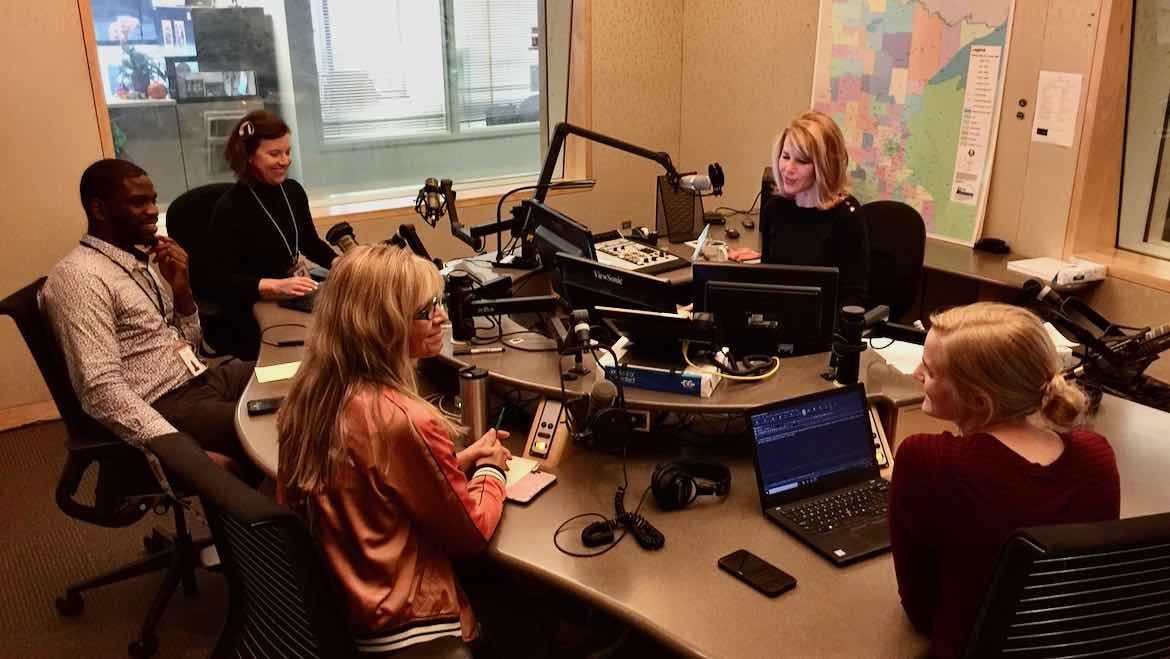 Kerri Miller, at mic, leads a planning meeting with the "Flyover" team.

Flyover from Minnesota Public Radio News, a live call-in program created by host Kerri Miller and her producers, is returning to explore issues of identity in politics during the 2020 election.

The new season, which will begin airing weekly in January, will focus on the Midwestern counties that swung from blue to red in 2016.

“We’re entering this year with a focus on the flipped counties and what they tell us,” Miller said. Half of the 100 counties that made the biggest political shifts during the last presidential election are in the Midwest and concentrated in Iowa, Michigan, Minnesota, Ohio and Wisconsin.

“We’re in the middle of this transformation going on in American political culture,” Miller said. “We have to respond, and Flyover is poised to do this.”

Flyover is about identity in America — how listeners’ life experiences and values shape their views. The show features guests who aren’t often heard in the coastal hubs, and callers from parts of the country outside the media spotlight.

The inaugural show, which debuted in September 2017, was about “The Real America.” “You can expect cogent and insightful analysis from our guests,” Miller said, in opening that broadcast, “but the most important voices in this show will be yours.” One guest was a professor and author who wrote about rural parts of the country, and another was a writer and advocate for low-income children and families.

In her callout, Miller asked listeners, “What do you hear in the subtext of those words ‘real America’? How does it fit with how you see yourself and your community? What do you think it says about you?”

One of their first callers was a Mexican-American man in St. Paul, who described the dissonance he felt when he heard that phrase.

“I’m living the American experience, paying my taxes, taking care of work, doing the everyday, at the same time I’m being excluded,” he said. Thinking about it gave him the chills, he added, and he began to cry. “What it really means is white Americans, and it doesn’t include me, so it hurts.” In that first episode, listeners also heard from callers in Idaho, North Carolina and Pennsylvania.

As the series continued through fall 2017 and occasional reappearances, Miller and her team have heard from a wide range of people — in terms of education, geography, age and political diversity, said Marcheta Fornoff, producer.

“A big part of that is inviting people — and creating a space where people understand that they can share their views and be respected,” Fornoff said. The Flyover team aims to achieve that by being very deliberate in the ways they craft questions for callers. Instead of asking listeners to share their opinions, she said, they ask how an issue affects their lives. “They get to share their views and explain why.”

“Having this ethos of seeking understanding is appealing to our listeners, and makes them more willing to share their own experiences,” Fornoff said. “For a lot of people, politics is very personal; we’re asking them to share their lived experience, and sometimes they’re revealing things you might not tell a stranger.”

“For people to share that on the air is really valuable — I think it really shows that we’re touching a nerve,” Fornoff said.

‘Lightning in a bottle’

The MPR team began developing this approach in January 2017 when Miller became one of four rotating hosts for Indivisible — a series created and distributed by WNYC in New York City during the first 100 days of Donald Trump’s presidency. With live weeknight broadcasts, the show attempted to bridge partisan and ideological divides by providing a forum for listeners to hear different reactions to political issues of the day.

Miller was the only host who anchored her show from outside New York City. Thirty minutes into her first Indivisible show, she knew that her focus on identity was resonating with listeners, she said.

“People were eager to frame their political thinking in a larger sense and bring their own experience,” Miller said. A man from Gary, Ind., called in from the factory floor and connected the dots, she said: “‘This is where I work, this is who I am, this is the town I live in, and this is why I believe what I believe.’ He put it all together.”

The factory worker’s remarks were “lightning in the bottle,” Miller said. “That’s where we think the true listening and generous comprehension comes in.”

After Indivisible ended its 14-week run, Miller and Jeff Jones, MPR’s assistant PD, decided to keep the conversation going in the form of Flyover. The show would be produced for limited seasons and respond to the pressing issues of the moment. American Public Media, MPR’s distribution arm, offered the show for broadcast by its affiliates.

Since its first season, which ran from September to November 2017, Flyover has tackled many hot-button political issues — including immigration, jobs, healthcare and economic inequality, Jones said. Discussions in each program are rooted in the ways these issues are lived out in people’s lives.

Flyover also provides an alternative model for election coverage, which is often focused on national politics and horse races between candidates, Jones said. With that approach, people in local communities are reduced to demographic profiles and the likelihood that they’ll vote. “It lumps people together in a way that can be crunched and analyzed as data,” Jones said. “That’s valuable for all sorts of things, but does not help the average person make sense of what’s happening.”

“We have to hear each other and hear stories,” he said. “We are letting the audience hear from someone who they are less likely to hear from on their own social media feeds and community bubbles.”

‘You can call in too’

Public radio has generally moved away from live call-in formats, particularly for more serious topics, Jones said. But the advantage of the format is that it provides an opportunity to encourage genuine listening and real conversations, he said.

“What we can do by opening the phones is allow you to hear someone else’s story in the moment in real time,” Jones said. “If you’ve got a connection to that story, you can call in too. A conversation that you aren’t otherwise going to have has suddenly unfolded.”

Wisconsin Public Radio is one of the stations that broadcast earlier seasons of Flyover. Mike Arnold, director of content, said the show’s goals for fostering nuanced discussions with diverse viewpoints are hard to come by in a time of polarization.

“It puts a lot of weight on a program producer to draw people in,” Arnold said. “If anybody can do it, it should be public radio, but it’s challenging. It’s easy to fall back on assumptions about people with certain viewpoints, and it’s never been easier for people to find media that aligns with their views.”

“Flyover is one example, but I think, in general, the more we can use public radio to help people understand the complexity and diversity of the country, the better off we’ll be,” Arnold said. He praised the WPR newsroom for producing more “bottom-up” journalism, trying to understand the issues that affect people’s lives.

“Whoever we talk about, we should assume they are part of the audience and not a population we’re trying to understand,” Arnold said. “The more we do that, the better our election coverage will be, and the more people will be willing to share their views.”

The next season of Flyover will run through election 2020, as a regular part of Miller’s weekday-morning talk show.

“We’ll have the same focus on issues of American identity,” said Jones. “Trump has tapped into identity issues all over the country — and in this part of the country in particular. It’s worth talking about — why are people responding to these issues?”

Producers will continue to draw on expert guests and callers who will talk about their personal experiences, but they’re also planning to introduce reporting and commentary from people on the ground in the five Midwestern states where voters flipped red for Trump. These contributors will talk about what they’re seeing as the 2020 election approaches. A show on immigration, for example, may draw on in-depth reporting from reporters around the region — stringing together interviews with reporters from Kansas City to Detroit.

“I hope that it can help uplift voices from places that we don’t necessarily hear from on a regular basis in the national media,” Fornoff said. “If more of that had been accessible on a larger scale, the results of the 2016 election wouldn’t have been as surprising.”