Halfway through its 14-week run, Indivisible, a public radio talk show about America in a time of change, has attracted callers from across the political spectrum to a series of thoughtful conversations.

Its goals — to heal a divided country by exploring monumental cultural shifts the media missed in the 2016 election — are hard to measure. But Indivisible has succeeded in offering a mainstream media voice to conservatives and supporters of the 45th president alongside liberal voices often heard on public radio. It has also kept the discourse civil. 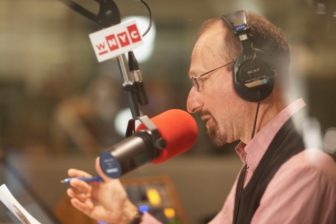 “We are not setting the show up as a debate [but] the opposite of a debate,” said WNYC’s Brian Lehrer, one of four co-hosts who trade off anchoring the live broadcast one night each week. “The premise is to get people out of their bubbles.”

Executives at WNYC, the New York City station that conceived Indivisible and teamed up with Minnesota Public Radio and The Economist to co-produce it, say public radio’s reach into local communities and its storied expertise in talk programming may make it the best positioned among national media organizations to provide insight and encourage tolerance. Doubling down on a commitment to ideological diversity, they hired prominent conservative talk radio host Charlie Sykes to anchor Indivisible’s Wednesday-night broadcasts — making him a rare conservative voice on public radio, albeit one who opposes the current administration.

“After the election it became very clear that the country is very divided, and the trust in media has been shaken,” said WNYC President Laura Walker. “If you look at what’s happening on cable news, it’s pundits talking to each other.” The Washington Post, New York Times and Wall Street Journal are producing deep-dive coverage, and NPR is doing great reporting, she said, but local public radio stations provide an opening to do something unique to bring listeners of all persuasions together.

“As we looked at what we could do to become a larger convening force, to talk across differences, we came up with a national talk show,” she said.

Indivisible was partly developed as a follow-up to The United States of Anxiety, a WNYC podcast hosted by Kai Wright during last year’s election cycle, said Jim Schachter, VP of news. Produced by WNYC Studios and The Nation, the show addressed the polarizing economic, social and political divides of the general election campaign.

“There are so few venues where you can cross over,” said Sykes. “I am very clearly a stranger in a strange land, but I am adapting to public media, and I think everyone is adapting to me.”

Indivisible, which is running for the first 100 days of the Trump presidency, wants to break down stereotypes and misperceptions by soliciting personal stories, not rants, from listeners across the country. Like those of Farrah in Raleigh, N.C., a registered independent and Trump supporter who called into a Jan. 26 broadcast hosted by MPR’s Kerri Miller, “How Donald Trump Challenges What We Assume About One Another.” Farrah spends holidays with her gay best friend and his Mexican husband, and the close relationship doesn’t fit with the pervasive negative caricature of intolerant Trump fans. “People assume you are racist or homophobic or a bigot if you voted for Trump,” she said.

WNYC and MPR weren’t able to provide ratings for the hourlong show, which airs live on 164 stations at 8 p.m. Eastern time, Mondays through Thursdays.

But Schachter described impressive immediate responses to the show. WNYC’s call-in boards routinely fill up just seconds after hosts open the phone lines, and activity on social media platforms has been robust.

Indivisible has reached 5.2 million people on Facebook by live-streaming the audio from the program, according to WNYC. And #IndivisibleRadio, the show’s official hashtag, has been used 8,000 times since its premiere.

So far into its limited run, “people who are reacting on social media are extremely engaged,” Schachter said. “They don’t love everything they hear, but you can see an avalanche of tweets …, ‘This is the best conversation I found’ or ‘the only conversation I found.’”

“Every bit of feedback” from public radio stations has been positive as well, he said.

During a recent broadcast hosted by Lehrer that explored nationalism under Trump, three call screeners deftly juggled 10 lines at WNYC’s studio in Lower Manhattan. Lehrer invited Trump voters to call first, then Hillary voters, then anyone.

The screeners logged callers’ names, locations and points of view on a grid visible on the desktops of everyone on the show crew. The control room buzzed with their conversations: “Do you mind turning off your radio in the background?” … “I’m so sorry, we are looking for Trump voters right now” … “Indivisible. Are you a Trump voter? What do you think of the transition from left to right, to nationalism versus globalism?” … “Richard, are you driving? We have a policy of not distracting drivers. Could you pull over and call us back?”

The screeners were flawlessly polite. A call to Indivisible may be a Trump supporter’s first contact with public radio, Ryan said, so the team wants it to be a positive one.

Each co-host examines a different aspect of Trump’s presidency on their weekly show. Wright’s broadcasts, co-hosted Monday nights with John Prideaux and Anne McElvoy of The Economist, look at international perspectives on changes coming from Washington, including why Russia matters to the Trump administration and what it means to be an undocumented immigrant under Trump. 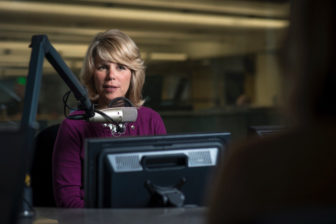 Tuesdays, Lehrer explores how quickly American norms are changing under Trump’s presidency — from the travel ban on visitors from Muslim-majority countries, to expectations for health-care coverage, to the conundrum of whether to take what the president says seriously.

Sykes, who flies from Wisconsin to New York weekly to anchor his Wednesday broadcasts from WNYC, weighs developments in the new administration against American values and conservative principles, hitting topics such as press freedom and the limits of presidential power.

Miller helms her Thursday-night show from MPR in St. Paul, tackling identity issues like conflicting views of “elites” and whether the nation can be united.

Indivisible is carried mostly by Eastern and Midwestern stations, since its live time slot bumps up against All Things Considered broadcasts in Western time zones. KQED in San Francisco airs it delayed at 11 p.m. Many station websites provide a live stream of the broadcast.

Hosts say the hardest part of the show is melding the flow of daily and late-breaking news with Indivisible’s overarching themes.

“The hardest thing is how [involved] in the actual news cycle I want to be, because I feel like we have a bigger mission,” said Miller.

Sykes hurls more barbs at Trump than the other co-hosts combined. He opened a recent show by mocking Ted Cruz’s family dinner at the White House and the president’s reliance on Breitbart News for intelligence. His Feb. 22 broadcast, “Living Under An Authoritarian Regime,” featured an interview with Garry Kasparov, legendary Russian chess master and chair of the Human Rights Foundation.

Sykes ended his 23-year talk radio show on WTMJ in Milwaukee last year. His longstanding decision to step back was made easier after Sykes denounced Trump during the presidential campaign and was vilified and abandoned by a swath of his audience. His next book, How the Right Lost Its Mind, comes out in October. Other conservative hosts who oppose Trump’s agenda have been silenced by abusive trolling and sinking ratings, Sykes said in an interview.

Indivisible’s 100-day run is slated to end April 27, but WNYC executives stopped short of declaring that date the last broadcast. They plan to roll out a new weekly podcast building on Indivisible and The United States of Anxiety, Schachter said, which will look at other moments in U.S. history when the nation was divided. WNYC is tentatively planning to air the show locally one night a week, with Wright and correspondents taking calls.

And WNYC is exploring whether Indivisible’s limited run could be extended, according to Dean Cappello, chief content officer. His team is consulting with partners on Indivisible and will decide by the end of March “if this particular show and format will exist after the 100 days.”

“We know that stations need to make decisions,” Cappello said. “It is almost certain that the DNA of Indivisible — getting people together to discuss pressing issues, respond to the state of democracy and build bridges — will survive in multiple forms from WNYC and WNYC Studios.”