A new national weekly talk show from Minnesota Public Radio starting this fall will explore issues of national identity first broached by Indivisible, a program that aired weekday evenings for the first 100 days of the Trump presidency.

MPR’s Kerri Miller, host of the upcoming Flyover, was one of four rotating hosts of Indivisible, a co-production of MPR and WNYC in New York City. That show aimed to pop political and cultural bubbles, asking people from across the country and all walks of life to opine on-air about issues such as politics, gender, work, health care and immigration. 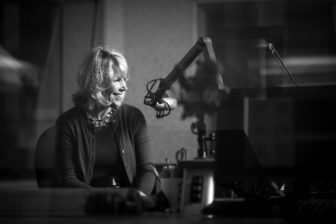 “It was so rich, and there was so much to say,” Miller told Current. “We ended [Indivisible] feeling like the audience wasn’t ready for the conversation to end. And we had so many ideas.” Conversations at MPR about a follow-up show “started pretty quickly after Indivisible ended,” Miller said.

Each hourlong Flyover episode will address a specific topic, like how Americans view poverty, Miller said. For the first 20 minutes, she’ll discuss the issue with a pubic radio journalist on the ground in a specific city — in this case, it may be in struggling Detroit. Then she’ll interview experts on the subject and open the phones to callers.

The episode she referred to, titled “Up by the Bootstraps,” “is really [about] the culture of the way we see people who have less,” Miller said. “That’s what we’re trying to get at. I am going into the show [with] the idea that we blame people that they haven’t succeeded financially. I don’t know where and how that happened, but people feel it viscerally.”

The first episode, to air Sept. 10, will examine the concept of “the real America” frequently cited by political pundits. Another show explores why the idea of being an American is so closely aligned with the mythology around guns.

Flyover is scheduled for a 12-week run Sundays at 4 p.m. Eastern time through November 27. But Miller said the show could return in the spring “if it goes as well as I think it’s going to.” Miller will attend the Public Radio Program Directors Conference in Washington, D.C., Monday and Tuesday to talk about the show and meet station reps.

Indivisible, which aired at 8 p.m. Eastern time Mondays through Thursdays, was a tough sell on the West Coast since it bumped into All Things Considered’s drive time. MPR scheduled Flyover for Sundays in response to station requests, Miller said.

MPR “was hearing that Sundays have become [dominated by] entertainment-based, podcast-able content, and stations were asking for some kind of live, dynamic show,” Miller said. “And as we looked, it seems natural to experiment with where stations said they wanted something live.”