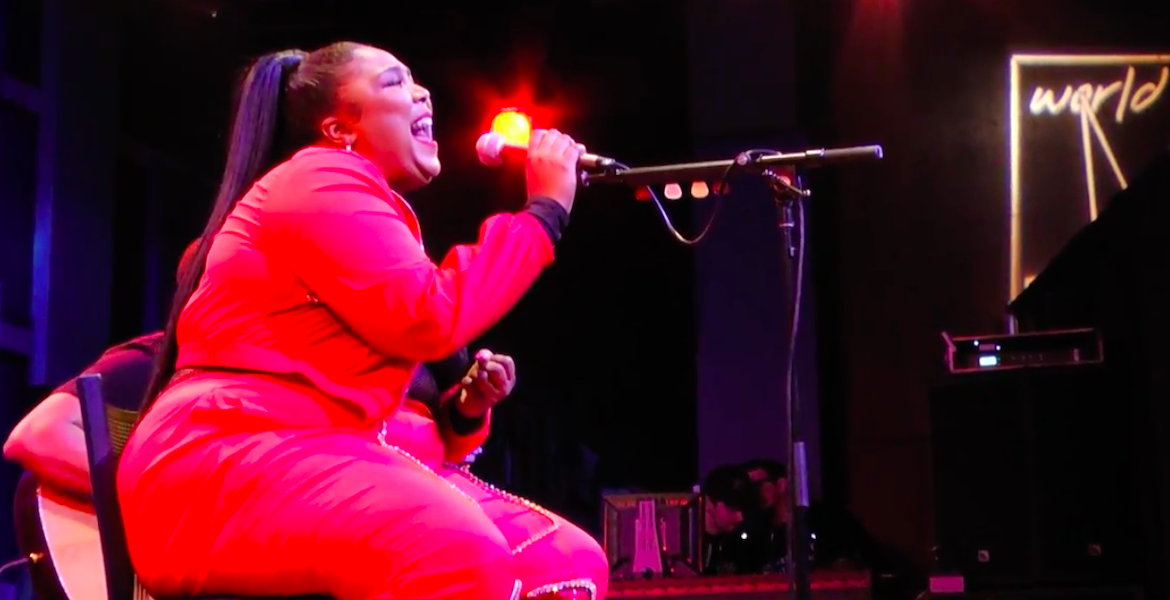 Lizzo performs during the 2019 Non-Commvention.

VuHaus, which has been up and running as a digital video platform for four years, has turned into NPR Music’s “Live Sessions” page and will be accessible from the NPR.org homepage. The move is part of a new partnership announced Thursday between VuHaus and NPR Music.

Erik Langner, who led development of VuHaus in his earlier role as managing director of Public Media Company, co-founded the service in 2014 with longtime public media consultant Mike Henry and five Triple A stations. He characterized the move as the next step in an existing partnership between the two public media companies. Two years ago, NPR Music and VuHaus launched the Slingshot series to promote emerging local artists.

The new arrangement “allows our station content to gain prominence with a wider audience,” Langner said.

NPR Music, meanwhile, will strengthen its connections to local music scenes by showcasing videos produced by Triple A stations, Henry said. VuHaus will provide the content to NPR at no cost.

“Stations across the country have unique takes on regional, local and national music scenes, and they regularly welcome artists into the studio for one-of-a-kind performances,” said Lauren Onkey, senior director of NPR Music. “We’re excited to share the rich collection of videos produced by stations to a broader audience of music lovers.”

VuHaus will no longer maintain a standalone website; VuHaus.com, its original URL, redirects visitors to the NPR “Live Sessions” page.

But the expanding partnership with NPR Music isn’t technically a merger, according to Henry. VuHaus PD Mark Abuzzahab continues to curate station-produced music videos on the “Live Sessions” main page, rather than rely on an algorithm. All six of the VuHaus staffers who work on daily operations, only one of whom is full-time, will retain their jobs, he said.

“NPR Music will not own us,” he said. “There’s no financial exchange.”

Likewise, each participating station will still be in charge of curating its own “city” page, as they have done on the VuHaus website. VuHaus has revised its fee structure for the new partnership, but Henry declined to share details.

VuHaus launched in 2015 in an attempt to carve out a bigger footprint for Triple A public radio stations on digital platforms. Gaining visibility and building an audience of digital listeners can be challenging for Triple A stations because few of them own intellectual property in the music they air on the radio, Henry said.

Producing original video content, usually musical performances shot in a station’s studio or at a station-sponsored festival, was a promising strategy to address this. But it required up-front investments. WXPN in Philadelphia, a founding partner in VuHaus, had spent $100,000 on video equipment by the time VuHaus went live in 2015.

In creating the VuHaus platform, Triple A stations banded together with Public Media Company to create a digital brand for music discovery. By aggregating and sharing their locally produced videos, they had a better shot at building audience and attracting sponsorships. CPB backed the idea, investing $1.1 million in grants since its start.

Today, 20 Triple A stations from across the country use the service, which includes an embeddable video player and allows stations to upload their music videos and curate a “city page” on the site. Now this content lives on the NPR “Live Sessions” page. Participating stations are part of its sponsorship network and they’re included in collaborative editorial projects like Slingshot.

Matt Reilly, program director at KUTX in Austin, Texas, one of VuHaus’ founding stations, said VuHaus has attracted both sponsorships and donations. KUTX gains exposure when bigger Triple A stations like KEXP in Seattle feature its videos on its website.

“If they have our [call] letters by their playlist, that’s good for us,” Reilly said.

But Reilly also acknowledged that web traffic for his station’s VuHaus videos is “not great.” Web hits for KUTX’s VuHaus videos typically add up to the single thousands each month.

By January 2016, 20 months after VuHaus’ launch, the platform had attracted a total of 435,000 pageviews. Henry would not give updated metrics for VuHaus’ average or overall pageviews — “I don’t even know, I couldn’t tell you that,” he said. But viewership was much lower than traffic to NPR’s website, he said.

The website’s uphill struggle to build viewership was one of the reasons VuHaus worked for more than two years on the deal to integrate its content with NPR Music happen, Henry said.

Slingshot, the first collaboration between NPR Music and VuHaus, will continue under the new partnership. Content produced for it will be published on a separate webpage from “Live Sessions.”

Slingshot, designed to promote emerging artists in local markets, has two features. “Station Breaks” is a monthly series on NPR’s website that showcases new songs from local artists selected by participating VuHaus stations. The other, “Slingshot Scenes,” involves editorial collaboration between NPR and a VuHaus station to provide a deeper look at musical artists in the station’s market.

Amy Miller, PD for KXT in Dallas, credits Slingshot with helping her station showcase UK singer Jade Bird. KXT nominated Bird as a Slingshot artist in spring 2018 after Miller and others felt a duty to put Bird in front of a national audience.

“She was an artist we kind of grasped onto right away. To watch her career take off has been pretty cool,” Miller said.

Miller said she expects VuHaus to reach a bigger audience through the new NPR Music partnership.

“Stuff like this really kind of puts a spotlight on North Texas and the artists we believe in,” she said.

This article has been revised to clarify Erik Langner’s role in developing and co-founding VuHaus at Public Media Company.