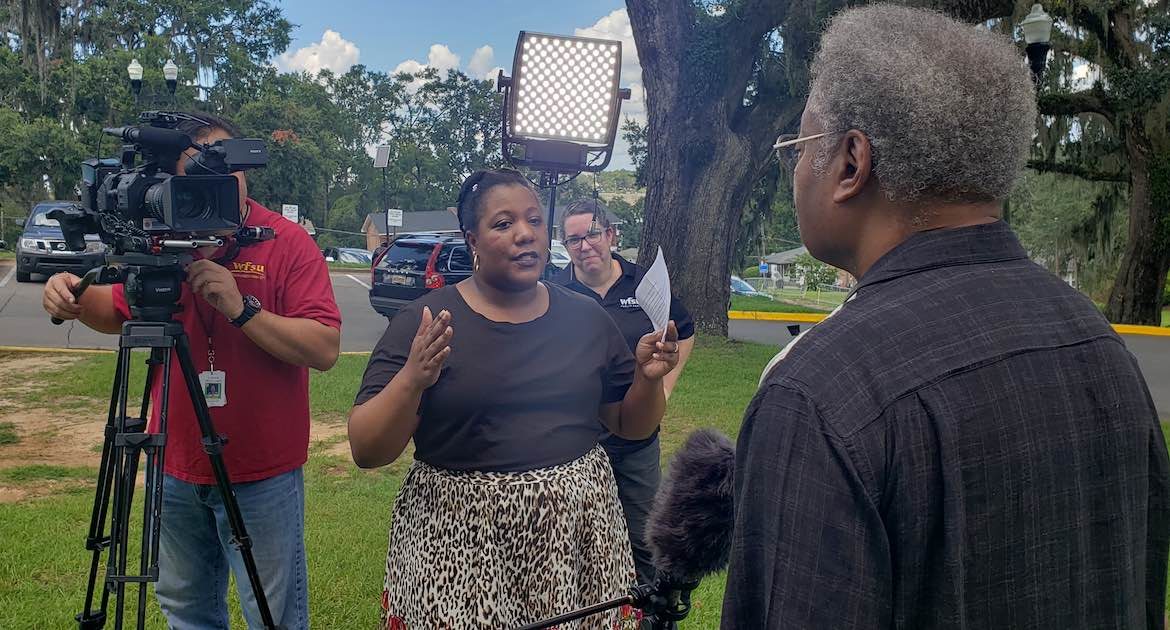 A new PBS public affairs series that looks at the past to explain current events is experimenting with a new formula to create connections with local audiences.

Retro Report on PBS, an hourlong magazine premiering Oct. 7 at 9 p.m., is the first series commissioned by Chief Programming Executive Perry Simon. It examines a wide range of topics in the news — including the magnetic appeal of social media and the threats posed by nonnative species — using historical context and vintage video. The series will air Mondays and Tuesdays through October.

With grants from PBS, 11 stations are producing “Retro Local” segments built on Retro Report’s editorial framework — reexamining events from the past shaping today’s news. Many of these reports will air separately, not as local inserts within the PBS show. Producers at four stations that received the grants told Current that the funds and editorial guidance have helped them build in-house collaborations that strengthen their news coverage.

“We’re a small shop, and we only had one full-time production person,” said James Faulk, producer at KEET in Eureka, Calif. “Producing two stories has been a battle, but we love the opportunity, and we’re making it work.”

For the national broadcast, co-hosts Celeste Headlee and Masud Olufani guide viewers through four segments in each episode. Humorist Andy Borowitz will close out each program with a segment titled “Now It All Makes Sense.”

The format is an experiment for Retro Report, a nonprofit news organization that specializes in producing news content that provides historical context to stories in the headlines. Philanthropist and former TV editor Christopher Buck established Retro Report in 2012 and provided a 10-year grant to support its launch.

“He felt there wasn’t enough good follow-up reporting,” said Kyra Darnton, who spent 15 years as a producer at 60 Minutes before joining the nonprofit organization as EP. “He wondered, ‘What if there was a place where you could come and see what happened to all these stories?’”

The importance of Retro Report grows each year, Darnton said. “We’re losing institutional knowledge to help us understand the story,” she said. “The person who first covered the story may no longer be there. Often it’s hard to find archives and archival footage.”

Retro Report set up shop in a leaky former storage area in a basement on New York’s Upper East Side seven years ago and began producing short documentaries and webisodes. The reports updated older headline-news stories or looked at the historical roots of new ones. The very first story, published in May 2013, showed how news coverage of a New York garbage barge, adrift at sea for five months in 1987, fueled the modern recycling industry.

Since then, the nonprofit organization has produced a total of 175 documentaries, all of them archived on Retro Report’s website.

The New York Times was an early partner. Retro Report went on to produce stories for major PBS series, including PBS NewsHour, Frontline and American Experience, as well as NBC and The New Yorker.

Retro Report partnered with Georgia Public Broadcasting to produce a TV pilot. Broadcast by GPB’s TV network in May 2018, it focused on stories about women in the workplace with segments looking at the Equal Rights Amendment, the impact of Anita Hill’s testimony and issues facing working mothers.

The pilot opened doors for Retro Report at PBS, where the format evolved into a magazine of short documentaries covering a variety of topics, concluding with a four-minute humor segment.

Borowitz joined the talent roster at Simon’s suggestion. Their professional connection goes back nearly 40 years. In the 1980s, Borowitz wrote for The Fresh Prince of Bel Air and other NBC comedies when Simon was an executive at the network.

Describing the inspiration for his “Now It All Makes Sense” segment, Borowitz said he conceived it “as a sort of Schoolhouse Rock for adults.”

“I would take something that didn’t really make sense, like why we spend millions of dollars on political advertising, for example, and try to explain things using comedy,” he said. His staff of two, producer Sarah Traxler and editor Jackie Soriano, previously worked on The Daily Show with Jon Stewart.

Borowitz’s piece on political ads runs in the premiere. He suggests requiring warning labels on campaign commercials to advise viewers of possible misleading content. In the second episode, Borowitz explains how TV news shows save money and fill time by replacing actual news reports with teasers about news that might occur. Later segments look at the proposed Space Force and the inadequacy of most public apologies.

‘We don’t have a news department’

Many of the stations that received grants for “Retro Local” reports have limited production capacity, and they’re using the funds to test new content models. Each submitted proposals for stories that follow the formula for a Retro Report — opening with a present-day news headline, then revealing the history and evolution of the story, said Cara White, publicist for Retro Report on PBS.

At WFSU in Tallahassee, Fla., the joint licensee’s TV production staff is working with reporters in the radio newsroom on two stories covering issues that affect the African American community, said Kim Kelling, director of content and community partnerships. The collaboration enabled staff from both divisions to build skills in multimedia production.

One WFSU “Retro Local” story examines access to medical care in black communities. It looks back to the 1950s, when a state-of-the-art hospital affiliated with historically black Florida A&M University was built to serve African Americans.

“We’ll probably put this online and on social media before it even hits the air,” Kelling said. She plans to promote the local stories around broadcasts of Retro Report on PBS, but the segments won’t air right next to the national show. Instead, the “Retro Local” stories will run on Local Routes, WFSU’s half-hour weekly cultural show.

TV and radio staff at WKNO in Memphis are also working together to produce two “Retro Local” reports. One looks into a local Superfund cleanup site and another into a consent decree to stop domestic police surveillance.

“We don’t have a news department,” said Bard Cole, WKNO TV producer. Four people work in the TV production unit and two journalists work in the WKNO-FM newsroom. But the grant gave the stations “an interesting opportunity to try something out of our comfort zone,” Cole said. He hired a camera operator to shoot interviews and a researcher to dig up b-roll and archival materials. Katie Riordan, a reporter for WKNO-FM, picked up the TV reporting assignment.

The APM stories include a segment on Alaska’s high rates of sexual assault and the history of how these crimes have been prosecuted. Another looks into the growth of racial and ethnic minorities living in Alaska from 1990 to 2010. The segments will air in two different editions of Alaska Insight, APM’s Friday-night public affairs series.

KEET in Eureka — one of the smallest PBS member stations — will present its “Retro Local” reports on North Shore Perspectives, the monthly public affairs and interview program that Faulk hosts.

The PBS grants give KEET “a chance to do good work without having to break our own bank,” Faulk said. Station staff are also building relationships with community groups that they haven’t interacted with before. “We’re making partnerships where we historically haven’t had any,” he said.

One KEET report examines the Wiyot massacre of 1860, in which white settlers killed women, older men and children of the Wiyot tribe. The community is still trying to make amends for the massacre. The Eureka City Council voted in December to return most of the island where the massacre occurred to members of the tribe.

Another “Retro Local” by KEET describes how Chinese residents resisted expulsion from Eureka in 1885, comparing their movement to today’s efforts to block forced deportation of members of the Hispanic community.

‘We wanted them to have flexibility’

PBS developed the grant program with Retro Report’s producers and staff from Wavelength, the content-sharing platform managed by WNET in New York, according to PBS.

Local stations were given wide latitude in deciding how to present their stories to local audiences.

Inserting “Retro Local” segments into the national broadcast wasn’t a viable option, according to Darnton. “We decided it would be too complicated,” she said. “Also, they would be forced to do a much longer segment than they might want to. We wanted them to have flexibility.”

Although local reports were initially planned to run three to five minutes, many of them are coming in longer, some up to nine minutes.

“They’ve been working with us on content,” said KEET’s Faulk. “We’ll send them the scripts and a rough cut, and they’ll give us input. They’re letting us shape it to fit the local community but, at the same time, they’re giving us the benefit of  their expertise.”

“It’s been a really collaborative project that gave us an opportunity to be mentored by knowledgeable people,” said Kelling of WFSU.

Darnton hopes the eight episodes and station partnerships will lead to more seasons of Retro Report.

“We feel really strongly that our mission is more important than ever,” she said. “Having the eight hours and exposing people to the work we’re doing is a success. It would be amazing for it to continue to grow.”