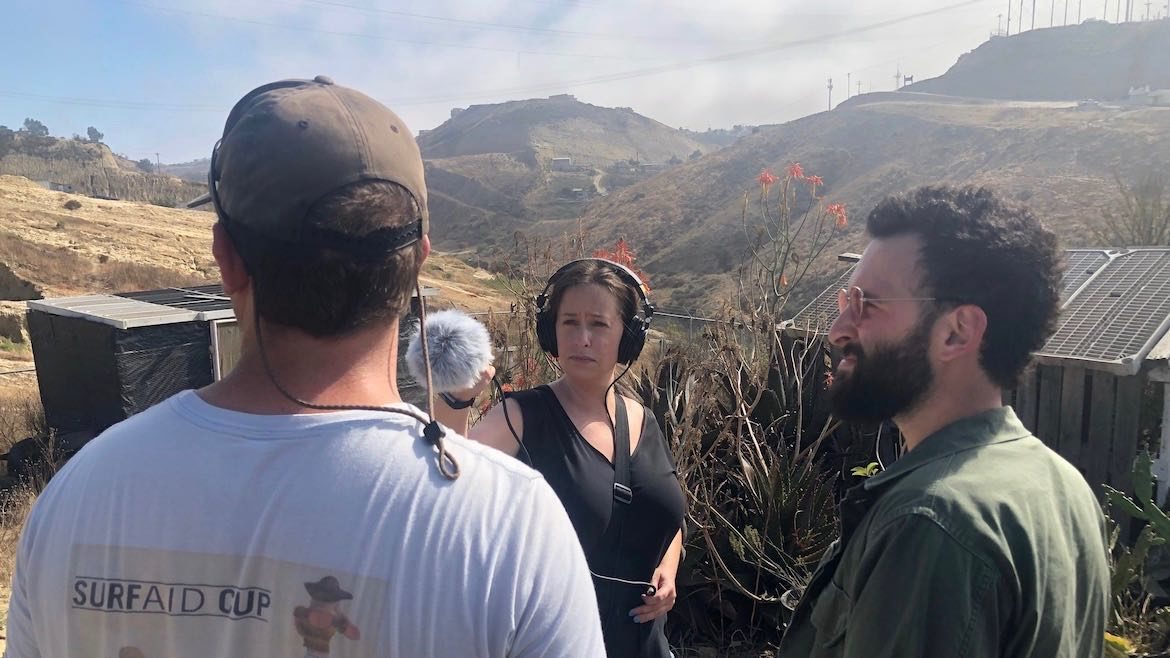 In the past year, KPBS in San Diego has wanted to focus more on telling stories that go beyond news headlines.

One of our first ideas for doing that was to create a podcast about the art scene in Tijuana and San Diego. But before March, we had never launched a documentary-length podcast. Our other podcasts were radio shows that were transformed into podcasts and short-run podcasts from independent producers. In total, we’ve produced 11 podcasts.

So how could we create a long-form, documentary-style podcast with a small team of three people — a producer, host and a sound designer? And how could we find and tell stories from these communities?

The result, our podcast Only Here, launched in March with episodes released every two weeks. The concept for the podcast started as an idea to explore the art scene spawned by people living at the border. But podcast producer Kinsee Morlan said that once she and host Alan Lilienthal took on the project, they realized there were so many more cultural stories to tell than simply covering the arts.

I’m the social media strategist at the station, so my role with the podcast was drumming up awareness and engagement once the podcast was complete, not developing the concept. But I asked Morlan and Lilienthalhow they developed a podcast with a small staff and how they tackled the broad topic of the culture of living at the border in a uniquely intimate way. Here’s what they learned:

1. It takes two weeks at the very least to produce one long-form, documentary-style podcast with a team of three people.

Each episode runs about 22 to 33 minutes in length and includes multiple interviews. Some additional interviews might not make it on the podcast. There’s also writing, editing, re-editing, sound designing and producing.

2. You need to know what story you want to tell before you start going out to do interviews.

“We learned early on that you need a clear message in each episode if you want people to stick around and listen,” Morlan said. “So we do pre-interviews and lots of research before identifying the subjects of our episodes. We know their story before we go out to get their story on tape.”

In one early episode, Morlan said, they had decided to focus on the San Diego Museum of Contemporary Art and the museum’s tours for community members to experience Tijuana’s art scene. She kept coming back to the question: “Why am I featuring this museum, and what am I trying to get listeners to understand?”

She decided to rework the episode to incorporate the fear that some San Diegans feel traversing the border, noting frequent headlines about the high number of homicides in Tijuana, and how the museum tours are meant to assuage those fears and bridge cultural gaps. This became the theme throughout the 27-minute episode.

This humanizes the stories and culture of living at the border.

For one episode, Morlan and her team wanted to feature celebrations in the U.S. of the Day of the Dead, the Mexican holiday to honor and remember deceased family and loved ones. But what about them? What’s the story behind the celebration?

They focused on how a celebration in a Southeast San Diego neighborhood, among the country’s oldest observations of the holiday, has become a tradition to keep the Hispanic culture alive in the neighborhood and what it means to residents. That brought to life the meaning behind the holiday.

4. To find people to tell their stories, rely on word-of-mouth and going to events and community spots.

Morlan and Lilienthal have both lived on both sides of the border. They used that experience and their connections to find their story subjects.

Morlan belongs to Tijuana-based arts, music and cultural groups on Facebook and attends events that she thinks could potentially make a good subject for a podcast. That’s how she connected with photographer John Brady for an episode on how he gained inspiration for his photography from Tijuana’s punk music scene. She also met artist Diana Benavidez and learned about her piñata art by attending a speaking event featuring young artists in San Diego.

The strategy to launch Only Here has proven successful. Since its inception, downloads for the podcast have steadily grown. Only Here averages between 2,500 to 8,000 downloads per episode, with one episode topping 10,000. By comparison, an average episode of a KPBS podcast receives about 1,000 downloads.

Another success: The latest episode had an 83% completion rate. “I think identifying one clear message and building the whole episode around that message is what has helped us get such a successful finish rate on this show,” Morlan recalled.

So what has stood out about Only Here for those outside our building? We asked Diana Benavidez, who was interviewed in an episode. She’s a San Diego artist who creates piñatas with political messages — a giant tampon, for example, or an oversized can of pepper spray — as a way to stoke conversation.

She told us that it’s encouraging to hear a podcast about the stories of those who call both Mexico and the U.S. home from their intimate vantage points — something she believes is missing in the media.

“As someone with binational roots, I’ve always felt that there has been a stigma attached to the border region of San Diego and Tijuana,” she said by email. “Local media has always focused on the negative aspects of the border. I personally think it’s refreshing and great to have the opportunity to show the unique characteristics of our region, specifically through the work and stories of members of our communities which are direct representations of life along the border.”

We certainly haven’t mastered every aspect of podcast storytelling. As Morlan relayed to me, our team is still learning, still experimenting and constantly changing its work. And perhaps that’s the greatest lesson we’ve learned: to not be afraid to scrap a script we spent a week on and start afresh to tell a true story that gets to the heart of its subject.

Laura McVicker is the social media strategist for KPBS in San Diego and has worked in media for 14 years.