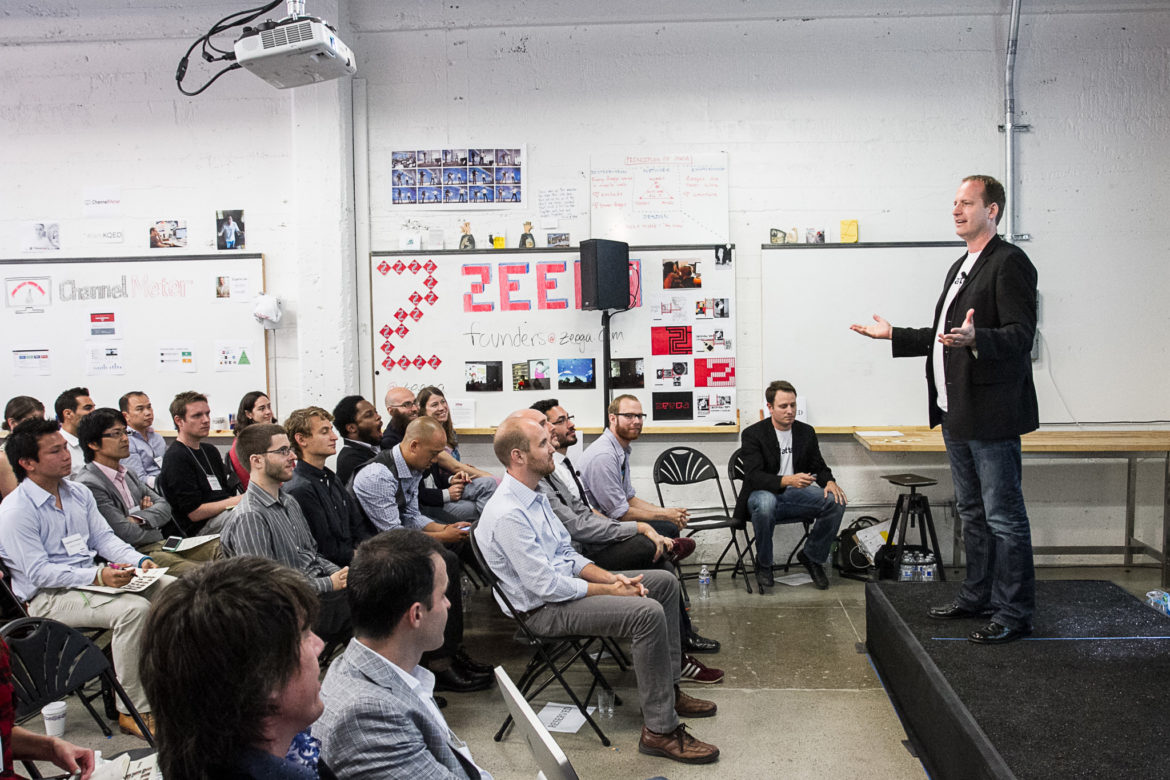 Jake Shapiro, founder of PRX and c.e.o. of RadioPublic, on stage at Matter

When Public Radio Exchange started Matter Ventures four years ago, discussions often turned to how the accelerator program would reflect its mission in its activities. The San Francisco-based venture capital firm backs new media startups that it says can create a more informed and connected society.

At the time, PRX founder Jake Shapiro and then-COO Kerri Hoffman had been tracking the legal status of benefit corporations for several years. As for-profit entities with the characteristics of nonprofits, benefit corporations enjoy the unusual ability to follow mission alongside revenue.

So when Delaware adopted a public benefit corporation statute in 2013, the move by a known corporate haven provided an opportunity.

“In a lot of the discussions we had with partners and investors, the idea of the public benefit corporation really started to take hold,” Shapiro said.

Last month PRX announced that it had launched RadioPublic, a new mobile listening platform, as a public benefit corporation, and that the parent nonprofit would own it — along with RadioPublic’s founding team, employees and investors — through a public-private structure. With the announcement, RadioPublic joined a growing list of public media organizations to adopt the novel, not-yet-fully-tested legal status.

Unlike a standard corporation, whose directors and officers have a fiduciary duty to maximize profits, a PBC allows a company to pursue a profit motive alongside other goals. In turn, it should provide some measure of protection to the directors and officers against shareholders, said John Knab, attorney with Garvey Schubert Barer in Washington, D.C.

“It’s sort of a noble idea, but in some ways it’s more public relations than in reality,” Knab said.

Among public media organizations, the PBC gained widespread attention last year when Ira Glass, host and creator of This American Life, started one to employ the staff of TAL and Serial.

Audience Engine, crowdfunding and audience-engagement software for content creators that debuted in November, was developed by WFMU in Jersey City, N.J.; it is being managed by a PBC WFMU established. Earlier this year the Philadelphia Media Network, parent company to two legacy Philadelphia daily newspapers, became a PBC with a new nonprofit parent that was created to house the newspapers under The Philadelphia Foundation.

“I do think that this is a likely structure for lots of different organizations, not just newspapers or media,” said Alicia Plerhoples, associate professor of law and director of the Social Enterprise and Nonprofit Law Clinic at Georgetown University Law Center. “And one of the reasons you would do it is to align the mission of the subsidiary with the nonprofit.”

Thirty-one states have passed benefit corporation laws, and seven are working on legislation, according to BenefitCorp.com, a resource website for businesses, attorneys, investors and policymakers. RadioPublic; Congera, which manages Audience Engine; and the Philadelphia Media Network are all registered in Delaware. Each follows Delaware’s corporate governance law, alongside the laws of the states in which they operate. In RadioPublic’s case, that’s Massachusetts.

“The first question I have when someone mentions the public benefit corporation is, ‘What kind?’” said Nathan Dietz, a senior research associate in the Center on Nonprofits and Philanthropy at the Urban Institute. “It’s a term that’s not unambiguous. It means various things in different states. And the differences are not subtle in material; they end up with different types of public benefit corporations.”

Hoffman said PRX had been following the evolution of the PBC before deciding to form one for RadioPublic. An earlier version is the Certified B Corporation, a third-party certification held by organizations like Warby Parker, Etsy and Patagonia. Certified B Corps meet certain standards for performance, accountability and transparency. Meanwhile a benefit corporation registered in Delaware isn’t required to publish an assessment of its social and environmental performance against a third-party standard.

Hoffman said B Corps’ status is not legally binding or recognized by all states, which made Delaware’s decision to formalize the PBC a more attractive option.

“It’s not just a stamp of approval on activities,” Hoffman said. “It’s core to the structure.”

RadioPublic has not yet shared what its new mobile listening platform will look like, but is expected to rollout testable versions for media this summer. Its “purpose” reads in part: “We share public media’s educational, artistic and journalistic mission, and the democratic values of open access to information. We are committed to operating a platform that fairly values creators’ work, respects users’ privacy and information rights, and benefits all participants.”

Although the PBC allows an organization to bake its social mission into its charter, it’s also free from the regulations that govern nonprofits. They don’t have to worry about limiting their commercial activity to protect their nonprofit status. “If companies choose not to seek the tax benefit and become public benefit corporations, that could result in less information about do-gooder companies out there,” Knab said.

Plerhoples, who studied the earliest companies to become PBCs in Delaware, found that 35 percent of those 55 companies could have otherwise organized as a charitable nonprofit.

The PBC structure gave PRX two things that entrepreneurs tend to want, Dietz said. “They want access to different resources, and they want everyone to know how committed they are to social missions.” Other benefits include attracting younger workers, such as cause-conscious millennials.

Given the nonprofit structure of public broadcasting, it’s typically been difficult for investors to participate as entrepreneurs, said Erik Langner, managing director of Public Media Co. The PBC opens up new opportunities, but there are some arguments that it creates competition for nonprofits.

“You’re still competing for the same capital,” Plerhoples said. “Charities are competing for donations. Instead, if you’re a public benefit corporation, you can invest in something that’s doing good and actually get a return on it.”

“Most not-for-profits, they’re pursuing something that’s purely a charitable mission,” Freedman said. “There’s a huge chasm between a charity and a startup.”

A signal and a safeguard

Both Shapiro, who leads RadioPublic, and Hoffman, who replaced him as PRX c.e.o., describe the PBC as a signal and a safeguard. As a signal, it’s a genuine reflection of the company’s values and how it sees its purpose. As a safeguard, it’s binding.

“It actually does have legal standing,” Shapiro said. “It’s not just something you can wave away.”

Public Media Co. is working with a few different organizations that are considering the PBC model, Langner said. Investors are demanding it because they see potential to grow a business more rapidly than under a traditional public broadcasting entity. Still, it’s not for everybody.

“First and foremost, what are the expectations of the shareholders?” Langner asked, while rattling off some key considerations. If bringing on investors is crucial to how the company will be capitalized, it’s important to find patient investors who understand the mission. They should also be aligned with management in defining the product, how it will scale and how much will be invested back into the business. Those expectations should be managed, along with the likelihood of needing to raise additional rounds of capital and consideration of how that fundraising will interplay with the relationship with those founding investors, Langner said.

Freedman of WFMU, which registered Congera in 2014, advises that it’s important to consider where you’ll derive the bulk of your funding when setting up a PBC. “If the majority of your funding is going to be coming from charitable sources, then it’s really not a good idea,” Freedman said.

Not to mention that PBCs can be a hard sell.

“They’re so new that some investors are wary because they’ve never heard of them,” Freedman said. “Some investors are also wary of seeing a not-for-profit own a subsidiary organization. That’s also unusual enough that it gives some people pause.”

Plerhoples says she’s much less skeptical of PBCs with nonprofit parents because the relationship tends to strengthen the alignment between the organization and the mission. RadioPublic, Congera and the Philadelphia Media Network all chose this structure. Still, it’s unclear how the courts will interpret PBCs’ duties, Knab said. Investors do want to see their money turn a profit.

“There could be some cases out there where the investors say the directors and officers did not pursue profit enough; they emphasized the public benefit too much,” Knab said.

For Shapiro, PBCs lack of testing through the courts only introduces another element of risk.

Clarification: This story has been revised to clarify the ownership of RadioPublic. It is jointly owned by PRX and RadioPublic’s founding team, employees and investors.