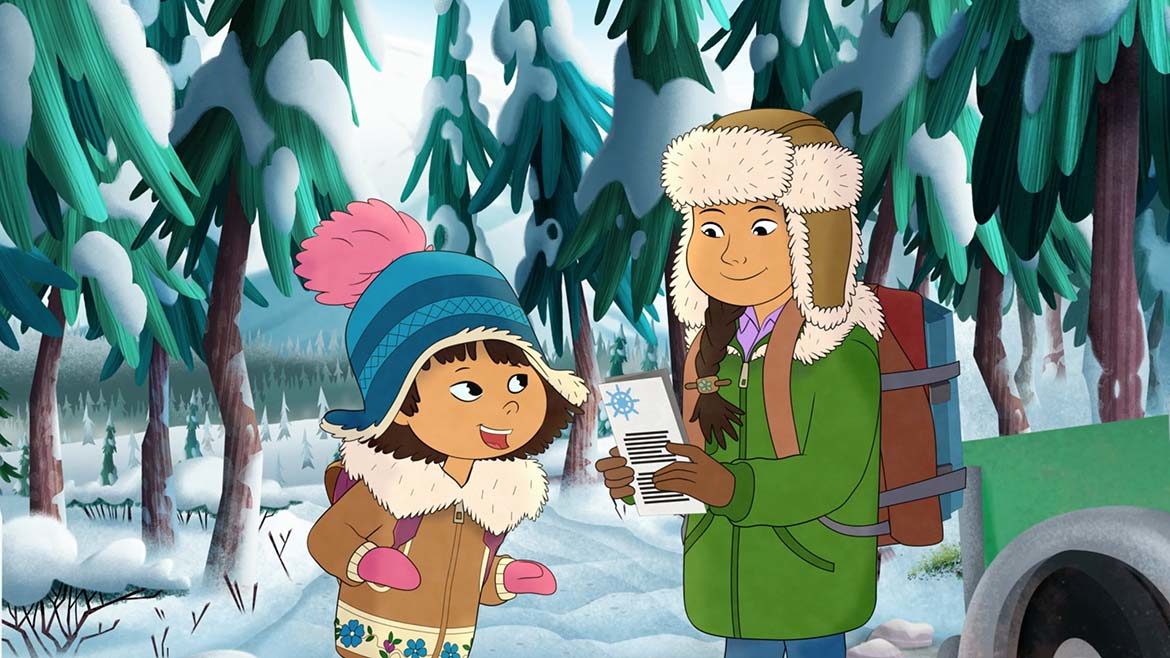 Molly and her mom check a map.

In a first for PBS Kids, the forthcoming TV series Molly of Denali has already begun unspooling stories about an Alaska Native girl growing up in a family of adventurers near one of the world’s tallest mountains.

A prequel podcast that launched in May began introducing children to Molly, a 10-year old who helps her parents run the Denali Trading Post in the fictional Alaskan village of Qyah. The eight episodes, releasing weekly through July 11, help set the stage for the animated PBS Kids series.

The podcast tells stories about how Molly’s parents came to run the trading post, and how the dog Suki became part of her family.

Molly’s life is full of colorful characters and adventures. Her mother is a bush pilot and her dad is a wilderness guide. She spends time with her grandfather, a volcanologist, and her friend Tooey, who takes her dog sledding.

The podcast blends the oral storytelling traditions of Alaska Natives with the adventures of the modern-day Molly. “This format allows Molly’s world to feel so alive,” said Dorothea Gillim, creator and EP of Molly of Denali at WGBH in Boston.

Gen Z Media, which specializes in creating scripted podcasts for kids, produced the podcast series in a partnership with WGBH and PRX.

As podcasts for children begin to attract bigger audiences, WGBH and PRX hope that the audio stories will appeal to both parents and children. “We’re taking a 360-degree approach,” Hoffman said, describing the marketing strategy behind the show’s rollout. “Part of that takes the form of promotion for family-friendly audiences on channels like social media and parenting blogs.”

Gillim sees an opportunity to bring more children to Molly of Denali by presenting the stories in two formats. “We’re trying to reach kids wherever they are,” she said. “They’re watching live TV, they’re streaming TV and — now more than ever — they’re listening to podcasts.”

Gillim also recognizes the important connection that Molly’s story has to the auditory format. “Podcasts and audio give us this great opportunity to explore some of the oral traditions and oral storytelling of Alaska Natives,” she said.

WGBH developed and produced Molly of Denali with grant support from Ready To Learn, the Department of Education program that supports public TV’s early childhood education work. Additional funders include CPB and PBS, which manage RTL funds under contract to the Department of Education, the Canadian Broadcasting Corporation; WGBH; and Atomic Cartoons, the animation studio working on the series.

Gen-Z produced The Unexplainable Disappearance of Mars Patel, which won a Peabody; The Alien Adventures of Finn Caspian; and The Mayan Crystal, among other children’s podcasts.

In addition to the podcast and the PBS Kids series, WGBH has partnered with HarperCollins to release children’s books about Molly’s adventures.

“There’s so many rich opportunities for extension,” Gillim said. “This is a story that can really translate into any format.”

Though the multiformat launch of Molly of Denali is new to PBS Kids, Hoffman doesn’t see the podcast prequel as an experiment.  “This isn’t a test run as much as it’s the right tactic for this project,” she said.