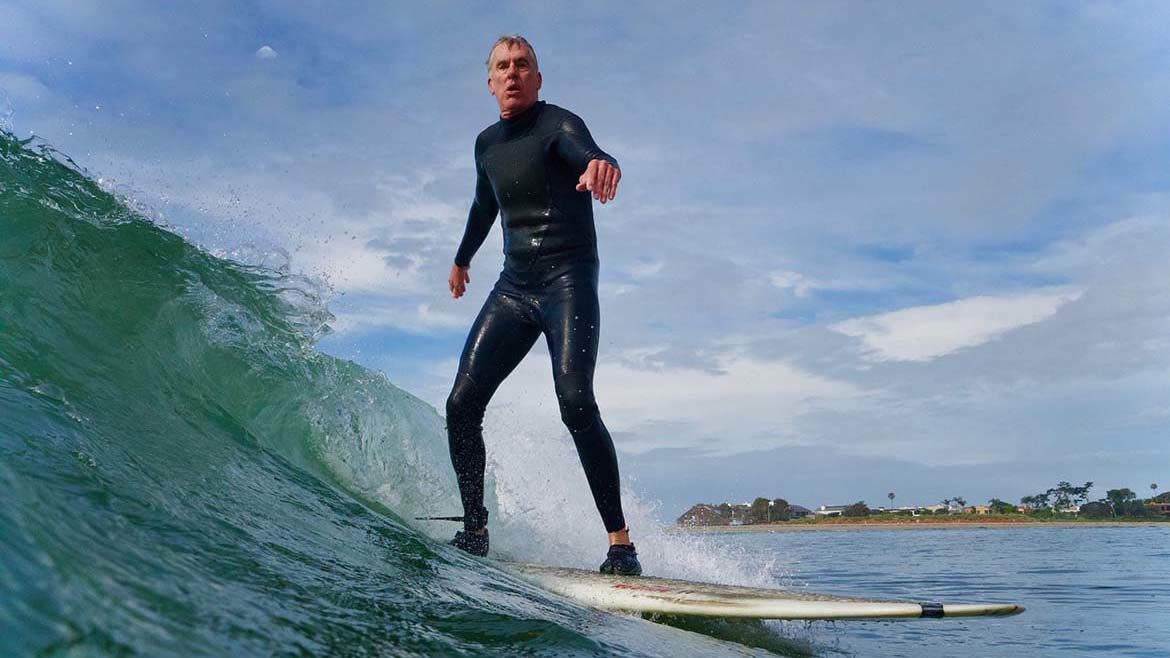 Since retiring from KPCC in February, Davis has discovered that "weekday surfing rocks."

A big shift is taking place in public media, and it’s not just digital disruption, mergers and acquisitions, or the explosion of content competing for our viewers and listeners.

The change I’m talking about is demographic. Baby boomers who have spent decades in the field are retiring, and they’re turning over leadership of many local stations — sometimes to a new, more diverse generation, and sometimes not.

As Current’s Executive Director, I’ve been reaching out to these leaders and lifers as they prepare to step out of the spotlight and away from the mic. I wanted to hear their reflections about their careers, to ask whatguidance they have for newbies coming into public media or into leadership, and to learn about their concerns about the future of public media.

So I asked a series of questions to departing station leaders, and they answered them. And we’re introducing this series, Exit Interviews.

Our first Q&A is with Bill Davis, who in February donned the title “President Emeritus” of KPCC/Southern California Public Radio. Bill moved into public broadcasting leadership in 1984, when he served as GM of KALX-FM, the student station at University of California at Berkeley, home of the Free Speech Movement. After that formative experience, he moved to WBFO in Buffalo, N.Y., where he became GM. After two years in Cold Town, Bill moved south for a decade as GM of WUNC in Chapel Hill, N.C. He later headed to NPR’s headquarters in Washington, D.C., to become VP of programming.

In 2001, he decamped to Los Angeles to surf the Pacific Ocean and to make waves at KPCC in Pasadena. The station is operated by Southern California Public Radio, an affiliate of American Public Media. During his 18-year tenure as president, Bill put KPCC on the map locally and nationally, building an innovative multiplatform news service, quadrupling the audience and growing the membership base to nearly 75,000 listeners. Under his leadership, KPCC nurtured an inclusive and diverse workplace, dedicated resources to growing the Latino audience and modeled meaningful community engagement.

I took Bill Drummond’s “Introduction to Broadcast Journalism” at the University of California at Berkeley’s Graduate School of Journalism in the spring of 1983. It was Professor Drummond’s first year at Cal’s J-School, and this was the first time he had ever taught the course. Bill’s been more of a friend and a colleague than a mentor, but he has had a more significant impact on my professional career than anyone else.

What do you consider your single most important accomplishment at KPCC?

KPCC’s continued existence is my single most important accomplishment in Los Angeles. Now that the station is successful, it’s easy to forget that almost everyone in public media predicted that we would be a complete failure. We had a tiny audience and an even smaller membership base. We were losing money. We had a transmitter with less wattage than an EZ Bake oven. And the conventional wisdom was Angelenos didn’t care about local news.

Marc Cooper, a prominent journalist who now teaches at the University of Southern California’s journalism school, said at the time: “Local news doesn’t mean a damn thing to the average listener. When you tell me you’re putting your focus on local news, I’ll tell you you’re from out of town.”

We certainly flipped that notion on its head.

What was the funniest thing that happened during your career in public media?

My time as general manager at KALX-FM in Berkeley, was the funniest thing that ever happened to me. Period.

I have lots of stories about that. The graduate student editor of the program guide emphasized the KALX’s commitment to free speech by reprinting Charles Coypel’s “Leda and the Swan” — with Zeus in full tumescence — on the cover. The station’s program schedule was printed as a centerfold on top of William Giger’s “Penis Landscape.” That didn’t go over too well with U.C. Berkeley’s administrators.

Then there were the station IDs from Charles Manson. The DJ who overdosed on heroin while she was on the air. The bomb and credible death threats we received when we interviewed the founder of White Aryan Resistance, Tom Metzger. And the time when I had to threaten the university with a lawsuit after U.C.-Berkeley police took us off the air during our live coverage of student divestment protests on campus.

Working at KALX was nothing if not entertaining.

What’s the No. 1 piece of advice or key message you have for people entering the public media field today?

When I speak to journalism classes, I tell the students two things:

Public media’s greatest achievement is that we have brought this incredibly curious, thoughtful, caring, insightful, intelligent and wise audience together on a daily basis. And the great irony is that we almost never ask them for their insights or their expertise or how we might learn from their lived experience.

This is beginning to change, but public media will need to truly engage with — and learn from — our audiences if we are to fully realize our mission of public service.

Patience. Anyone who knows me knows that I am an impatient person. I’ve worked hard at reconciling my personal sense of urgency with the understanding that it takes time to bring others along a challenging journey to an uncertain destination.

What is your biggest regret or mistake — or the hardest thing you tried to do — and perhaps failed? Please share your takeaway from that experience.

One of the defining experiences of my life was getting a gentlemanly D-minus in my high school French 1 class. The only reason I got the D-minus was because the teacher didn’t want me in her class the following year. So, I’m pretty comfortable with failure — and I’ve never had to worry about being the smartest person in any room.

I have failed innumerable times during my career, but I’ve also learned a lot from those failures and have tried to share what I’ve learned with others in the public media system. My efforts to expand and diversify our audiences have always fallen short of my own expectations. Ditto with the diversification — I prefer the term “normalization” — of our staff, generally, and the newsroom, specifically. Both of these are particularly painful.

If there’s a takeaway from this, it’s that every organization in public media has a lot of work to do to more accurately reflect the ethnic, religious, cultural, gender and socio-economic diversity of the communities and country we aspire to serve. We need to be more diligent and intentional in these efforts — and we need to hold ourselves accountable if we fail to do so.

My aspirations for public media are also my worries. There is so much unrealized potential in public media. We are the premier providers of public service journalism and civic engagement in our country at a time when the need for both has never been greater. Local newspapers across the country are being shuttered, and in many places we are the most important source for local news coverage — not to mention national and international coverage. Digital start-ups are discovering the importance of loyalty and usage, and public media — public radio in particular — are loyalty-generating machines. Commercial media and content platforms are discovering membership models, and we have five decades of experience and expertise. We have tremendous potential to improve the breadth, depth and quality of our public service even as we expand and diversify our audiences and our revenue streams.

This is where my worries appear: Public media’s success has not gone unnoticed by commercial media competitors, or by the FAANGs (Facebook, Amazon, Apple, Netflix, and Google). Public media organizations in this country are under-capitalized and under-resourced. We’ve already seen an exodus of talent to both commercial media and the digital platform players.

We need to increase our operating revenues (membership, underwriting, etc.) while simultaneously making a more compelling case to philanthropic funders — particularly the so-called “impact” philanthropists — to provide the investment capital to ensure that our public services are ubiquitously available on digital platforms. That’s a tall order.

If you could, how would you restructure the public media system?

I’m not sure that restructuring the entire public media system is desirable — but I’m fairly certain that it is impossible. I think our collective time and intellect would be better spent strengthening those aspects of the public media system that play to our traditional strengths: public service journalism (both local and national), civic engagement, children’s educational programming, and systematic interconnection.

There’s been a lot of ink/pixels dedicated to the first three, but we haven’t focused enough of our time, attention and system investment in creating the digital-age equivalent of the public radio satellite system. We need to create a digital infrastructure that allows public media to achieve scale efficiencies in content creation, content distribution, engagement metrics, fundraising databases, etc., while simultaneously having the distributed capacity at local stations to learn from our communities and audiences so that we can better serve them.

Weekday surfing rocks! In all seriousness, I don’t think it’s possible for me to thank enough people for putting up with me for the past two decades at KPCC and at NPR, WUNC and WBFO — and KALX in the two decades before that!

I would be remiss if I didn’t thank Ron Olson, Gordy Crawford, Bill Kling and the SCPR Board for hiring me back in 2001. It was a quixotic undertaking — a fool’s errand, really. But, apparently, I was the right quixotic fool for the gig. I am eternally grateful to them — and to my colleagues at the station — for the friendship, support, and kindness they have shown to me during the past two decades.