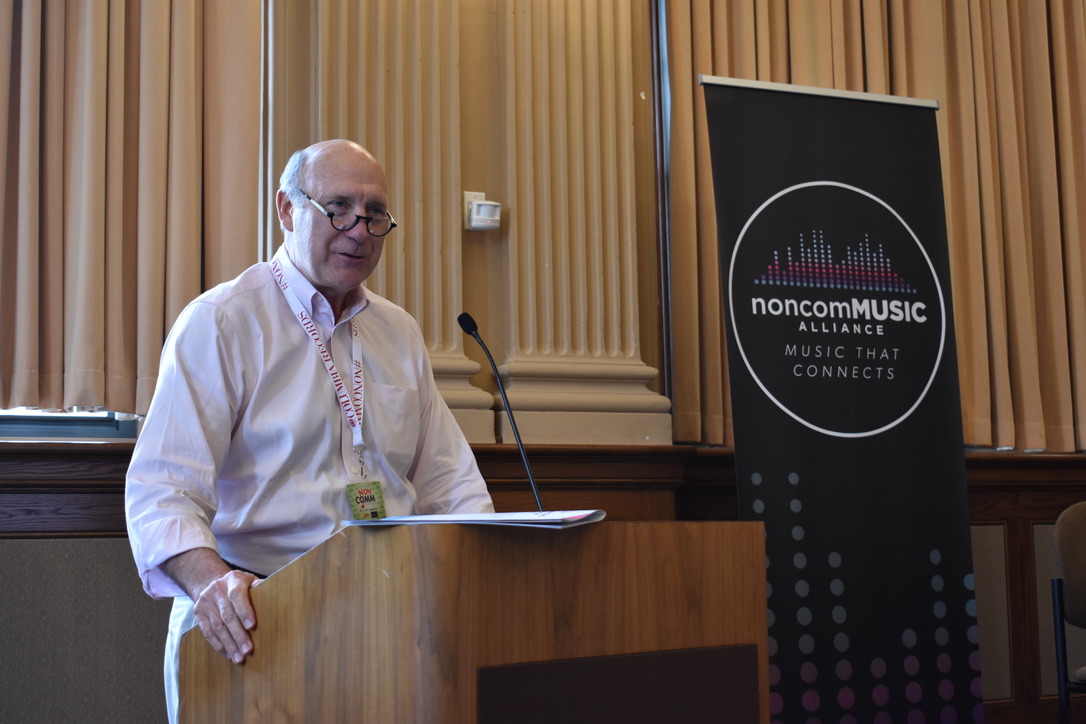 Mike Riksen, NPR's VP of policy and representation and executive director of the noncomMusic Alliance, speaks May 14 at the Public Media Music Summit in Philadelphia.

PHILADELPHIA — An inaugural conference for public media’s music stations gave participants a rare chance last week to discuss common concerns among their organizations, including changes to copyright law that would help them innovate on digital platforms.

Held May 13 and 14, the first-ever Public Radio Music Summit was organized by the noncomMusic Alliance, a collective launched by NPR and stations last year to advocate on behalf of public radio’s music stations. Among their shared priorities, the stations’ use of music in podcasts, in-studio performances and other programming “present licensing and rights-use challenges that, over time, we hope we’ll be able to present in a clearer picture to policymakers on the Hill,” said Mike Riksen, NPR’s VP of policy and representation and executive director of the Alliance, in an interview with Current before the event.

Conference attendees shared examples of the obstacles they face due to copyright law. “There’s great confusion around what’s legal and what’s not,” Suzanne Nance, CEO of All Classical Portland, told Current. Her station had been offering a complete archive of a film-music show online when it found out that it was in violation of copyright law, Nance said. It now posts only episodes from the last two weeks.

“We want to make sure that everyone has access to that program and other programs people are consuming on-demand,” Nance said. “… Right now, it’s not as clear-cut as we’d all like it to be, and we need to make sure that we can provide access. There’s a lot of gray areas.”

As part of the advocacy effort, the noncomMusic Alliance released a report May 15 that aims to explain public radio’s music stations to policymakers and music industry representatives. It provides an overview of the 734 stations that feature music as at least 30% of their programming, reaching a combined 20.5 million listeners weekly.

The report is “a first step” in the Alliance’s effort “to try to lay the groundwork for future policy initiatives,” said Joni Lupovitz, NPR’s senior director of public policy, during the summit’s opening night. Lupovitz led work on the report.

It’s also important for advocacy on Capitol Hill, Riksen told attendees. Most Hill staffers have solid relationships with local music stations, Riksen said, but don’t know that “public radio has a string of public radio music stations in just about every community across the country.”

“When we started telling them that, they started looking at us not as being voices of NPR and NPR Music, a really important part of the public radio music scene, but in fact something much more significant, much deeper and more connected to communities than just a single station,” Riksen said.

The Alliance will release two more reports on music stations, Riksen said, with the next one measuring and highlighting their impact.

The two-day summit marked the first gathering for public radio music stations of all genres since 2011, when the Association of Music Personnel in Public Radio held its final conference. The organization, which focused mainly on classical stations, merged its conference into the Public Radio Program Directors Association conference the following year.

Last week’s summit preceded the Non-Commvention, an annual conference at WXPN focused on public radio’s Triple A stations, and drew nearly 100 attendees. Riksen said he hopes the summit will become an annual event.

Another goal of the noncomMusic Alliance is to raise the profile of public radio music stations of all genres, Roger LaMay, GM of WXPN and a member of the Alliance’s advisory council, told attendees.

Doing so “not only reinforces and sets up” advocacy in Washington but helps “to position us as a group and as a force and … have the profile and the clout that’s commensurate with the audience share and the significance of the work that we do,” he said.

Station leaders heard from Capitol Hill insiders that intellectual property issues are among the few issues in Congress that enjoy bipartisan support. Jason Everett, special counsel at law firm Covington & Burling and former Democratic deputy chief counsel to the U.S. House Committee on the Judiciary, said that with intellectual property issues, there’s a “unique opportunity to work to get stuff done, because we work together on a bipartisan basis.”

Bill Johnson, GM at WRTI in Philadelphia, told Current that he would like more leeway to play cover versions of songs on jazz and classical station’s digital platforms. WRTI has restricted studio performances to include only original material “to minimize compliance issues,” Johnson said.

Studio performances with original material “really serve our discovery and our curation values,” Johnson said. “But I think there are things we’re missing out on because we don’t have an efficient way to allow people to come in and perform” if they have a “great take on a standard,” he said.

WRTI got involved with the noncomMusic Alliance because “we need to be working on things that we can’t do alone,” Johnson said. “And I think a lot of us recognize that. There are certain things that are only going to happen if we’re coming together and talking about mutual issues.”