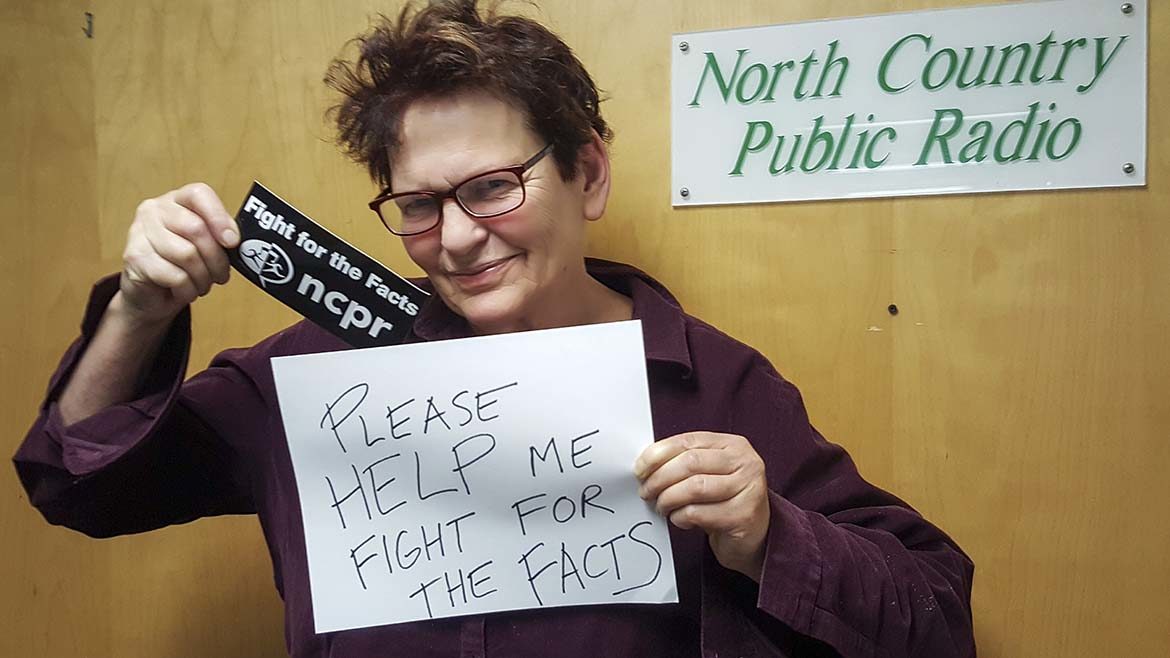 Rocco, manager of North Country Public Radio since 1985, has described her job as "doing anything I can so that everyone else can have fun and do good stuff.”

A native New Yorker — with the accent and moxie to prove it — Ellen Rocco is a product of the 1960s. Her resume includes stints at the Peter Max studios, the New York Department of Social Services and the American Academy of Poets. It even mentions that Ellen was a civil rights and peace activist who “bummed around Europe” in 1968.

Ellen opted for the rural life in 1971 when she moved to Canton, N.Y. There, she became owner of Red Truck Farms, where she gardened, sold hay and raised sheep and horses. She also  raised children, waited tables at a Best Western and worked as a substitute teacher. And, she committed acts of journalism and fiction writing.

She joined North Country Public Radio as development director in 1980 and became station manager in 1985.  She has been a maverick, outside-the-box thinker and doer — and a royal pain in the ass to the public media establishment — ever since.

That sentence might offend you, but Ellen would probably consider it a point of pride. Just ask her former comrades who served with her on the boards of NPR and the Association of Independents in Radio. She’s a radical whose impact on public radio, on staff and volunteers at her station, and on her own community cannot be underestimated. Her “North Country at Work” project was a finalist in Current’s Local that Works contest.

She once told Jay Allison in Transom, “As station manager, my job is to do anything I can so that everyone else can have fun and do good stuff.”

My small local station was recruiting a development director to expand its financial and service reach into the community and beyond the college campus. I was hired because of my background in community organizing and activism. Plus, I could speak and write.

What do you consider your single most important accomplishment at the organization you are now leaving?

Over the last four decades, we have built one of the premiere news organizations in the public radio system.

We built a single, 3,500-watt station into a 34-transmitter network serving one third of New York State. We did it on a shoestring — sometimes with federal assistance but always with ingenuity and thrift. That expansion was led by our chief engineer, “Radio Bob” Sauter.

On one occasion, in the tiny village of Long Lake in the central Adirondacks, Bob approached the town supervisor to ask if we put a transmitter on a  tower located on a nearby mountain, to bring broadcast service to the village. He offered Bob use of the facility where emergency services and related telecommunications equipment was located. Bob climbed the mountain and found the “facility” was a refrigerator.

Bob made some improvements — including adding some screening for summer ventilation — and eventually we bought a small hut which we donated to the village.

What’s the No. 1 piece of advice or key message do you have for people entering the public media field today?

Remember: we serve the American public — and it is our job to be rigorously honest, fair and transparent.

It took me a while to figure out that the real job is to find resources for talented staff and innovative ideas — and to fight to protect independent journalism.

What is your biggest regret or mistake, or the hardest thing you tried to do and perhaps failed at? Please share your takeaway from that experience.

About 20 years ago, we tried to do a digital project for teenagers. I won’t go into the grim details, but the big takeaway was this: in order to serve distinct cohorts or audience segments, make sure people from those groups are directly involved in shaping and making the service.

That takeaway is particularly relevant today as our system faces a need to develop a more diverse content and staff profile.

Let’s stand firmly on a belief in the American public and its ability to use fact-based news and information to make good choices about the world around us. Honesty and journalistic rigor are essential to the trust relationship we have with the public. That means we must maintain — and always aspire to — the highest standards, regardless of what is going on in the world around us.

We must always remember we serve people — it’s not about us. It’s about what enhances the lives of the people we serve, whether with news and information or cultural and music content.

If you could, how would you restructure the public media system?

We have to change the financial and governance relationship between NPR and its member stations. NPR must be able to ask for very large gifts from sources across the nation; stations must see a reduction in program fees.

This may seem mundane, but a healthy station system is still at the heart of bringing public media to everyone, and of bringing the voices of all Americans to a national audience.

I can’t wait to see/hear what the next generation of public media people do! I know there’s so much new talent and commitment, it’s going to be a transformative era for public media.