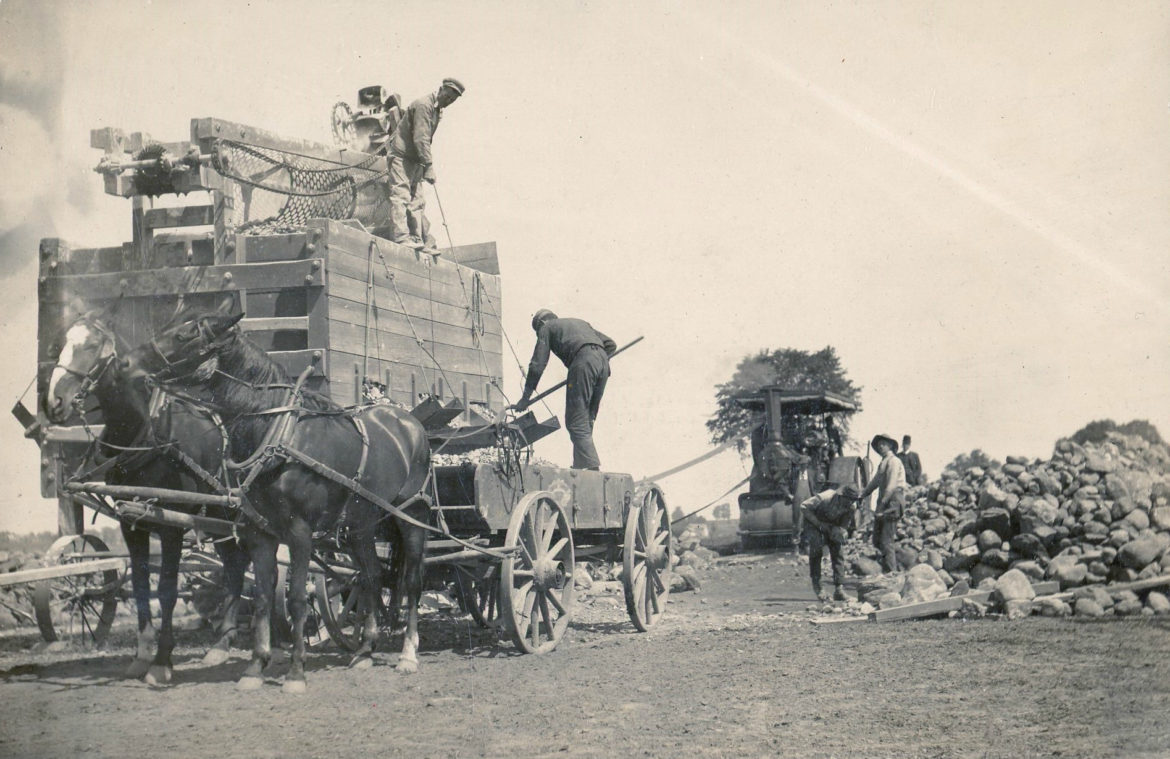 In a photo from the 1910s, construction workers use a horse-drawn wagon and steam engine–powered stone crusher to make road fill. The construction of homes, businesses and infrastructure employed many North Country residents during industry boom times from 1850 to 1950.

Every community arises out of the work its people do, says Ellen Rocco, station manager of North Country Public Radio. Work can be the reason why people come to a place, why they stick around or why they leave. As opportunities to work change, the nature and culture of the community changes too.

NCPR was looking for a project that could involve everyone within its coverage area reaching more than 200 hamlets across a geographic area that’s the size of two Vermonts. The realization that everyone shares the need to work led to a multimedia project collecting photos and sharing the stories behind them.

For North Country at Work, NCPR staff visit communities to collect photographs of locals — you guessed it — working. The photos span the earliest days of permanent settlement in the region to the present. NCPR is building the collection through an open-source platform. It expects to share a beta version publicly in August.

Photography became a popular medium in the 1840s and 50s, which happens to coincide with the development of logging, among the North Country region’s earliest industries. NCPR is reaching out to local institutions, including humanities councils and museums, to collect the photos and produce audio oral histories. So far, Rocco estimates NCPR has visited 30 communities, scanned up to 4,000 images and produced about 60 audio pieces, including some for morning broadcast. In addition, an intern is producing short videos from audio/video combinations. 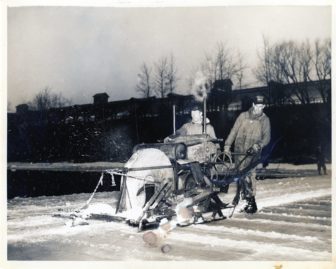 Workers in Carthage, N.Y., cut ice with a kerosene-powered blade during an ice harvest in 1947.

The pieces described life in the region when logging and tourism powered the economy, the history of the dairy industry, experiences of dairy workers and a strike at a paper company town, among other topics.

The project speaks to people’s historic sense of identity. Amid calls to “Make America Great Again,” it addresses the loss of jobs in rural America, a sensitive issue when it’s on the national agenda.

“We are trying to bring this forward into a contemporary conversation about work that is not about Republicans and Democrats,” Rocco said during a panel at July’s Public Media Development and Marketing Conference in San Francisco. Political affiliation “simply does not come up. These are conversations with our neighbors and people who share our communities who bring their stories and we talk. You start with the weather and you go from there.”

Next year, NCPR intends to hold community conversations around the region to display the photos and discuss local history. The station plans to invite people from a variety of trades —  miners, loggers and farmers who powered the region’s traditional economy, and those who are creating new jobs today. Entrepreneurs are re-purposing old industrial buildings for smaller scale manufacturing and production, for example, or running farms that cater to the local food market.

NCPR began developing this project four years ago, but couldn’t find an existing digital platform to manage the content. The team recognized early on that a simple Flickr account or webpage would be inadequate, Rocco said. So over the past year, NCPR has raised and spent about $47,000 to coordinate the project and develop a web-based platform.

“We’ve come to think of this tool as the thing nobody has, but everybody needs,” Rocco said.

For now, the content can be viewed at www.ncpr.org/work.

The tool that’s in development, called Diviner, can be used for a variety of themes, Rocco said. A visitor lands on the homepage and can enter a search term or choose to set up a category of content to view. “In our case, if you’re searching for the history of work, you have the immediate option to search location by county and time period and then narrow it down,” Rocco said.

The user can choose among a more refined set of tags, such as specific towns and types of work. At the bottom of each entry page, the interface displays related items that also fulfill the original search criteria, Rocco said.

Once the beta version is released, NCPR will spend a year refining the platform and making sure it’s truly white label and easily shared via WordPress, Rocco said. 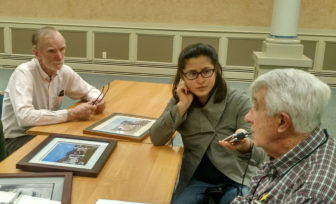 As NCPR staff travel across the region to collect photos and oral histories, town museums and libraries are happy to unearth “buried history,” Rocco said. One big challenge so far has been negotiating licensing issues. NCPR is working with larger institutions to provide a flat fee of $1,000–$2,000 for 500–1000 images, giving proper credit to the appropriate institution and linking to its web content from NCPR’s site.

During site visits, NCPR staff typically scan between 5 and 10 percent of the photos held by any institution, Rocco said. Most historic collections in local communities are portraits and photos of buildings and landscapes, with little relating to working life.

Design plans for Diviner call for it to eventually handle submissions from outside NCPR, allowing institutions and individuals to upload photographs themselves. 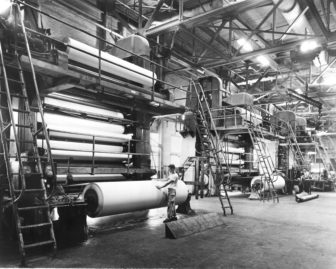 In a photo circa 1950, a man operates a papermill.

Also, devise an approach for collecting content that engages relevant leaders and community members, and identify those people on the ground in each location.

2. Pick a broad topic that touches as many lives as possible.

“Maybe it’s not universal like work, but do not narrow your focus. It sounds scary …, but that’s what generates interest and excitement, when everyone can play.”

3. Identify content that can be repurposed on a variety of platforms.

Gather elements that can be shaped for digital and broadcast. NCPR is scanning photos at a variety of ranges depending on their level of detail.

This article is the latest in our series Local That Works, an initiative highlighting innovative and replicable content, engagement and revenue strategies of local public media stations.