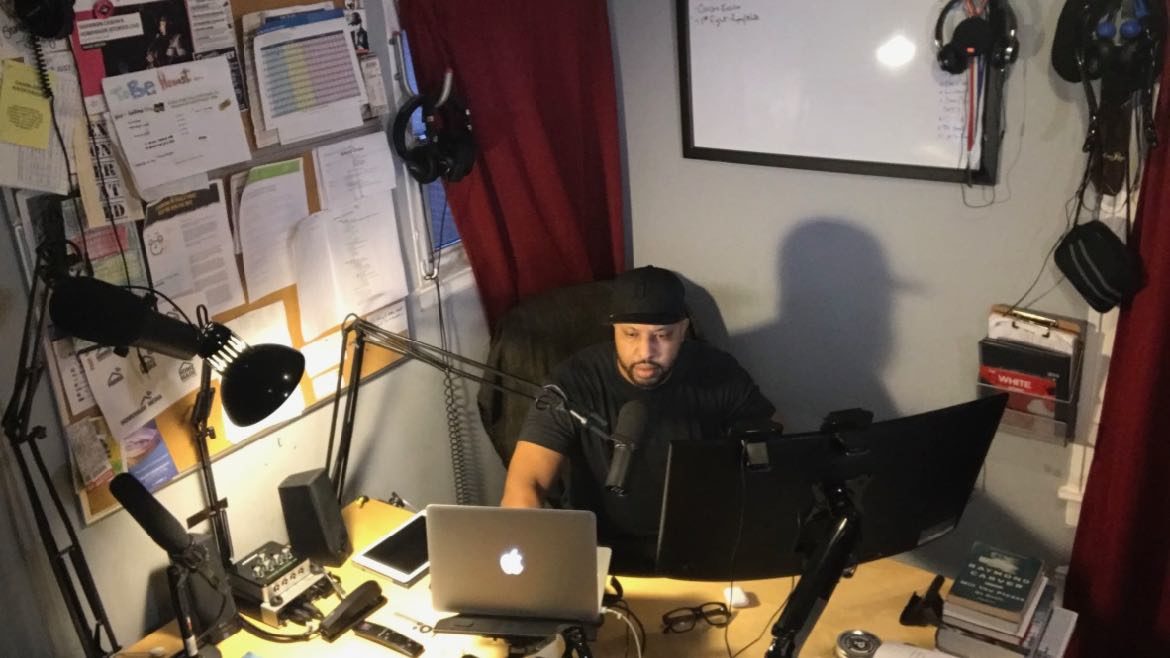 Cason at work in his home studio.

Shannon Cason never imagined himself on public radio. In fact, he’d never heard a public radio show until about five years ago. But his outsider status made him the perfect host for The Trouble, a compelling narrative nonfiction podcast produced by Chicago’s WBEZ.

“We came up with the idea for The Trouble based on my storytelling,” says Cason. “I’m not scared to go to troubling places.”

It’s an unusual formula: Take a storyteller from far outside the traditional pipeline of public media who’s used to telling his own stories at his own pace. Add a team of on-demand audio producers who have created deeply researched investigative podcasts like 16 Shots and Making Obama. Divide by the standards and ethics of public radio.

During its 10-episode run, released from February to October, The Trouble delivered gripping stories that transport the listener from intense experience to intense experience. The buildup to each story’s “trouble” feels like clicking up to the top of a roller coaster, with each twist and turn on the way down delivering gut-punching moments.

For example, the moment when the man who spent 17 years in prison discovers he has a look-alike with the same name who committed the crime he’s been sentenced for. Or when the Louisiana woman who says she was called by God to donate a kidney realizes she’s lost her health, her marriage and her home to save the life of a stranger who’s turned on her. And when a charismatic former Detroit public school principal describes how close she came to committing suicide after being charged with taking $58,000 in kickbacks.

Each episode was built on Cason’s interviews with people in different types of trouble. “I’ve done plenty of talking about my own troubles,” Cason said in the first episode. “But I want to talk to other people about theirs. So this is a show where I get to do that. And talk to people who have really found themselves in a big ole mess.”

Cason has built a career based on his honest, raw storytelling style. He won The Moth’s Grand Slam Championship with the story of his gambling addiction and became a favorite on Snap Judgment. In 2009, he launched Homemade Stories, an independently produced podcast that gave him a chance to hone his writing and audio skills.

A friend who worked at WBEZ told him in 2014 that the station was looking for podcast content. After a series of meetings, the station became a co-producer and distributor of Homemade Stories, a role that lasted just over a year and also spawned an hourlong broadcast special. Cason still independently produces the podcast, a mix of personal and fictional stories.

“With Homemade Stories, it was me giving them something, and then they polished it,” Cason says. He writes from personal experience, at his own pace. But The Trouble was a collaborative effort from the start. After he returned to producing Homemade Stories independently, there was still energy around creating a new project with WBEZ. Cason brainstormed the concept for the show along with a team of station producers. He found himself one element of a team, working within a public media framework.

“Having brainstorming meetings, pitch sessions, having other producers listen and give feedback — all those things were eye-opening to me on the process of coming up with the episode,” says Cason.

For the first six episodes, producers scoured regional news for stories of trouble and pre-interviewed subjects before introducing them to Cason. When Cason received a full dossier on his first interviewee — the school principal convicted on bribery charges — he was surprised by its depth.

“This is the first interview I have to do, and I’m doing it with this lady who’s about to go to prison for taking kickbacks,” Cason remembers. “And I’m totally green to doing interviews! I went in from that standpoint that was going to be comforting to her. I’m not going in thinking, I’m a green interviewer. I’m a person who loves storytelling, and I want to hear your story.”

In that interview, Cason sat face to face with KC Wilbourn in her grandmother’s retirement home. “It was very intimate. We were eye-to-eye and really honest,” Cason remembers. Both got emotional.

“I was going to send my son to school, and I was going to blow my brains out,” Wilbourn said, describing her state of mind the night the FBI raided her house. “But I was scared.”

“… If the story takes a turn, where they’re not the good person in that story, I still want to hear it. And I’m not judging it. Because I’ve been that person. I’ve been the wrong one.” — Shannon Cason

“Was it only the fear that saved you from doing that?” Cason asked, softly.

“A conversation like the conversations he has on The Trouble are not the same as a reporter or a standard journalistic program host conducting a traditional interview,” says Steve Edwards, VP and chief content officer at WBEZ. “We want to explore narrative and motivations in a really authentic way.”

Cason lent his authenticity to the show through his own dogged pursuit and understanding of what makes a great story, as well as not judging his interviewees. “Even in my stories, I don’t have to be the good guy in this story,” he says, recalling a story he told about a time when he bullied a kid at his school. “So if the story takes a turn, where they’re not the good person in that story, I still want to hear it. And I’m not judging it. Because I’ve been that person. I’ve been the wrong one.”

The Trouble’s listeners responded positively to the podcast, and not just because of the storytelling.

“So many people wrote in and told us how much they enjoy listening to him,” says Candace Mittel Kahn, a WBEZ producer who produced six of The Trouble’s ten episodes. “He talks slow. He has a certain cadence, a rhythm in his storytelling that is unique. Every host has a voice that’s unique, and I think his really resonated with listeners. His personality comes through.”

Listening to Cason’s deep, low voice feels like sinking into a comfortable couch with a friend who’s in the middle of a great story. It’s a distinctly African-American voice. Cason grew up in Detroit, and his writing reflects how he speaks.

“One of the things that we have been focused on is trying to really amplify voices and perspectives that aren’t typically found within the public radio or even the podcast space,” says Edwards. “We’re looking to be additive where we can, to evoke a place and a perspective that is not widely represented in the other media spaces that exist.”

Edwards points to WBEZ’s geographical perspective as a major audio producer in the middle of the country. The stories in The Trouble aren’t strictly from Chicago, or even the Midwest. But you’ll hear nary a mention of Brooklyn or California. He’s also referring to hosts that stand outside the realm of “public radio voice.”

“I think there are a dearth of voices and podcasts hosted by people of color, by women, by large swaths of our communities,” says Edwards. “We want to give opportunities for more diverse perspectives and production styles to emerge.” Edwards describes the target audience of The Trouble as younger listeners and African-American listeners.

“We all know what a public radio audience is, but if we bring in hosts outside of that, they’re going to attract a different type of audience,” Mittel Kahn says. “That’s the goal, to reach as many people as possible. And I know for sure that Shannon brought in tons of people who were just Shannon fans.” In reviews on Apple Podcasts, listeners said they’d listened to Homemade Stories for years.

Released in October, The Trouble’s last episode, “Infertility,” focused on a woman’s final attempt to get pregnant. “We’ll promise to update you as soon as we know more,” Cason said at the end of the episode. But WBEZ has not yet committed to more episodes of The Trouble.

“One of the hardest things, I think a lot of producers will relate to, is among the great ideas that you could produce, which ones are you actually able to produce?” says Edwards. The four producers on the station’s on-demand audio team shift through shows.

Cason is characteristically unfazed by The Trouble’s uncertain future.

“I’m going to continue doing stories and storytelling, beyond if we’re working together, or if I’m working with someone else,” he says. “For me, Shannon Cason’s going to continue telling stories in different formats. I’m happy that WBEZ is part of that journey. My biggest thing is to have your own personal journey. These different organizations, they could be a part of it or not, but you’re going to do it anyway. Especially in this kind of environment we in now, there’s so many ways to get your creativity and art out there.”