As a fellow in a radio journalism training program at San Francisco’s KALW in 2014, David Boyer wanted to pursue a story about gentrification in a city neighborhood where change was beginning to take root. He found his story further from the city center, in a corner of the Bayview district.

A predominantly black Baptist church was losing members because black residents were being priced out of the neighborhood. A nonprofit founded by Laurene Powell, Steve Jobs’ widow, was preparing local kids for college. A KFC was doubling as a makeshift community center. And a new organic pizza restaurant had opened on a formerly abandoned lot.

After completing his piece for the Audio Academy training program, Boyer said he had the sense “that I had stumbled upon an idea that had legs, that would allow me to potentially look at gentrification through plenty of other intersections in the Bay Area.”

The result was The Intersection, a series of audio documentaries that aired on KALW and was also released as a podcast. The show explored the changing Bay Area through the people and institutions that intersect at street corners. Over two seasons, Boyer explored a misunderstood neighborhood and tech-fueled gentrification.

The Intersection is among the projects dozens of media organizations submitted to Current’s Local That Works contest, a collaboration with the Public Media Futures Forums highlighting innovative and replicable content, engagement and revenue strategies at local public media stations and nonprofit news outlets. It was one of four finalists presented at the Public Radio Super Regional Conference in Atlanta last month.

Start something that you can own

As Boyer completed KALW’s Audio Academy training, he wondered what he would do next. Roman Mars, creator and host of 99% Invisible, spoke to the fellows. Boyer asked Mars for advice on sustaining creative work.

“His advice was, start something that you can own and fundraise around and control, versus the freelance story-by-story model of paying your bills, and that stuck with me,” said Boyer, now managing editor of KALW’s newsroom.

To begin his reporting for what would become The Intersection, Boyer chose a corner in the Tenderloin neighborhood. The area rarely garners media coverage unless a shooting or drug bust occurs, yet it boasts San Francisco’s highest concentration of seniors and families, Boyer said. 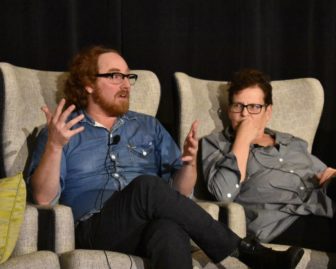 He had set out to spend a month documenting the corner, but a month turned into a year and yielded seven pieces that spanned public policy, structural inequities, addiction, trauma and education.

Season two was entirely different. Set at a corner on the campus of Google’s Silicon Valley headquarters, it explores an area that Boyer says is similarly misunderstood and caricatured.

“Once again, we sought voices that tend to be overlooked or glossed over,” Boyer wrote in his entry to Current’s Local That Works contest. “This time, we were able to expand the oversimplified ‘techies are ruining the Bay Area’ narrative by focusing on the history of the area, the role of local government and public policy, the unintended consequences of growth, as well as non-tech folks that live nearby.”

The Intersection is a simple and replicable concept. It felt big enough that Boyer could expand it to other geographical, or even metaphorical, intersections. It doesn’t have to stay in the Bay Area or even the U.S., Boyer said.

As influences, Boyer counts Studs Terkel, David Simon’s HBO series The Wire and Simon’s book that preceded it, The Corner: A Year in the Life of an Inner-City Neighborhood. Inspired by a This American Life episode that documented 24 hours at a diner in Chicago and its cast of characters, Boyer felt he was taking a similar approach by staying in one place and going deep, rather than expanding to a block or neighborhood. KUOW in Seattle also undertook a similar project in 2009 focused on a street corner in an African-American neighborhood where gentrification was underway.

The Intersection can scale to different levels of effort, Boyer said. A one-off piece connected dots between a more conservative, pre–Summer of Love San Francisco with its more progressive character today. It required a day of interviews and several hours delving into a local audio archive, according to Boyer.

But a producer who differs from people who work and live near an intersection has to work harder to gain trust, understand what’s happening and even know what to ask, Boyer said.

The idea could be adapted to a suburban or rural area, where a reporter could pick a corner based on the stories they want to tell. A story of opioid addiction can be told at rural intersections.

“You may have to leave the intersection to go to a clinic or go to a person’s job, but that intersection is still the grounding point,” Boyer said. “You don’t have to stay on that corner.”

Boyer wants to see The Intersection expand, perhaps to a national initiative that brings together stories and creates curated shows, but says it’s critical that other adopters understand the vision and intent of his project.

“My fear is that stations on their own create their own Intersections, and we miss that opportunity to connect them,” Boyer said.

The Intersection’s funders include California Humanities, which provided $30,000, and the San Francisco Arts Commission, which contributed $8,000. Boyer found funding largely on his own. He’s now seeking more grants to sustain The Intersection and is working with Audio Academy fellows, who will pursue their own intersections.