The future of a statewide journalism collaboration among Arkansas public radio stations is uncertain after the end of initial funding for the project.

Arkansas Public Media began in 2015 as a reporting collaborative among four Arkansas-based stations, supported by a $278,300 grant from CPB as part of its Regional Journalism Collaboration grant program. The funds supported the hiring of a managing editor, a “partner manager” and two reporters, with stations providing in-kind support in the form of staff time and other resources.

CPB extended the terms of the two-year grant into a third year but declined to renew funding for the collaboration this year. Lead station KUAR in Little Rock announced in September that it could not make up the difference in funding with the end of CPB’s support. The station said it would cut all full-time staff whose salaries were paid with the CPB funds.

“Nobody was surprised when the money ran out,” said Bobby Ampezzan, former managing editor of APM. “I certainly operated on the notion that I probably wouldn’t have a job after the grant ran out.” KUAR had hired Ampezzan from the Arkansas Democrat-Gazette in Little Rock. His job ended along with CPB’s support, and he now works for a PR firm. 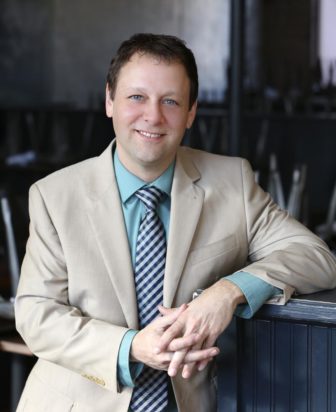 Seven other RJCs that launched in 2015 with CPB support continue to operate, with participating stations absorbing costs into their regular budgeting. At least one RJC, Ohio Valley ReSource, received additional CPB support after its initial grant.

Kathy Merritt, CPB SVP for journalism and radio, didn’t point to any specific reasons for the funder’s decision not to extend funding for Arkansas Public Media. “We made an assessment of just how this fit into CPB’s priorities and mission at the time the grant expired, and there’s no one single factor that goes into how we determine to continue a grant or not,” she said.

‘You keep washing back to shore’

APM suffered an early setback when KUAR GM Ben Fry, the architect of the application for the CPB grant, died of a heart attack in 2016. He had interviewed Ampezzan for the new position the day before he died. KUAR interim GM Nathan Vandiver took over the project and assembled the team.

“There was quite a loss of institutional knowledge at that point,” Vandiver said.

“When Ben Fry died, I think there was a period where the station had to obviously reorganize a little bit because new leadership came into play,” Merritt said. “If anything, it gave them a little bit of a delayed start.”

Launched with the name Natural State News, APM began with education, energy and health as coverage initiatives and added justice and agriculture over the two years of its operations. Partner stations were KUAR, KASU, KUAF in Fayetteville and KTXK in Texarkana, and APM also counted as “community partners” the statewide public TV network Arkansas Educational Television Network and El Latino Arkansas, a Spanish-language newspaper in Little Rock.

Staffers estimated APM was able to raise around $50,000 through donors and underwriting, not enough to make up for the end of CPB’s seed money.

“It’s like the movie Cast Away, where he builds the sailboat and then realizes that actually, you have to get it out past a certain place,” Ampezzan said. “Otherwise, you just keep washing back to shore.”

In 2017, KUAR held a dedicated “APM Day” during its fund drive, pitching it to donors as a chance to fund statewide reporting that would augment local coverage. Vanessa McKuin, APM’s former partner manager, estimated that two-thirds of the day’s donors were KUAR members who were giving the new initiative extra support.

“My sense was there were people who were supporting the project just because they were supporting statewide reporting, but there were also a significant number of people who supported the stations and who really saw the value in KUAR’s involvement in [APM],” said McKuin, who became KUAR’s development director earlier this year.

RJCs that have survived beyond CPB funding share some common characteristics. For one, they “made the decision along the way to incorporate the cost of their collaboration into their operating budgets,” said CPB’s Merritt. Rather than seek additional grants, she said, “they decided that this way of working together is so important to their ability to serve their audiences … that they’re going to introduce those costs into their annual budget and then find a way to pay for those costs.”

In Indiana, for example, partner stations in an RJC picked up the funding slack in the project’s third year and secured outside funding related to specific coverage areas, according to Perry Metz, GM of lead station WFIU/WTIU in Bloomington.

Ohio Valley ReSource continues with seven partner stations and a dedicated staff of eight, including a data reporter. At the Public Radio Super-Regional Meeting in October, Merritt spotlighted ReSource’s data-driven reporting project on needle-exchange programs throughout the Ohio Valley.

“We’re good for now, but beyond the next two-year horizon is what we’re focused on right now,” said Jeff Young, ReSource’s managing editor based at lead station WFPL in Louisville, about the collaboration’s sustainability. “We haven’t completely made it over that hump.”

CPB renewed funding for ReSource with an additional $322,000 after its initial two-year, $445,500 commitment. To make up the difference, several of ReSource’s partner stations agreed to pay their reporters’ salaries. Stations ask donors to support ReSource amid their other fundraising messages.

“There is a national responsibility to treat journalism as a public good, a public service.” — Jeff Young, Ohio Valley ReSource managing editor

According to Young, ReSource has also benefited from working with stations that have previously experimented with collaborative models, such as West Virginia Public Broadcasting. The Kentucky Center for Investigative Reporting, based at WFPL, has provided ReSource with deep-dive investigations.

Young has his fundraising sights set higher: wooing national donors. The local donor base is too small to support endeavors like ReSource, he says, and organizations that typically fund news projects on the coasts should also fund groups like his.

“You can’t expect every community in every underserved part of the country to come up with the money right away, after we’ve had decades of those communities being drained of their people and their resources and their talent,” he said. “There is a national responsibility to treat journalism as a public good, a public service.”

Merritt also pointed to Harvest Public Media, one of the first collaborations funded by CPB, as an example of a successful effort. “They had a vision of where they wanted to go, a shared vision,” she said. After CPB’s initial grant, Harvest’s six full partner stations and more than a dozen additional partners funded the initiative. “We have not funded them in years, but Harvest Public Media still exists,” Merritt said.

Strong editors are among the most crucial components of successful journalism collaborations, Merritt said, adding that the job should be thought of as managerial rather than simply editorial.

APM did achieve a goal that Merritt says helps collaborations: contributing reporting to NPR’s newsmagazines. In 2017, NPR featured its reporting on the state’s rash of death-row executions on Morning Edition.

The KUAR team says it’s committed to continuing statewide reporting in some form. APM has submitted around $160,000 in proposals to foundations for funding freelance reporting or to create a position, which KUAR execs said they should hear back on by the end of the year.

“We had to be very thoughtful about what we could afford in terms of keeping people on right now,” Vandiver said. “It’s moving forward in a different way than it was operating before, but it is not dead.”