With a $750,000 grant from CPB, Washington, D.C.’s NPR station will take its daily weekday show 1A to stations as “1A Across America.”

The two-year collaborative initiative, unveiled Thursday by WAMU and CPB, establishes an editorial partnership among WAMU and six public media stations across the country. 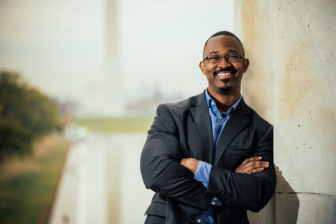 1A is a two-hour weekday talk show hosted by Joshua Johnson that features topics spinning off from the news of the day. Working closely with the Washington-based production team, the stations will source stories, conduct live broadcasts and events, produce collaborative content and highlight original, local journalism in the run up to the 2020 presidential elections, according to announcements of the grant-funded project.

“With our support, ‘1A Across America’ will bring more local views on issues of importance into a national conversation that is informed by local journalism,” Kathy Merritt, CPB’s SVP of journalism and radio, said in a statement.

The participating stations include Houston Public Media News 88.7; KMUW in Wichita, Kansas; KUNC in Greeley, Colo.; Michigan Radio, based in Ann Arbor; MPR News in St. Paul, Minn.; and WBHM in Birmingham, Ala.

“Birmingham is a blue city in a red state. Those strains reflect the larger divide in America, as the partisan political gulf seems to be ever-widening and constructive conversations on so many important issues can be difficult,” said WBHM GM Chuck Holmes in a statement. “Our staff seeks out those stories to provide context for our listeners. We look forward to joining the collaboration with 1A to tell those important stories to a wider audience.”

1A launched into national distribution in January 2017 after longtime NPR talk show host Diane Rehm retired from her weekday broadcast. As a successor to The Diane Rehm Show, 1A quickly exceeded expectations for station carriage. Since its debut, 1A has grown more than 90 percent in station carriage and expanded its audience to 3.63 million listeners nationwide. 1A reaches listeners nationwide via broadcasts on 335 NPR stations, according to CPB.