Several public radio newsrooms are putting data behind evaluations of whether diversity in their sourcing — or a lack of it — perpetuates stereotypes or presents truthful journalism.

KUT in Austin, Texas, along with Philadelphia’s WHYY, Seattle’s KUOW and San Francisco’s KQED, are all engaged in efforts to gather and analyze data on their sourcing in news reports or show segments. The work involves logging the race, gender and role of the interviewees and the stories they appear in.

Some stations plan to follow NPR’s lead by publishing their findings to their websites; others are talking about them at industry conferences.

“I think you see a lot more transparency emerging in the system,” said Doug Mitchell, a public media consultant and project director with NPR. “I’m hoping that with NPR, KUOW and others, this is the beginning of a groundswell of transparency to addressing a deep problem.”

“I’m hoping that with NPR, KUOW and others, this is the beginning of a groundswell of transparency to addressing a deep problem.” — Doug Mitchell, NPR project director

Newsroom leaders at NPR and stations say that the work of developing diverse sources creates better journalism, and also makes business sense. Research has shown that people of color don’t often feel their stories are reflected on public radio, as WHYY recently ascertained in in-depth interviews with Greater Philadelphia residents. A study released by NPR in 2010 found that news consumers from some demographic groups felt excluded from public radio programming, reporting that these perceptions were a barrier to audience growth. System leaders have long been aware that NPR and stations must do better jobs of reflecting and connecting with more people in their communities if they are to attract new listeners.

Collecting data helps to measure progress, invest resources and guide discussions. “Being clear about data, and trying to gather as much data as you can about your own coverage, is the first step to being able to repair and think about how to change,” said Amy Kovac-Ashley, director of newsroom learning at the American Press Institute.

For several years NPR has released figures on the makeup of its staff and the diversity of its sourcing in on-air coverage. Its latest studies, which include an analysis of sourcing in online coverage, found that staff and sourcing remain persistently white.

Modeling its sourcing survey on NPR’s, KUT has begun reviewing the sources and voices heard in its reporting, including race, ethnicity, gender, geography, profession and story type, said Hawk Mendenhall, KUT associate GM, director of broadcast and content. The station hired a part-time staffer to catalog its sourcing for the first quarter of 2018 and set up a system for staffers to log that data on an ongoing basis. The first-quarter research has been completed and is to be discussed with staff next week. Afterwards, KUT will release its findings publicly.

Eventually Mendenhall wants to replicate the cataloguing of content produced for the Texas Standard, the daily newsmagazine that pulls coverage from partner news organizations across the state.

For KUT and WHYY, the sourcing survey is just one of several efforts to change the culture of their newsrooms. In May, KUT newsroom leadership met with a diversity and inclusion specialist from the University of Texas who led a presentation on unconscious bias. Kovac-Ashley, who also first met with KUT newsroom leadership in May, will visit the station this month for in-depth discussions around goal-setting, mission and considering ways to support diversity and culture change.

Efforts to diversify sourcing also call for a closer look at staff diversity, according to newsroom leaders. WHYY is in the midst of a broad effort to diversify its audience, membership and staff, which is 7 percent black, whereas the city of Philadelphia is 43 percent black. 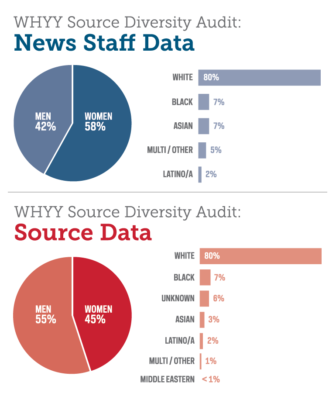 After consulting outside experts, WHYY audited all voices heard on local broadcasts of Morning Edition, NewsWorks Tonight, Radio Times and The Pulse by randomly selecting weeks of programs produced over three months. Coders noted the race, gender, role and theme of the source in each story or segment. A media researcher at the University of Southern California analyzed the data and found that 80 percent of sources were white, 7 percent black, and 2 percent Latino — the same percentage those groups are represented on WHYY’s news staff.

Every time WHYY uses a source in its news coverage it is giving the person a certain place in a story, said Sandra Clark, VP of news and civic dialogue, during a panel at the Public Media Development and Marketing Conference last month in Chicago. NPR uses tons of experts, Clark continued. WHYY similarly often goes to academics and government employees. “How much do we really get down to the level of how it impacts people, stories impact people, as opposed to who the expert is in the story?” Clark asked.

In March, Seattle’s KUOW revived source tracking in its features, two-way interviews and web content, said News Director Jill Jackson. The data-gathering excludes daily spot news coverage. Reporters enter data on their stories by the end of each month, a task that takes some haranguing. Reporters’ schedules are stretched, even if they share the goal of increasing source diversity, Jackson said. 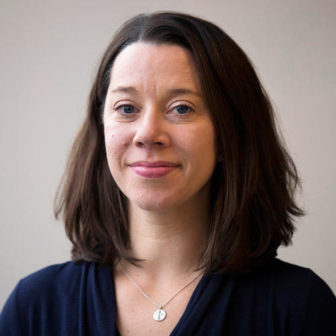 KUOW reporters were uncomfortable with a similar effort two years ago because the analysis tracked names, profession and addresses— thereby putting individuals’ information at risk, Jackson said. This new approach tracks whether the story is primarily about race and gender; sources’ city, state and county; gender and race by the reporter’s best educated guess; age range; and why the reporter talked to them. For example, the source could be directly affected by the news at the center of the story, a witness to what happened or an expert.

The newsroom started out exceeding its goals: In March its sourcing hit 52 percent women or non-binary gender and 30.6 percent people of color. Over the next two months, sourcing in both categories declined. The percent of women or non-binary gender hit 47 percent in May. Sources who are people of color declined to 20.6 percent in April and increased slightly, to 23 percent, in May.

“Basically our feeling is we could take two approaches at our station,” Jackson said. “We could listen to our air and perceive that we’re hearing more diverse voices, or we can actually count and measure and confirm whether we’re actually increasing the diversity of our sources.”

This month KUOW increased its goal for diverse sources from 25 to 30 percent nonwhite sources, which would reflect the demographics of Seattle, Jackson said. 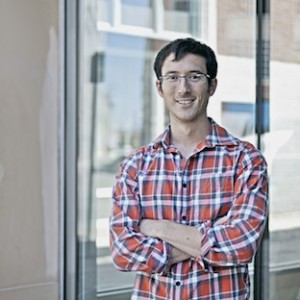 The Bay, a podcast from KQED that launched in February, is tracking the gender and race of its main guest, usually a reporter, as well as the location and topical categories of coverage, reporter and host Devin Katayama said in an email. The Bay is still formalizing its process and has not yet decided what to do with the information. WHYY and KUOW have shared their findings at industry conferences.