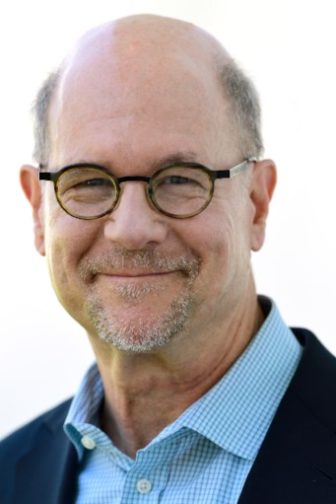 Early in his career Simon was part of the executive team that moved NBC from third place to first among TV networks in the 1980s. NBC’s “Must See TV” schedule of popular and critically acclaimed programs at that time included Seinfeld, Frasier, The Cosby Show, Cheers, Golden Girls and Law & Order.

Simon moved on to serve as president of Viacom Productions for a decade and general manager of BBC America from 2005 to 2010. There, he commissioned the network’s first original programming, including Orphan Black, and U.S.-U.K. productions Luther, The Hour and Broadchurch. After that, he became managing director at Vulcan Productions, the media firm founded by Microsoft co-founder Paul Allen.

Asked to compare the strengths of the two program executives, Kerger noted that Hoppe came from within public broadcasting. “Perry is a media executive with a broader background of experience, having worked in digital, as well as in network, and then at both Vulcan and BBC,” she said.

“Every person that comes into this brings their own expertise,” Kerger said.“Beth’s expertise was in science and natural history programming. And Perry’s background is more deeply steeped in scripted work. And so I think we’ll see what he will bring to the mix.”

With Simon’s hiring, PBS is poised to “look across this country and see the great art that’s being created, and help us not only discover that art, but help us also see the creativity that exists in all of us,” Kerger said.

The PBS president said she hopes that any new executive will approach the job of leading PBS’s program division from a new perspective. As such, she expects Simon “will look at our work with fresh eyes … and help us find out how to make those things work even better. That’s what we sense when we talk to him.“

Simon serves on the board of directors of the Oregon Shakespeare Festival in Ashland. Kerger cited his long tenure with the regional theater as evidence of his “deep interest in the performing arts and theater, really nonprofit theater. To me, that also really resonated,” she said.

Kerger, who has worked to build a bigger footprint for arts programming on PBS throughout her presidency, said Simon’s involvement in regional arts is a key strength that he brings to the job.

With Jane Chu, former chair of the National Endowment for the Arts also joining PBS in the new position of arts adviser, Simon’s appointment opens a new opportunity to expand and improve on its arts programming, Kerger said. 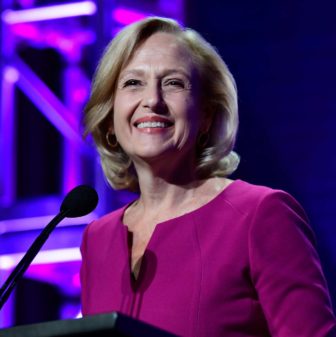 With the hiring, PBS is now poised to “do what I think no other media organization has been able to do, which is to really look across this country and see the great art that’s being created, and help us not only discover that art, but help us also see the creativity that exists in all of us,” Kerger said. “And that’s really my aspiration for where I think public broadcasting needs to be in the art space.”

Simon was introduced to critics at the session but offered no remarks. Kerger said he will relocate from Los Angeles and start the job in late September, at which time he will be available for interviews.

In an announcement sent to station managers prior to the TCA session, Kerger said PBS worked with the executive recruiting firm Russell Reynolds and Associates to assemble an impressive slate of candidates with diverse experiences and backgrounds.

“We talked to Perry fairly early in the process,” Kerger wrote in the email. “We looked at people from within our public media community and within a wider world. We looked for someone who had vision and creativity and leadership, who demonstrated collaboration, who understood the changing media environment that sits in front of us.”

Simon understands the value and mission of PBS, she added. “I think there are a lot of people that are extraordinary, talented media executives, but for someone to work well at PBS, you have to truly believe in the possibilities of what we do, and we saw that in Perry.”

PBS also confirmed that “Won’t You Be My Neighbor,” a documentary about the life of Fred Rogers, will be broadcast on Independent Lens early next year. The telecast will mark the 50th anniversary of the premiere of Mister Rogers’ Neighborhood.