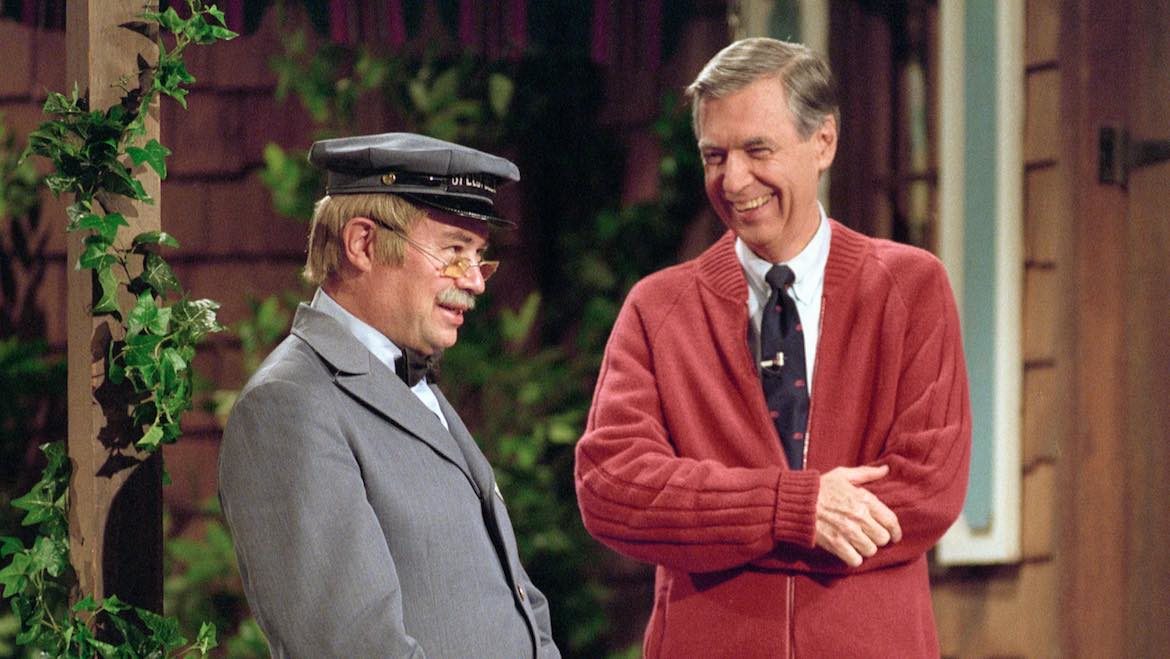 When Morgan Neville, an Oscar-winning documentary filmmaker, decided to turn his lens on Fred Rogers and his Neighborhood of Make-Believe, he pitched a specific idea to the family of the beloved children’s entertainer.

“I said, ‘I’m not here to make a film about Fred’s life from beginning to end as much as I want to make a film about the things he stood for,’” Neville recalled. That approach proved to be the right one to win approval from Rogers’ family and estate. Rogers’ widow later told Neville, “Fred always thought that if anybody was going to tell his life story it would be the most boring story ever, so he never wanted it done.”

The story Neville tells in Won’t You Be My Neighbor? — a documentary that premiered to critical acclaim at this year’s Sundance Film Festival and goes into national theatrical release June 8 — is anything but boring. The title comes from the song that opened each of the 895 episodes of Mister Rogers’ Neighborhood that aired on public television, and it reflects the philosophy of compassion and kindness that was central to Fred Rogers’ life and work.

“You hear in the film one of Fred’s great frustrations was that people didn’t appreciate the depth of the show,” Neville said. Part of what the film accomplishes “is hopefully a major re-evaluation of just how profound Mister Rogers’ Neighborhood was and the profundity of his vision.”

This year marks the 50th anniversary of when Mister Rogers’ Neighborhood moved from a regional program for children to one with a nationwide audience. Considerable attention is being paid to its host and creator. So far this year the U.S. Postal Service issued a stamp in Rogers’ honor and PBS aired an anniversary special. An extensive biography, titled The Good Neighbor: The Life and Work of Fred Rogers, is due out Sept. 4. Tom Hanks has signed on to portray Rogers in a biographical movie called You Are My Friend, directed by Marielle Heller. Filming begins this fall; no release date has been announced.

And in early 2019, PBS’s Independent Lens will present the national broadcast premiere of Won’t You Be My Neighbor? PBS Programming VP Bill Gardiner announced the debut and presented a sizzle reel during an April 5 luncheon at PBS TechCon. A PBS spokesperson later said the film’s Independent Lens premiere is not yet final.

“What I was interested in — really from the get-go — was to make a film about Mr. Rogers’ ideas.”

When Rogers died in 2003 at age 74, he had received countless awards and accolades, including the Presidential Medal of Freedom, induction into the Television Hall of Fame and a Lifetime Achievement Award from the Daytime Emmys. His legacy isn’t about red carpet; it is concerned with nurturing the emotional lives of generations of young children.

Rogers’ career as a television performer began off-camera, bringing to life such now-familiar puppets as King Friday XIII and Daniel Striped Tiger, created for The Children’s Corner, a show aired by Pittsburgh’s WQED from 1953–61. He finally took center stage on MisteRogers, a CBC show for children that launched in 1961. Rogers returned to WQED in 1966 to produce Mister Rogers Neighborhood. The show was distributed to other public TV stations through the Eastern Educational Network and eventually became a signature children’s program of PBS. Production of new episodes continued until 2001.

In the history of television, no host of a children’s programs proved to be so industrious. Rogers served as performer, writer, songwriter, singer, puppeteer.

Mister Rogers’ Neighborhood arrived as the Vietnam War raged, and antiwar protests and civil unrest roiled the nation. In fact, the first episodes dealt with King Friday XIII bringing in border guards, erecting a fence around the Neighborhood and fighting against change. “We were making that program in very tumultuous times,” said David Newell, who appeared in every episode as deliveryman Mr. McFeely. “When you think about it, it’s just like now.” Newell said he wonders if watching “this very peaceful program” brought comfort to children then. “We need Mister Rogers now more than ever.” 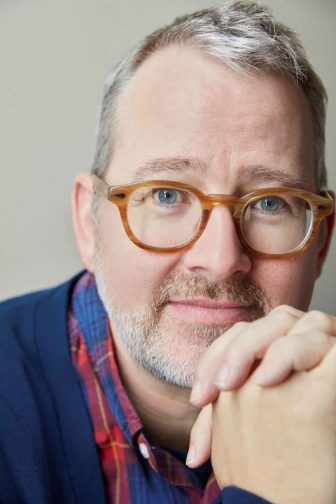 Neville followed his pledge to avoid the cradle-to-grave approach of most biographical documentaries. “What I’m trying to do is make a film, not make a Wikipedia page,” he said. “By merely summarizing a person’s life, it doesn’t make for a good film necessarily. What I was interested in — really from the get-go — was to make a film about Mister Rogers’ ideas.”

A pioneer in educational television as well as an ordained minister, Rogers cared deeply about the social and emotional development of children. He did his best to assure them that it was OK to feel mad, sad or any other emotion. Rogers directly addressed concerns children might have and espoused the idea of treating everyone with kindness.

“Kids are not clueless in the way we adults think they might be,” said Neville, who was born in 1967 and considers himself a “first-generation Mister Rogers fan.” “Kids pick up on all kinds of things happening in the culture.”

Rogers’ idea, which was unique for the times, was to speak honestly to children to help them process what was bothering them. After taping his last program, Rogers returned to the studio after the 9/11 terrorist attacks to make a public service announcement reassuring children. “Up until this day, it’s hard to imagine somebody else talking to 3-year-olds about terrorism or assassination,” Neville said.

Won’t You Be My Neighbor? uses interviews, archival footage and animation to unspool its story and offer insights into why Rogers was so empathetic and so imaginative. A chubby child, he was tormented and teased by his peers, who called him “Fat Freddy.” A sickly child who fell ill with “every imaginable childhood disease — even scarlet fever,” as Rogers says in the film, he spent his time in quarantine making up games to play.

“Fred always said the outer child may change but the inner child doesn’t,” said Newell, who is beginning work on a book about the program.

“As a parent myself now, I know there’s just a much deeper appreciation and understanding of kids — their feelings and developmental stages — than when I was a child,” said Neville, winner of the 2014 Academy Award for best documentary feature for 20 Feet From Stardom, about the world of backup singers. “Fred was part of that whole movement and a major advocate for that, and that’s something he doesn’t get a lot of credit for.”

While it may feel as though Mister Rogers Neighborhood “is sadly anachronistic” today, Neville said, his goal in making the film was to bring Fred Rogers’ voice back into the public consciousness. For years Neville had felt that too many people in the public sphere have been operating out of their own self-interests and not for the long-term good of the community, he said. Neville sought to address this as he got deeper into the research for Won’t You Be My Neighbor?

“When I started thinking about making this film and … listening to him — and not just the show, but listening to speeches and reading things he wrote — I felt like this is what I’m missing. This is the voice I want to hear today, so let’s at least have a discussion about it. My biggest hope for the film is just for us to have a discussion about … how we should be good neighbors.” 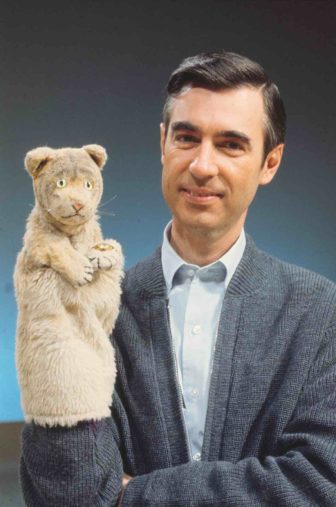 After immersing himself in the world of Mister Rogers’ Neighborhood, Neville said he was left with “the responsibility to be the best version of myself that I can be. The responsibility’s incumbent upon all of us to be good neighbors. That’s what I want the film to do, to have all of us think about our shared responsibility.”

“There was never anyone like Mister Rogers before him, and there will never again be another Mister Rogers,” said Tim Lybarger, who runs a website about the program. “Despite being the butt of many jokes in pop culture, I think deep down every person wants to practice and receive the love, patience and kindness shown by Fred Rogers.”

Won’t You Be My Neighbor? proves to be as warm and gentle as Rogers himself; as those interviewed for the film attest, he was the same person off-camera as he was on. “The job was in no way just the show,” Neville said. “The job was every part of his relationship with every person he met. That’s daunting to think about.”

“This documentary really establishes what a serious person he was and how strong his values were,” said Maxwell King, president of the Pittsburgh Foundation and the author of the forthcoming biography. “I really appreciated that very much as someone who also thinks Fred Rogers was a very, very serious and important figure.”

With so much attention being paid to Rogers this year, the question must be asked: What would this quiet man have thought about his life being in the spotlight? King, who is also a senior fellow at the Fred Rogers Center for Early Learning and Children’s Media, spent seven years writing the biography. He believes Rogers would not have embraced it. “I think Fred’s humility, which was genuine, would have caused him to be a bit chagrined by all this attention,” he said. “But I think he would be very happy to see the underlying values that motivated him appreciated and championed.”

“In some way he would be pleased because I think it would be a tribute to his mission, that he started out to create the best television he could for young children,” Newell said. “That seems to be the tenor of the documentary, the direction. They’re really celebrating Fred’s accomplishments, and also showing that he was the real thing. It wasn’t just a job. It was his mission. I think that would please him. On the other hand, he was very self-effacing.”

Editor’s note: This article been updated with PBS’s clarification that plans for the film’s Independent Lens premiere are not yet finalized.