Henry Morgenthau III, a producer and documentarian for public television in its earliest days, died Wednesday in Washington, D.C., of complications from aortic stenosis. He was 101.

His son, cinematographer Kramer Morgenthau, said in a Washington Post obituary that his father was inspired by “the whole concept of using television to educate and also tell stories of marginalized people in society.” 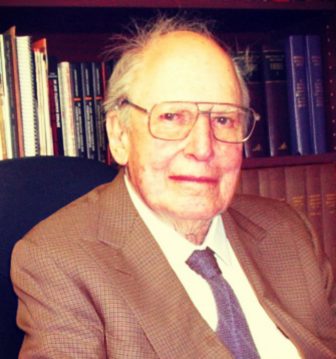 Henry Morgenthau joined WGBH in Boston in 1957, just two years after it went on the air. He worked there as a producer until 1977. Morgenthau’s work at WGBH won national honors including Peabody, Emmy and UPI awards. He was recognized during a celebration of 50 years of public broadcasting in November at the Library of Congress.

Among his signature programs was South African Essay, a miniseries about apartheid. Another of his projects, Eleanor Roosevelt: Prospects of Mankind, was a weekly talk show hosted by the former first lady that aired from 1959–62. Filmed at Brandeis University, the roundtable discussion featured guests including John Kenneth Galbraith, John F. Kennedy, Henry Kissinger, Edward R. Murrow, Bertrand Russell and Adlai Stevenson

In 1963 Morgenthau interviewed the Rev. Martin Luther King Jr., Malcolm X and James Baldwin for The Negro and the American Promise. Portions of the Baldwin interview aired in the 2016 Independent Lens documentary I Am Not Your Negro, which received an Academy Award nomination.

In 1967 he produced A Conversation with Svetlana Alliluyeva, a documentary about Joseph Stalin’s daughter, for NET Journal, a public TV news and public affairs anthology series.

Henry Becton, WGBH vice chair and former station president, was a producer trainee under Morgenthau. Becton recalled Morgenthau as a “beloved mentor to many of us,” with a refreshingly understated and selfless style, according to a statement from the station.

“Our audience benefitted time after time from Henry’s genuine and far-ranging intellectual curiosity, from his social conscience, often ahead of his time, and from his access to the best minds and leaders in numerous fields,” said Becton, who worked with Morgenthau on a national special about parenting hosted by pediatrician Dr. T. Barry Brazelton.

Morgenthau was born Jan. 11, 1917, in New York City, son of Elinor Fatman and Henry Morgenthau Jr. He attended Princeton University, graduating with an art history degree in 1939. Morgenthau served in the Army during World War II and received a Bronze Star. He married Ruth Schachter in 1962; she died in 2006.

He authored two books: the family history Mostly Morgenthaus in 1991 and a book of poetry published when he was 99 years old, A Sunday in Purgatory. “Later in life Henry’s creativity found a new chapter as a poet, continuing to inspire us to the end,” Becton said.

Survivors in addition to Kramer include a daughter, Sarah Morgenthau of Washington; a son, Henry “Ben” Morgenthau IV of Danville, Calif.; a brother, Robert M. Morgenthau; and six grandchildren.

He was preceded in death by a sister, Joan Morgenthau Hirschhorn.

Services took place Monday in Washington; interment will be in New York City. In lieu of flowers, contributions may be made to The Henry Morgenthau Poetry Prize, c/o Passager Books, 1420 N. Charles St., Baltimore, MD 21201; or to Princeton University, 330 Alexander St., Princeton, NJ 08540.