Black Public Media will administer the program, which honors its former executive director who died in January at age 52.

CPB provided $300,000 to start the fund and unveiled it Tuesday during a luncheon at the PBS Annual Meeting. Jones’ husband Grant Clark and daughter Ayana traveled from South Africa for the announcement.

CPB President Pat Harrison presented Ayana with a medal that will be given to all the scholarship recipients.

Clark called the moment “bittersweet, but heavy on the sweet.” He said that public media was “far more than just a job” to Jones. The pair met and fell in love at the 2001 INPUT international public television conference in South Africa, he said.

“Jacquie’s mission was to bring masses of excluded people into the public square, as she called public media,” Clark said.

With the scholarship fund, “her voice echoes on in us. Jacquie was a bright, shining light. And we will do all we can to reflect her light in the places she beamed it into the world.” 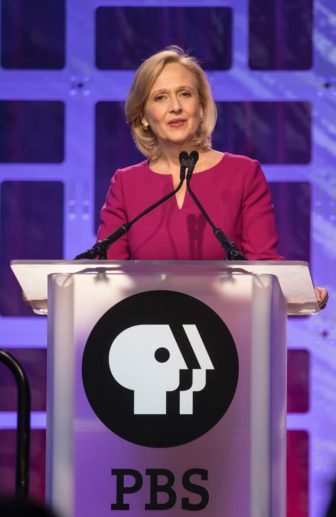 During a keynote address earlier in the day, PBS President Paula Kerger said that Jones “reminded us that public media is strongest when our voices reflect the great diversity of our country, and she was tireless in mentoring the next generation of storytellers.”

Kerger opened the conference ­– which she called “our system’s pep rally, up-fronts, and rave all rolled into one” — on optimistic notes. She cited several accomplishments over the past year. Public television maintained its near-universal broadcast coverage and provided the PBS Kids 24/7 channel to more than 95 percent of U.S. TV households and to “every device with Internet access.” Public broadcasters also rallied to assist colleagues at stations that were knocked off the air after natural disasters in Puerto Rico and the Virgin Islands.

“As we plan for the future,” Kerger said, “we do so from a position of strength, with strong collaboration, tremendous momentum and the wind at our backs.”

In other news, PBS announced that Christiane Amanpour will permanently replace Charlie Rose in a new late-night talk show premiering in July.

The hour-long Amanpour & Co. will feature will feature  an expanded roster of contributors, including  journalists Walter Isaacson, NPR’s Michel Martin, Alicia Mendendez and PBS NewsHour’s Hari Sreenivasan. PBS and WNET will produce the series in collaboration with CNN. The new series will continue to air on CNN International weekdays.

The PBS Annual Meeting, the largest ever with nearly 1,200 attendees, continues through Wednesday.