Stewart Vanderwilt will be the new president of Colorado Public Radio, the station announced Friday.

Vanderwilt has worked as GM of KUT in Austin, Texas, for 18 years. At CPR he succeeds Max Wycisk, who will retire June 30. Wysick has led the station since 1978. 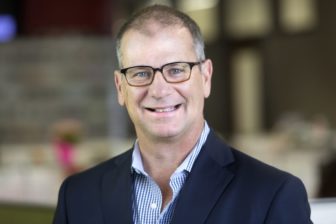 “Stewart is the right fit for CPR and will be a great addition to the Colorado media scene,” said Dean Salter, chair of CPR’s board, in a press release. “His extensive experience and demonstrated ability to manage and grow a large public radio organization will serve us well.”

At KUT, Vanderwilt helped to develop the weekday news program Texas Standard in collaboration with other Texas public radio stations in 2015. He also assisted with the opening of KUT’s first newsroom in 2002.

In 2012 he directed the opening of a new broadcast center after a successful $9.8 million capital campaign. Prior to joining KUT, he worked for 15 years at Indiana Public Radio in Bloomington, Ind., in roles including GM.

He currently serves on the board of PRI and was previously on the boards of Greater Public and the Station Resource Group.

“Colorado Public Radio is already a leader in the public radio industry and across Colorado, as evidenced by its statewide reach, strong membership base and dedicated staff,” Vanderwilt said in the release. “I’m honored to have the opportunity to contribute my expertise in content creation, management and fundraising to help CPR further its mission and become an even more vital resource to the Colorado community.”