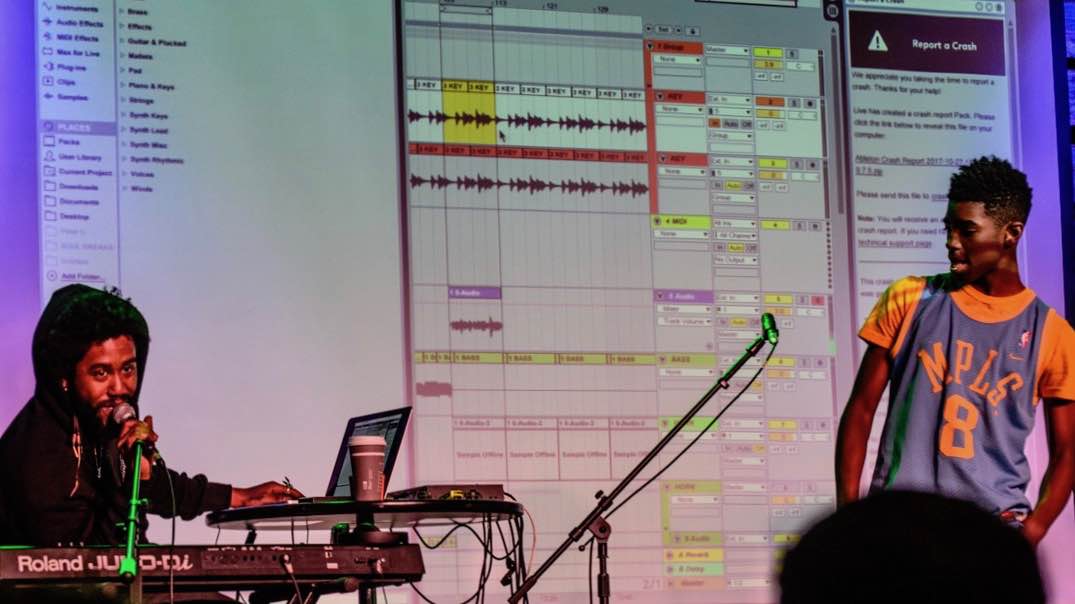 MILWAUKEE — “Push those chairs back, this ain’t no opera house,” Tyrone Miller hollers over a crowd of restless high-school musicians.

After a hundred plastic chairs are dragged against polished concrete, and as performers frantically finalize musical arrangements, I found myself in the back of the room with Trevon Lampkin, a recent graduate of Milwaukee Marshall High School. Like me, Lampkin is new here. Unlike me, he’s about to perform on stage for the first time. He told me that when he entered the room, he asked himself, “Do I really belong here?”

Lampkin and I are at The Music Lab, a monthly event held in 88Nine Radio Milwaukee’s public performance space. Budding musicians join a rotating cast of musicians, producers and music industry professionals for a Friday-night event that’s part master class, part open mic and part clubhouse for teens across the city.

After half a dozen students rapped, strummed and sang, Lampkin made his way to the stage. When the beat kicked in, he started rapping, nervous and stoic until the crowd cheered him on. As the audience sang back to him the song’s chorus — “I can’t wipe these woes away” — he stood a bit straighter, his voice grew stronger and he danced across the stage.

Watching him, I was proud of how he came out of his shell, but not nearly as proud as his beaming mom, who recorded his performance from the front row. As Lampkin bounced before the cheering crowd in front of 88Nine’s glowing logo, I couldn’t remember the last time I saw so many excited young people at a public radio station.

Somehow, The Music Lab has cracked public media’s greatest challenge: how to be hip.

‘What more important service can we provide?’

The core of The Music Lab’s coolness is its talent. Though housed at 88Nine, it’s the brainchild of Grace Weber, a Grammy Award–winning singer/songwriter and Milwaukee native, and Binta Niambi Brown, Weber’s manager. While cutting a record across town in the winter of 2016, the pair visited the station’s coffee shop near-daily to get work done. “The WiFi is good,” Brown told me. 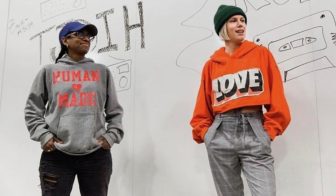 In the aftermath of a couple of high-profile confrontations between police and local black communities, the pair wondered how Milwaukee’s siloed populations could meet and connect. “Why not here?” they wondered. They approached 88Nine Executive Director Glenn Kleiman.

The idea resonated with the mission and values of 88Nine, making it a “no-brainer,” Kleiman said.

“It gives students a stronger sense of self-worth,” he said. “What more important service can we provide?”

In a way, The Music Lab extends 88Nine’s existing community engagement events. The 11-year old Triple A music station was recognized as a finalist in Current’s Local That Works contest for The Lab and other wide-ranging local-first initiatives, including free concerts by local artists in its performance space every Thursday and the Radio Milwaukee Music Awards, which gives listeners the chance to vote online and attend an awards ceremony with live performances.

But The Music Lab is a different kind of project for both 88Nine and public media as a whole. Several public radio stations do offer youth programming in the form of audio production training, such as KUOW’s RadioActive and New England Public Radio’s Media Lab. And WUOL in Louisville, Ky., offers music education programs that also made the station a finalist in Current’s Local That Works contest. But The Music Lab is the only youth program I know of that is run primarily by an outside party.

88Nine provides the performance space, manages community outreach for the events and provides financial services for the Lab but doesn’t profit from the program. Weber and Brown manage the rest of the programming, curate the open-mic portion and book talent. The Music Lab is its own organization with an advisory board that includes an 88Nine representative and is seeking 501(c)(3) status. So while 88Nine is involved, Weber and Brown have virtual autonomy in building the program.

Kleiman told me that the station would usually run such a program, but the Lab partnership is an “uncommon structure.” Stations that pursue such partnerships should “clearly define the roles of your partner and the station,” he said. Some may not want to give up so much creative control, but those that do can bring in new audiences and gain access to previously unknown talent. 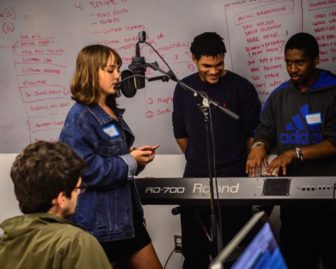 Students record and mix a sample during a breakout sessions with a local producer at The Music Lab in October 2017.

A year after its debut, The Music Lab welcomes up to 100 students each month. Special guests have included New York University professor and DJ Jason King and renowned Nuyorican poet Aja Monet. Guests both hold a master class and give feedback to students after their open-mic performances, providing unique opportunities for young people.

At the October Lab, for instance, Chicago hip-hop trio The Social Experiment created samples and taught hands-on music production. Alongside local producers and with donated equipment from Guitar Center, each producer worked with a small group of students on sampling instruments and producing original beats on the spot.

The Music Lab provides what Milwaukee schools, with their limited arts budgets, rarely can, Weber says. “Especially for the students who are not in the musicals or not in jazz band or not in choir,” she told me after a long line of students hugged her goodnight, “teachers appreciate that there’s somewhere they can learn about the industry side of music and also the craft.”

Enzo Demichele, a senior at Marquette High School, echoed that sentiment. “At school I don’t get to interact with musically minded people,” he said. “But we’re lucky to have the Lab. It gives me a different sense of what to do with music.”

While The Music Lab isn’t Milwaukee’s only youth-centered music space, its mission is unique. “A lot of community organizations are based within communities and within neighborhoods, so they’re pulling from residents that live around those organizations,” said 88Nine Event Coordinator Maddy Riordan, whose responsibilities include outreach and event support for The Music Lab. “What Grace is doing is reaching out to a broader audience.”

In that way, the Lab is also a common ground and a neutral space for young people. “We have a really segregated city,” said Kleiman, “and one of the roles for Grace and Binta is to be that bridge, using music as the mechanism.”

‘It can’t be superficial’

As Lampkin waded through the crowd after his performance, two spectators stopped him to thank him for his performance. “It felt so good to know that when I spoke, it really touched people,” he told me. He later left the Lab with phone numbers, new Facebook friends and musical collaborations in the works.

What, I wondered, makes the Lab different from typical public media events?

Marketing could be responsible for some of its success. Weber and Brown typically promote each Lab with a custom-commissioned poster. The Lab’s registration website is notably independent from 88Nine’s main page and exists outside of 88Nine’s brand identity, attractively spare with striking photos throughout. As Brown put it, “If you don’t care about the branding and the imaging, then why will the young people care?”

Or its success could come from their outreach strategy, which includes visiting local music and English teachers and direct outreach by email. Teachers serve as invaluable advocates for the program, and Weber hopes that they’ll also integrate the Lab into curricula by offering extra credit for attendance. 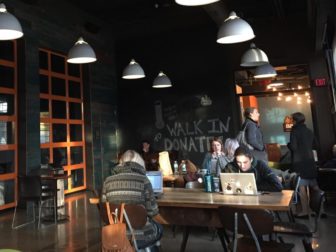 The Lab also demonstrates the power of a station’s physical public space. On both of my visits to 88Nine, students and retirees alike sipped coffee at the in-house cafe where Weber and Brown hatched their idea. Without this space, the Lab may have launched elsewhere or not at all.

But the Lab’s success could also be boiled down to a simple rule: Especially around young people, you can’t fake giving a shit. “It can’t be superficial,” Brown told me. “It has to be real, it has to be heartfelt. It has to reach them where they are.” As marketers market, as fundraisers fundraise, and as institutions institutionalize, our organizations too often cede sincerity for passability, politics or profit.

“We work hard to manage our costs, while ensuring delivery of high-quality programming,” Brown said. “It doesn’t take that much money, ultimately, to change a kid’s life.” Weber and Brown are putting that idea to the test and hope to expand and partner with public radio stations in other cities. They’re already holding one-off pop-up Labs at schools and in communities around the country.

Such youth programming is among the purest distillations of public media’s mandate to engage with communities. It brings in new audiences, enriches a community, injects vibrancy into the station and, as Kleiman puts it, “demonstrates to current supporters how much you care about the community — that you’re giving back in a meaningful way.”

To Weber, though, “success comes in the form of knowing that we are touching individual students’ lives.”

As the show wrapped up, a crowd of students slowly joined Lampkin, dancing and cheering on performers from the back until they too were part of the crowd. Between sets, Lampkin said, like he couldn’t contain it, “I’ll definitely be coming back, for sure.”

Brown later told me that “the future of public media relies on younger generations finding it, using it and making it a part of their lives.” By that and any measure, she and Weber are succeeding. Lampkin and dozens of fellow musicians have made The Music Lab and 88Nine part of theirs.

Some lessons from The Lab’s work:

Ian Fox is a freelance writer exploring community engagement programs in public media. In Washington, D.C., he worked in development at NPR and in philanthropic partnerships at The Pew Charitable Trusts while mentoring high school journalists through the YMCA Youth & Government program. He now interns at the podcast app RadioPublic and the PRX Podcast Garage community studio in Allston, Mass. Do you know of an engagement effort that he should highlight in this series? Let him know @IanNFox or IanNFox@gmail.com.