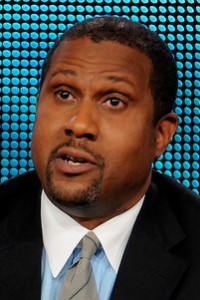 Smiley said in the suit that PBS’ decision in December led to layoffs of 20 of his employees and caused “multiple millions of dollars in damages” to his production company.

In a statement, PBS called the lawsuit “meritless” and said it was “yet another example of Tavis Smiley’s attempts to distract the public from his pattern of sexual misconduct in the workplace.”

Both PBS and PRI, which distributed Smiley’s radio program, cut ties with Smiley after allegations of his misconduct surfaced.

But Smiley contends in the lawsuit that PBS never informed him of the “substance of the allegations or names of the accusers,” and that the network’s investigation of his behavior “was poorly executed and incomplete.”

The complaint states that Smiley informed PBS that he had had “consensual relationships with workplace colleagues” and that neither his production company nor PBS had policies prohibiting such behavior.

The PBS statement said the network hired an independent law firm to conduct the investigation, which included “a lengthy interview” with Smiley and “yielded credible allegations of additional misconduct inconsistent with the values and standards of PBS.”

Smiley also alleges in the complaint that PBS over the years “has been hostile to the editorial content” of his program, “in particular, on issues that matter to persons of color.”

“The notion that PBS’ decision to suspend distribution of the program was made for any reason aside from Mr. Smiley’s own behavior is ridiculous and false,” the PBS statement said.

The lawsuit accuses PBS of conducting an audit of the production company’s books as part of a “harassment campaign” against Smiley. That audit was the first in the firm’s 14-year relationship with PBS, the suit said.

The suit alleges that the audit was based on “the insulting stereotypical premise that an African American owned business will have shoddy accounting records.”

Smiley is requesting damages and a jury trial. PBS has 21 days to respond.