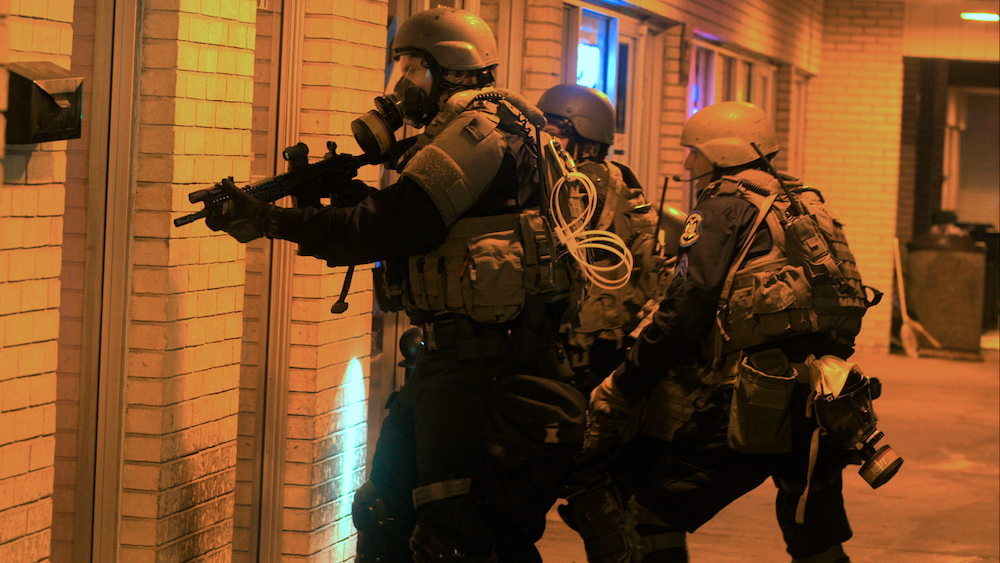 Police depicted in "Do Not Resist" prepare to raid a storefront in Ferguson, Mo.

A POV documentary directed by a filmmaker whose father was a SWAT-team officer documents how police departments are using equipment made for and used during war.

Craig Atkinson initiated Do Not Resist after observing the police response to the 2013 Boston Marathon bombing. The use of military equipment during pursuit of the perpetrators was far beyond what he recalled from his father’s career in policing. “For a lot of people, it was the first time that they had seen the level of equipment that had been gifted or donated to law enforcement post-9/11,” Atkinson said.

He began following uses of military equipment in community policing for the film, which marks his directorial debut. Do Not Resist, which won for best documentary feature at the 2016 Tribeca Film Festival, will make its national broadcast premiere on POV in February.

Atkinson used an observational style to take viewers into a SWAT raid without telling them “what to think about it before or after,” he said. He looked at police departments across the U.S. to document how equipment such as the Mine-Resistant Ambush Protected vehicle, developed for use in the Iraq War, is used in communities across the country.

Atkinson initially set out “to show the full range of the SWAT-officer experience, because clearly there’s times where this equipment can be used effectively. … Look no further than the Las Vegas shooting.”

While the film was in production, his crew did not witness an active shooter or barricaded gunman situation, like in Las Vegas.

Instead they discovered that military equipment is deployed for more routine crimes, such as “raids for nonviolent, low-level drug offenses,” Atkinson said. “And so what is represented in the film isn’t the full range of the SWAT-officer experience, but without question it’s the most common use of SWAT.” 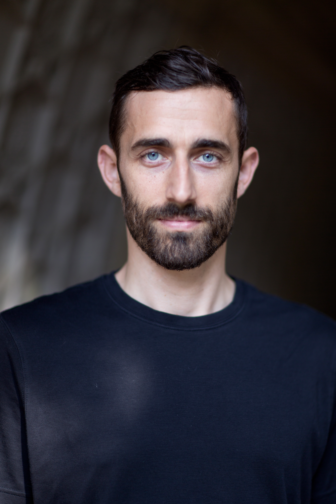 Do Not Resist includes footage of police using battlefield equipment in Ferguson, Mo., in response to street protests following the 2014 police shooting of Michael Brown. In another sequence, a SWAT team uses an MRAP and a slew of heavily armored officers for a drug raid. After a thorough search of the suspect’s house, which was damaged in the process, police find just a gram and a half of marijuana at the bottom of a bookbag.

The subject of policing tactics for violent crimes and riots isn’t an abstraction for Atkinson. His father was on a SWAT team outside of Detroit from 1989 to 2002. He’s noticed differences in how SWAT teams are deployed today compared to when his father served.

“His department did 29 search warrants total,” Atkinson said. “You contrast that with teams that are going out of a department of a similar size, and they’re doing three to four raids a day over 200 times a year.”

Atkinson’s family connection to law enforcement was especially attractive to POV’s producers when they decided to acquire the film.

Do Not Resist came from “a place of respect for the force,” said Justine Nagan, POV EP. It also aimed to “help audiences raise questions about the militarization of police and spark dialogue in cities across the country.”

Nagan sees Do Not Resist as an “urgent film … to start important conversations about community policing, priorities and resources.”

Through an engagement campaign supporting the broadcast, POV will make the documentary available for screenings through its POV Community Network, an online library of films available for community events and classroom uses, beginning Jan. 1. Lesson plans and discussion guides will be available to assist teachers or hosts that lead screenings.

POV is “committed to connecting with officials on the local level, such as city council members and police departments, to provide the film as a jumping-off point for workshops and community meetings focused on local issues,” said Alice Quinlan, manager of community engagement and education.

POV partnered with Wisconsin Public Television to screen Do Not Resist in Madison, Wis., last month. A representative from the Madison Police Department participated in a Q&A of the film.

For Atkinson, the distribution deal with POV allowed him the creative control he sought for the documentary.

That control was also important “because of the promises that we made to the police officers to even obtain the access,” he said. “I couldn’t really turn that over in good conscience. … Other people might have edited it just fine, but there was no guarantee.”

POV was “happy to take the film as is,” he said.

The film debuts on POV Feb. 12 at 10 p.m. PBS has designated it for common carriage.

One thought on “POV documentary examines militarization of policing”