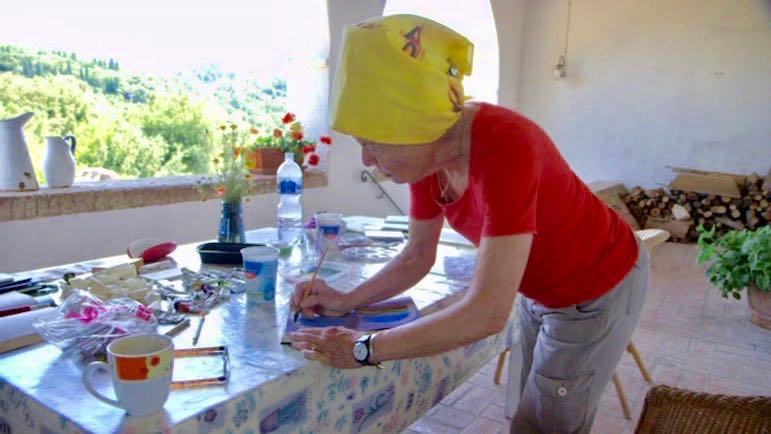 Printmaker Sabra Field works in her studio in the film "Sabra," a documentary that aired as part of Vermont PBS' "Made Here" series.

Eric Ford of Vermont PBS was en route to the New Hampshire Film Festival recently on a scouting mission for “Made Here,” the year-old content initiative that is forging a localized brand identity for the public TV network.

Through “Made Here,” Ford is actively engaging creative talents across northern New England and building Vermont PBS’ network of local partners. As senior manager of local content, he acquires independently produced programming across genres, shot anywhere, any time, as long as local talent is behind the camera.

Until moving to Vermont PBS last year, Ford spent a decade as communications director of Burlington City Arts, a hybrid city agency and nonprofit. He joined the state network as it sought to differentiate itself in a cluttered market where public television viewers can catch The Great British Baking Show on Netflix and Sesame Street on HBO.

“Vermont is fiercely into its homegrown food, beer and all kinds of local products,” Ford said. With “Made Here,” Vermont PBS bet that local pride will carry over to public TV programming as well.

One year into “Made Here,” press coverage has been stellar, and several shows have been real standouts. Ford is inundated with pitches. Audiences are praising the local content as well. “I’ve had people say, ‘I’ve been watching PBS so much more now that there are local programs,’” Ford said.

Direct viewer feedback has been a key gauge of the initiative’s success. Because the programs air most frequently on the state network’s secondary channel, Vermont PBS Plus, the audience is too small for Nielsen to provide ratings. Convincing underwriters to sponsor the series remains an ongoing challenge.

The shortage of underwriters hasn’t dampened Ford’s ambition to extend “Made Here” into a regional content-sharing enterprise with other public TV stations. Beyond public broadcasters in the region, Ford is also courting media partners in Montreal and Quebec.

“Made Here” started “as a way to expand our platform and open it up to other content creators in the region to create something exciting for our viewers,” he said. Eventually, he added, “we would like to establish our own like-minded local ‘Heard-in-the-Northeast’ collaboration where we could say, ‘What are you looking for? What am I looking for?’ Where you know each other, and you know [each other’s] interests.”

“Made Here” was one of four finalists in Local That Works, a collaboration between Current and the Public Media Futures Forum to identify local efforts in public media to create innovative and replicable multiplatform content, engagement and revenue initiatives. Ford and representatives of the three radio stations presented their projects during the Public Radio Super-Regional Meeting last month in St. Paul, Minn.

“Local programs created by our neighbors are something entirely unique, fresh and cannot be replicated by any other source,” Ford said during his Sept. 26 presentation. “The ‘Made’ in ‘Made Here,’” he explained, “refers to the maker, indicating that we are emphasizing the creators behind the content.” The “Here” refers to the entire region “from Vermont, New Hampshire, Maine, western Massachusetts, upstate New York — and even Quebec in Canada,” he added.

Few public TV stations have created their own series showcasing locally produced films. KQED in San Francisco has the longest track record and offers shows such as Film School Shorts for national broadcast. In 2015 South Carolina ETV and North Carolina’s UNC-TV paired up to create Reel South, featuring works by Southern storytellers and picked up by World Channel.

Vermont PBS is a much smaller operation. Its progress with “Made Here” could guide stations that are looking for new ways to offer something uniquely local to their viewers.

Ford is the only Vermont PBS staffer who is dedicated to “Made Here,” though the video team handles closed-captioning and all other adjustments to package the films for broadcast.

Made Here “doesn’t fit into a nice, neat package,” Ford said. “It is something new. It’s not a known quantity.”

Ford acquires over half of the programming for “Made Here” at local festivals. He also seeks out filmmakers directly, or they find him.

“There’s a lot of overlap, because once you meet people they come back to you,” he said. “I am a year in and definitely on filmmakers’ radars.”

The quality of content is surprisingly good, he said. People self-edit before they submit, he said. “I very rarely have to say no.”

About five Made Here shows debut each month on Vermont PBS’s primary channel, usually at 7 p.m. as a primetime lead-in or in a slot where PBS has scheduled a repeat in primetime.

There’s no set weekly time slot for Made Here premieres, Ford said, because the strategy was “planned purposefully to imbue the schedule with local.” Each show gets a weekend repeat and then migrates to Vermont PBS Plus.

On the multicast channel, Made Here films air 8–11 p.m. weeknights and a block on Saturdays. If Ford can acquire digital rights, shows also stream on the Vermont PBS website. Each piece of on-air and online content is tagged with a visual “wrapper” with the Made Here logo and producer details.

Since its premiere last fall, Made Here has presented three seasons of about 20 new shows each — in fall, winter/spring and summer. Its fourth season began in September, when the lineup featured two documentaries selected to complement Ken Burns’s and Lynn Novick’s The Vietnam War.

During the first winter season of Made Here, a set of four ski documentaries by Vermont filmmaker Rick Moulton turned out to be a plum acquisition after premiering on Vermont PBS during February sweeps. Two films — Spirit of a Classic: The Story of Mad River Glen (1988) and Ski Sentinels: The Story of the National Ski Patrol (2008) — were the network’s highest- and second-highest-rated shows among men 35–49, and second- and third-highest-rated for women in the same age group. That’s significantly lower than the average age of Vermont PBS viewers, which is 60-plus, Ford said. He suspects that a fantastic ski season this winter played a part.

Another standout was Sabra, a documentary about Vermont artist Sabra Field by Dartmouth College film professor Bill Phillips. The film electrified the network’s December 2016 pledge drive, catapulting Vermont PBS into the rarefied top five among PBS stations for nightly dollar totals and pledge performance, according to PBS data provided by Ford. Fields is a well-known printmaker who has lived and worked in Vermont since the 1960s. Her depictions of green pastures, blue skies and barns are pastoral idylls with tremendous public appeal. She designed a postage stamp for Vermont’s bicentennial that became a bestseller for the U.S. Postal System.

Through a partnership supporting aspiring filmmakers, Made Here presented the Champlain College Student Film Showcase in March. The collection featured a dozen works produced by students pursuing degrees in broadcast media production and filmmaking. Ford, who hopes the university connection will help bring younger viewers to the station, expanded the footprint of student-produced work this fall.

“Made Here” launched on an annual budget of $15,000. In a vote of confidence on its success to date, the network committed $20,000 for its second year. The initiative can also draw from Vermont Public Television’s Green Mountain Content Fund, created last year from a $50,000 individual donation to support local production and acquisitions.

Ford pays $1,000 to $2,000 to license features, specials and series, $400 to $800 for hour-long shows, $200 to $400 for half-hours and $100 to $200 for short-form content. He negotiates rights with each filmmaker individually, seeking one- to three-year windows for broadcast rights along with streaming windows that range from several weeks to several months.

Among the filmmakers with whom Ford has built relationships, those with the most experience seek a path to PBS distribution, which Vermont PBS doesn’t provide. Nor is Ford able to provide production financing. He does offer letters of intent — affirming interest in airing a show — that can attract other funders. 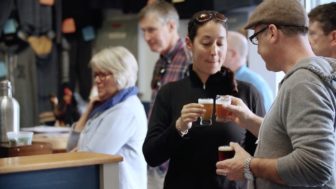 An ongoing series also available for streaming, A Day in Vermont, in which Vermont-based plein-air painter Peter Huntoon takes viewers through his artistic process and demonstrates technique, has also popped on Facebook.

Scarce underwriting is the greatest obstacle for Made Here, Ford said. Diverse programming — including animated shorts, ongoing series and feature-length films covering an ever-changing mix of topics — complicates the pitch.

Made Here “doesn’t fit into a nice, neat package,” Ford said. “It is something new. It’s not a known quantity. The ratings aren’t there yet.”

But “I feel with time and care we can develop a sales program that will work,” he said.

Made in New England

Three Made Here films also aired on Maine Public: Sabra, Brew Hampshire and High Water Mark: The Rise & Fall of The Pants, a documentary about the cult following of a beloved Burlington band. Maine Public acquired rights to air each of the shows separately, but Ford and Maine Public CEO Mark Vogelzang want to build closer ties.

“I applaud what Vermont PBS is doing, and we want to collaborate and partner in as many different ways as possible,” Vogelzang said. “All stations need to do programming that is more specific to their region.”

“We have to be trying out and testing all these different models,” he added.

Ford envisions a regional partnership with public TV stations in northern New England and Quebec. Vermont PBS’s broadcast reach into Canada accounts for a third of the network’s potential audience.

The collaboration can be as simple as stations alerting each other to interesting local content, as happened with Maine Public, or sharing that content, Ford said. Right now he acquires rights for only Vermont PBS, but he hopes to eventually find a way to group license shows. “That’s a ways off,” he said.

Meanwhile, he’s trying to make it as easy as possible to share content with other stations. After Made Here presents a new show, he said, it’s been “packaged and transcoded, formatted and closed-captioned. It’s ready to go.” Other stations can use its Made Here’s packaging, as Maine Public did with two films, once they acquire rights.

Ford said Made Here shows are not available through the PBS interconnected system.

To Vermont PBS CEO Holly Groschner, the role of “bringing together the arts community in Vermont and the region” works well for the state network. Her staff is currently exploring how “Made Here” will evolve.

One of the questions to be resolved is whether the initiative will devote more time and focus to film on Vermont PBS Plus or aim for a wider reach.

“I can’t go around and say, ‘I need ski films,’” he said, almost regretfully, though he added that it may be possible as he develops longer relationships with filmmakers.

“Made Here” is all about relationships, he said. “It’s not just about ‘Here’s a check.’”