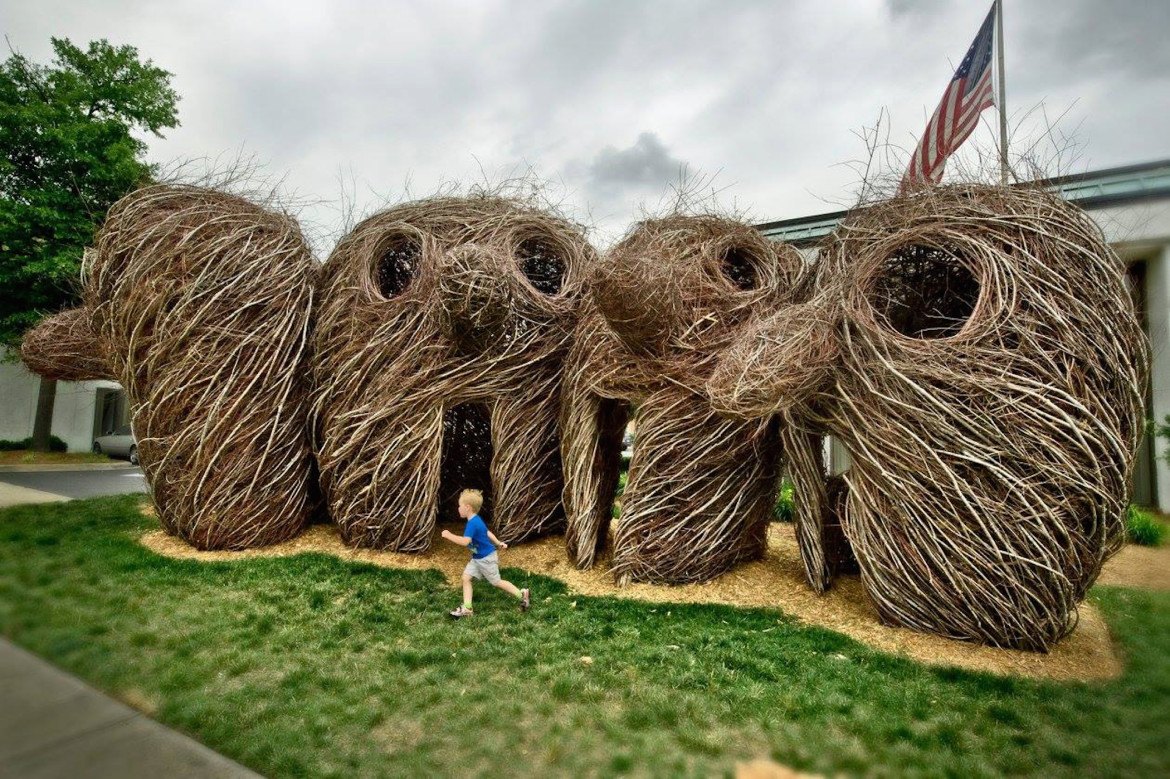 One of the Reel South films celebrates the 25-year career of environmental artist Patrick Dougherty and his massive sapling sculptures. (Photo: Groove Productions)

A listening tour to deepen ties with independent filmmakers has led to a new public TV series — not from PBS, but two local stations that partnered with a documentary nonprofit.

Early last year, while PBS was on its nationwide listening tour to rebuild its relationships with indie producers, UNC-TV was undertaking that same process throughout the state of North Carolina. Those meetings inspired Reel South, a collaboration with South Carolina Educational Television and the Southern Documentary Fund that draws on the rich Southern tradition of storytelling.

Reel South, which premiered this month on both stations, already has a 71 percent national carriage on the multicast World Channel and is airing on stations as far away as KCTS in Seattle. AETN in Arkansas is planning an afternoon-long marathon on its main channel Feb. 14.

In creating the series, UNC-TV hired Rachel Raney, former executive director of the SDF, for a new position: director of independent productions, acting as its liaison with filmmakers.

Raney called the creation of Reel South “an alignment of the stars.”

Before the partnership came together, both state PTV networks had been pondering how to engage filmmakers in their communities. Each had shuttered their own longtime local documentary series: Southern Lens on SCETV and North Carolina Visions on UNC-TV. Raney had produced a similar program at KQED in San Francisco, Truly CA: Our State, Our Stories.

Reel South “is the next generation of that idea” of local documentary showcases, Raney said. “It’s regional, and the tools of documentary filmmaking have become so much more accessible over the past 10 years. You don’t have to move to the West Coast or New York to be a filmmaker; you can stay in the region, do good work and tell the great stories right in your own backyard.”

“Voices that need to be heard”

In a serendipitous way, the SCETV co-production A Chef’s Life provided part of the roux to cook up Reel South. The popular PBS Food show, which has won Peabody and Emmy awards, follows the owners of the restaurant Chef & the Farmer in Kinston, N.C.

“I met Amy Shumaker at SCETV because of her work on that,” Raney said. “That show brought a lot of us together.” The creator and producer of A Chef’s Life, Cynthia Hill, was a co-founder of the SDF, which also sponsored the show.

Shumaker told Raney that she’d love to get a documentary series going again. As the national coordinator for US INPUT, the international public television screening conference, Shumaker organizes panels to select the best American programming for worldwide competition. She knows firsthand how to mine the deep vein of quality programs produced for public TV.

Around that same time, UNC-TV was kicking off its own listening tour for filmmakers, as a follow-up to its 2014 strategic study to shape the station’s future. One recommendation was that the network reach out to independent producers to develop and acquire more original content.

The station asked the SDF to help organize meetings with filmmakers in Raleigh, Winston-Salem, Charlotte and Wilmington. Founded in 2002, the SDF, based in Durham, N.C., cultivates films made in or about the South. It has sponsored more than 100 projects, including the critically acclaimed The Case Against 8 on the legal battle for marriage equality.

According to a UNC-TV report on the listening tour, “the conversations that unfolded at the four meetings were honest, direct, professional and ultimately productive.”

One of the action items was to develop a “new series to showcase independent documentaries about the American South.”

“Coming out of those conversations, and also talking with SCETV, we came to the realization that there’s a lot of great storytelling here, great filmmakers and voices that need to be heard,” said Shannon Vickery, director of production at UNC-TV. The three organizations decided to collaborate, using the curated model of national showcases Independent Lens and POV.

The two Carolina pubcasters had worked together in the past, Vickery said, “but mostly very informally. They’d let us know about shows coming their way and we would do the same for them. But as far as a formal and structured cooperation, I think this project is unique.”

To get the series up and running, the three partners split any costs, working on a strict budget. Raney knew of several promising regional films “in that sweet spot,” as she said, already screening at festivals but not yet broadcast. SDF oversaw producer agreements. UNC-TV handled post-production tasks and packaging; SCETV took over station relations and promotion.

The result is a pilot season of six episodes, four 30-minute and two 60-minute films:

Beyond providing compelling films to public broadcasters, the series should also help counter stubborn Southern stereotypes that run through some reality programming, Raney said. “It’s called ‘hicksploitation’,” she said. “Shows like Swamp People, My Big Redneck Vacation and Moonshiners. A lot of us live in the South, and that’s not who we all are.”

Being a Southerner “means so many things beyond waving Confederate flags around and clinging to the past,” said Ellen Barnard, e.p. of Counter Histories: Rock Hill and a partner in Tomorrow Pictures with the film’s director, Fr3deR1ck Taylor.

Their Atlanta-based production company created the film in cooperation with the Southern Foodways Alliance, a nonprofit that celebrates culinary traditions. The alliance’s “Counter Histories” series of short films marks the 50th anniversary of lunch-counter protests throughout the South, when blacks could not dine in restaurants alongside white customers.

Counter Histories: Rock Hill highlights the actions of the “Friendship Nine,” a group of young black men — most from Friendship Junior College — who went to prison after refusing to leave a segregated lunch counter in Rock Hill, S.C. “They tested this very important strategy of going to jail instead of being bailed out,” Barnard said. “Until then, small towns had been getting rich on protesters’ bail fees. But that was just putting money into the hands of people the protesters were fighting against.”

The Friendship Nine’s actions “changed the trajectory” of civil rights protests, she said.

Barnard and Taylor interviewed five of the protesters and creatively re-staged scenes from 1961 around what remained of the local McCrory’s, a five and dime store where the sit-in took place.

“We started out making a short film, but had so much great material it grew into 30 minutes,” Barnard said.

Initially the film was intended for broadcast on KLCS in Los Angeles, which airs other Tomorrow Pictures programs. “We thought we also might sell it to local stations, do some networking and see who else might be interested,” Barnard said.

Then Raney asked them to submit the film for Reel South. “I really hope that the series model flies,” Barnard said. “Producers in the South could give programmers so much content. For filmmakers, it’s a natural platform for the brilliant work being done here. The PBS audience appreciates documentary filmmaking, and new documentaries can help add audience to PBS stations.”

The three Reel South partners are already planning for an expanded Season 2. They’re meeting next month to analyze the first season, which was offered for local station broadcasts through the National Educational Telecommunications Association, and look ahead to the future.

“We’re just gearing up to talk to potential sponsors,” Raney said. “When the idea came up, we didn’t want to try to raise the money with just an idea. With the first season done, we have the proof of concept.”

For Season 2, there’ll be a wider call for entries. The partners want to get programmers and others involved in the curation process. They’re aiming to expand the series to 13 films, grow carriage and possibly secure grants around the diversity of voices. Most of the six films were directed or produced by women, along with a Latino and an African-American filmmaker. “We hope to continue that,” Raney said.

“I think there’s a big appetite around the country for Southern storytelling,” she added. “It’s a unique region; we have our own strong traditions and culture and accent and geography. What we saw with the enormous popularity of A Chef’s Life proves that people really dig stories from the South, especially authentic stories about real people.”

Watch a trailer for Reel South: