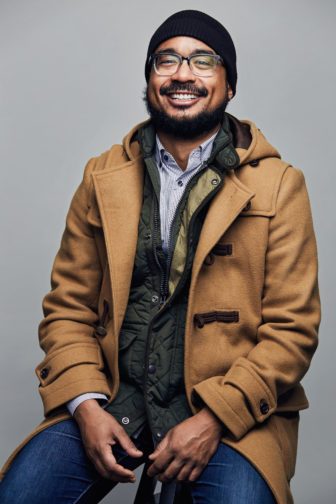 When I was in college, I didn’t really understand the impact and reach of public media. I had watched Reading Rainbow and Sesame Street as a kid and was watching Charlie Rose, but outside of that, working in the PBS system wasn’t on my radar. After graduate school, as I matured, my interest and love for public television rapidly developed. I began working for people who worked in public television and I admired their thoughtfulness, worldliness and storytelling abilities.

PBS calls itself “America’s Largest Classroom,” and it’s an idea that I love and embrace. Like America, public broadcasting is not perfect by any means, but it is an ever-evolving work in progress, and that’s a beautiful thing. My professional career is populated with men and women in public TV who are directly responsible for my growth as a person and professional. From my time as a production assistant on a Henry Louis Gates project to the PBS producer’s academy, my work with Black Public Media and the Independent Television Service, I received a lot of guidance.

To understand the impact of PBS, I don’t have to go any further than a project in Hartsville, S.C., that I worked on in 2014 and 2015. Working for SCETV, I visited places that ranged from rural and low-income to affluent, but the one constant component in people’s lives was public broadcasting. I traveled through the state from top to bottom, and when you mentioned public television or SCETV, you were gold. Generations of families from all backgrounds were raised on content produced by PBS.

“Like America, public broadcasting is not perfect by any means, but it is an ever-evolving work in progress, and that’s a beautiful thing.”

“Nothing’s easy.” “Dig a little deeper.” “What’s the give-a-shit factor?” Those are all questions I’ve gotten about projects, not out of personal or professional hostility, but out of encouragement to really examine how my content will serve everyday Americans regardless of social status. Public media provides me with incredible opportunities to work on stories that inspire meaningful conversations on important issues. Without Black Public Media or the National Minority Consortia (for people like myself), my pathway to storytelling would have been considerably harder. I appreciate every chance I get to work in public media because I understand when the bandwidth to success narrows and help is nonexistent.

I just finished Pops, an 11-episode web series for ITVS Digital. It was an incredible experience and honor to follow fathers on their parenting journeys. We live in uncertain times, with cuts to public media threatened year to year. Arts funding is in short supply while a slew of talented professionals scramble to keep their life’s work relevant.

It’s a wild ride, but I’m always encouraged when I hear, read or watch public media projects that continue to teach America’s classroom.

When I think about public media, I think about what Frantz Fanon said: “What matters is not to know the world but to change it.” And the words of T.S. Eliot: “… And the end of all our exploring will be to arrive where we started and know the place for the first time.”

For me, this is public media.