Jesse Thorn is an accomplished guy — he’s the host of NPR’s Bullseye and proprietor of the Maximum Fun podcast network. And yet, he feels a little insecure about having never attended journalism school.

So this summer, Thorn organized his own journalism academy of sorts and let everyone else listen in. He’s just completed the 15-episode run of his podcast miniseries The Turnaround, a show co-presented with Columbia Journalism Review in which Thorn interviews various legendary interviewers about interviewing, including such public media luminaries as Terry Gross, Brooke Gladstone, Audie Cornish, Ray Suarez, Anna Sale and Ira Glass.

“My goal was to learn tips and tricks,” Thorn said in a recent appearance on Current’s podcast The Pub. “What I learned was that you cannot be anything other than yourself.”

In this excerpt from his conversation with host Adam Ragusea, Thorn describes how he decided to launch The Turnaround.

Jesse Thorn: I was kind of hung up on the fact that I never went to journalism school. And because when I got out of regular college, I couldn’t get a job in radio or journalism, I kind of invented my own job, and that is the job that I’ve been doing ever since. I never really had even a mentor. All I really know about making radio came from either doing it or reading that one This American Life comic book.

I had the idea that I would ask all these people that I know, who I had never heard talk about interviewing, about how and why they did their jobs, in an effort to compare notes and find out if I was doing it wrong. And when we made a list of people, I started with the people that I knew, like Brooke Gladstone and Ira Glass, and then all of a sudden we got yeses from tons of people who have incredible interviewing jobs and careers who I didn’t know. And it metastasized into a big summer-long experiment.

Adam Ragusea, Current: Is it just niggling insecurity that was bothering you, or have you actually put your finger on elements of your interview technique that you think are lacking?

Thorn: Did you want me to list all my faults?

Current: I’ll tell you mine if you tell me yours.

Thorn: I think my faults are that — you can talk to my therapist, you can check in with my therapist about it if you like.

Current: I will not say no to that level of access.

Thorn: I grew up in a broken and very emotionally inconsistent home, and as a means of self-protection I am disinclined to engage emotionally when it’s not strictly speaking necessary. My independence is also a strength; it’s what’s allowed me to build my company and so on and so forth. But as an interviewer I am more inclined to plan and prepare than I am to pursue emotion. 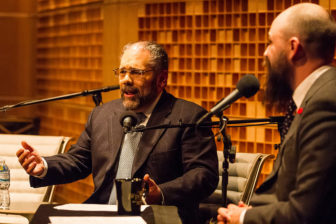 Current: Put that in concrete terms: If you are being afraid of emotion, if you’re not being present, what kind of a question does that lead you to ask that’s a bad question, in your mind?

Thorn: I think it’s more about the question that I don’t ask. I was interviewing Louie Anderson the other day. Louie Anderson is obviously a brilliant and legendary standup comic, the very rare universally respected family-friendly comic. And he is also a brilliant raconteur, a really funny, charming guy. He talked a little bit about the death of his brother, with whom he was very close. It was his younger brother and Louis is, I want to say, the 10th of 12 children.

I listened and was patient about it, which was great. But my immediate reaction that I recognized in the moment was, I don’t want to bother this guy about his brother who died. Which doesn’t always make for the hottest tape.

I don’t know whether it’s moral or immoral, but I know that when I talked to Ira Glass, for example — Ira is somebody who is very sincerely and genuinely — it’s not an act, it’s not a shtick — interested in the emotional lives of others. And he is also, through his 35 years of experience or whatever it is now, always listening for hot tape. He can do those two things at the same time. I know from socializing with Ira occasionally that that’s what he’s like. It’s not a trick. But that is a relative challenge for me.

Current: Let’s listen to a clip from your conversation with Ira Glass.

Ira Glass: I really am thinking like, What’s interesting to me? And as a staff like we talk about that. What’s the interesting part of this thing? What do we really want to know from this person? What is this story? What’s the exciting part? A lot of interviews, a lot of story pitches, they have a kind of like, “Yeah, it’s a story. It kinda goes from here to here to here,” but what’s the fun part? Like, what’s the part that makes you feel like, “Oh, my God, yeah”? Without that, what’s the point of being alive? What’s the point in making radio? If you’re not going to have that in every story, what’s the point of doing journalism? It’s not that interesting. Actually that’s not true; it’s super-interesting, like an amazing job. But it would be so much more interesting if you do this…

Current: It’s funny, Jesse, I think that what you were just talking about makes me think about how a lot of interviewers who … I don’t necessarily admire them or really aspire to be them, but they seem to get stuff that’s interesting, the stuff that Ira was just talking about. They’re almost like children, like they have no barriers whatsoever, they have no hang-ups, they have no sense of propriety, they’re not concerned with looking smart themselves. They’ll just ask like the stupidest, most base question. Joe Rogan is someone who I think does that a lot, and part of why his show is so great. Or, honestly, Larry King is one of those guys who’ll ask the question that everyone is thinking at home, but no one wants to come out and say.

Thorn: You had to bring up Rogan, the podcaster I’m most physically afraid of.

Current: Oh, Howard Stern! He’s a classic example of this. He’s like a child.

Thorn: Yes, absolutely, and he’ll repeat a question over and over and over like a whiny baby. He’ll do anything. But Larry King, honestly, was the most revelatory interview for me, I think because I didn’t know Larry King at all and I went to Larry King’s house out in Beverly Hills.

Thorn: It’s exactly what you think. There’s like a grand entranceway with a grand piano and a giant staircase. We conversed in the trophy room that was just a room completely walled with plaques, awards and photographs of him with presidents and baseball hall-of-famers. He sat down, and he was there with me a thousand percent from the second he sat in the chair — completely sincere, direct, honest. I’m sure many of you know he’s been doing this for 50 years; I’m sure that many of the questions I asked him were questions he had answered before, so he knew what the answer was. 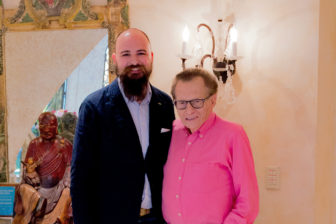 Thorn and one of his guests on “The Turnaround,” Larry King.

But he was absolutely, sincerely conversing with me. It was not a put-on. It was not shtick. It was who he is, and who he is is a fundamentally curious person who has learned through the course of doing his work — and I think, probably if I was going to guess in his case, largely because he did four hours live for decades — through the course of his work, he learned just to follow his heart and mind, just completely, not worry about it, just be in the moment and follow his curiosities. The example that he gave me of a question he would like to ask in the show that was completely mind-blowing to me, he said, “I had a pilot on the show, and I asked him, ‘When you’re going down the runway, do you always know that the plane is going to take off?’” On the one hand it’s like, yeah, the pilot understands. The Bernoulli principle. “And the pilot said, ‘Yeah, I do, but I don’t always know that I’m going to get into the air,’ meaning I know the plane will leave the ground, but I don’t know that the plane will make it to where it cruises.” And he went into all the things that a pilot is afraid of that he could die from, from that dumb question.

I don’t mean dumb question as a pejorative. It is a question that is genuinely open-hearted, doesn’t presume anything and is about something really important to the person that he was talking to. The criticism of Larry King is, What a dumbbell! He just says dumb stuff all the time. And what he said to me was, “Well, sure, of course, that is my greatest strength.” And I was like, “Oh, yes, I guess that definitely is. That is the brilliant thing about you, and I wish I could be more like that.”