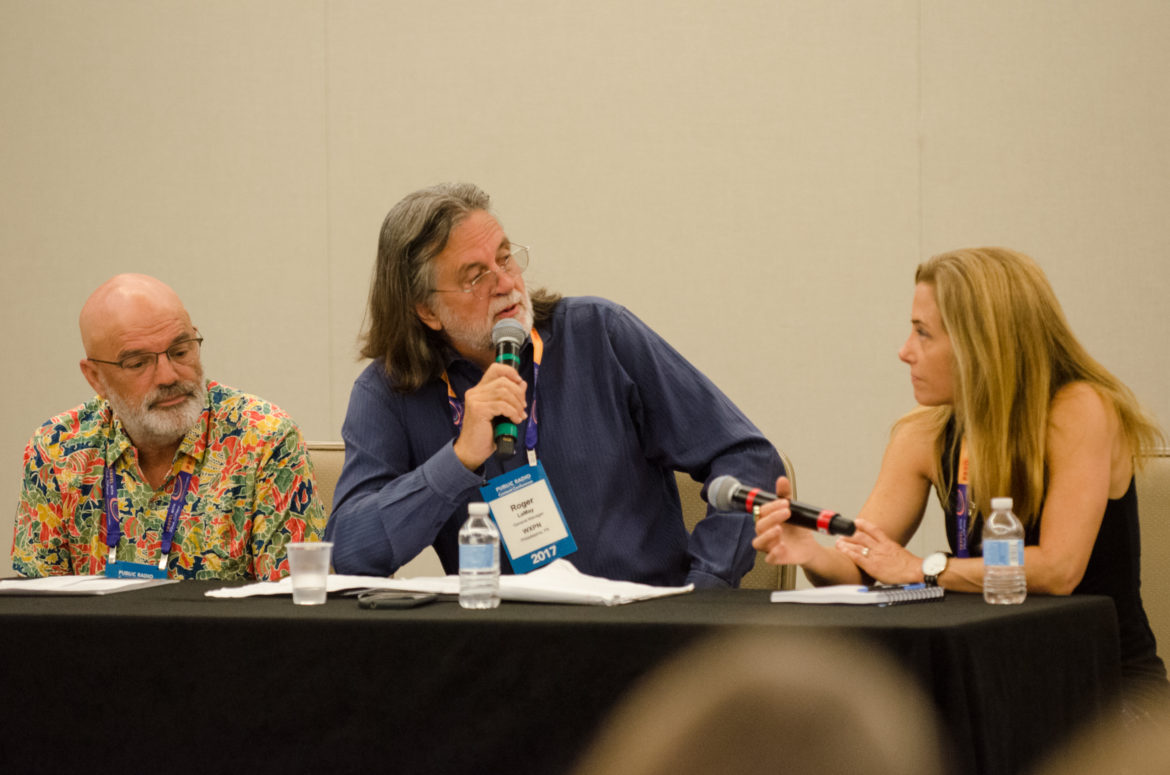 WASHINGTON — A session at the Public Radio Program Directors Conference had spent 45 minutes reviewing challenges music stations face from digital competitors when an audience member asked: Should public radio build its own Spotify?

A public media Spotify would be not-for-profit and based on donations, said Jonathan Butler, director of digital services at Vermont Public Radio. Should public radio deliver music to people through a streaming service similar to Spotify and Pandora but with a public media business model?

Panelists said they had thought about it but ruled it out. Jennifer Ferro, president of KCRW in Los Angeles, pointed to another example of public media aiming to compete with a commercial platform — VuHaus, which presents videos of live performances from contributing stations.

VuHaus’ biggest problem is YouTube, Ferro said. “… [W]hy do you need a VuHaus if you have YouTube?” she asked. “Whenever we talk about digital, we come back to scale for that reason.”

With YouTube, “you’re battling a verb. It’s impossible. There is no business model there. You don’t have enough people that will come there.”

“I think it’s a great idea,” she said, referring to the concept of a public media Spotify. “If we would have had that idea 30 years ago or 20 years ago, we would be so made right now.”

I’m the #PRPD17 attendee who asked that Q – should there be a #pubmedia Pandora/Spotify? Some follow up thoughts /1 https://t.co/xBPlkUZAkh https://t.co/17WovcsnBg

Conference attendees eager to learn new tips and tricks about navigating the digital space packed the conference room. For some, the discussion offered little hope. “It was a realistic panel,” said David Polk, program director of WFMT in Chicago. “Nobody has the answers.”

The conversation often returned to the issue of licensing, which poses a challenge for music stations. The panelists — who represented KCRW, WXPN in Philadelphia and KUT/KUTX in Austin, Texas — said their stations post and record live performances with YouTube and Facebook Live, but the platforms are imperfect.

“That’s not our intellectual property,” said KCRW’s Ferro. “We don’t own that. The labels do. The artists do. And they are really excited to let us know they own that.”

Roger LaMay, WXPN’s GM, asked Ferro to name advantages music stations have in the digital space. “I’ll just go right to the disadvantages, is that OK?” she asked.

“If you don’t have the intellectual property, how are you going to be a music curator?” Ferro added later.

LaMay said the arrival of smart speakers poses both challenges and opportunities. Stations have yet to make money from a presence on the devices but know they need to carve out spaces on them as consumers start using them to listen to music.

“When we’re still struggling to make sure that our website is 100 percent mobile-responsive, it’s pretty intimidating to think we’ve got to work with Alexa now,” said panelist Hawk Mendenhall, associate director of broadcast and content at KUT/KUTX. “Thank God we don’t have to work with Siri. She drives me crazy.”

Stations also need to work together more closely, said LaMay, who added that programmers spend an “absurd” amount of time negotiating licensing issues with labels. A working group of stations has negotiated a new collective arrangement with Sony. “We spent 18 months, and we have a one-year deal,” LaMay said. The stations plan to establish a template agreement that can be customized, he said.