Staffers of NPR’s New York bureau and network alumnae gathered in late June to celebrate the career of audio engineer Manoli Wetherell, who is leaving the network after close to 39 years.

Described by special correspondent Melissa Block as a woman with a “sometimes gruff exterior” but a “loving and soft soul,” Wetherell is moving to New Orleans with her husband Lars, a former NPR producer. Their cats Billy, Bonnie and Clyde will join them. Wetherell’s last day is Friday. 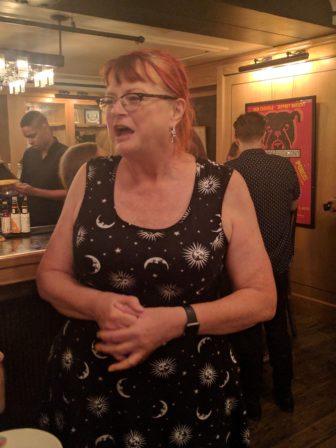 “I am truly honored to have worked with a group of people who are so engaging and so smart and so curious about the world,” Wetherell told several dozen well-wishers at a party held in lower Manhattan. “Thank you so much for letting me be part of that.”

Wetherell is one of a slew of NPR hires who got their start at the Pacifica network. She was tapped to do fill-in work at the New York bureau in 1978 by Ceil Muller, with whom Wetherell had worked at Pacifica’s WBAI in New York. One of the NPR vets who still remembers when splicing tape and alligator clips were vital tools in radio news, she accompanied Scott Simon and Tom Gjelten on reporting trips to El Salvador and Sarajevo during wartime.

She recorded everyone from Rod Stewart to Mitch Miller, Broadway royalty, Mel Brooks and all the members of Monty Python. Wetherell told Current that the two interviews she recorded that touched her most deeply were with the Dalai Lama and Rosa Parks.

Neal Rauch, an engineer at the New York bureau, credited Wetherell with “creating NPR’s signature sound in thousands of mixes, often on deadline and many done live.”

In one of several audio testimonials played at the party, reporter Robert Smith said, “I’ve never seen anyone more calm under pressure, Manoli. You are a consummate pro.”

Among the NPR alumnae who came to raise a glass in honor of the orange-haired engineer was Science Friday host Ira Flatow and Thurston Briscoe, a former arts editor who served as program director of WBGO in Newark, N.J., before becoming an independent consultant. Visiting alums from the Washington, D.C., area included NPR telecommunication staffers John Keator and Ginny Sullivan, as well as producer Bob Malesky and his wife Kee Malesky, the network’s long-time reference librarian.

Malesky told Wetherell that retirement is great because “every day you can do what you want. This life is fantastic. I don’t have to get up for work tomorrow. And neither do you!”