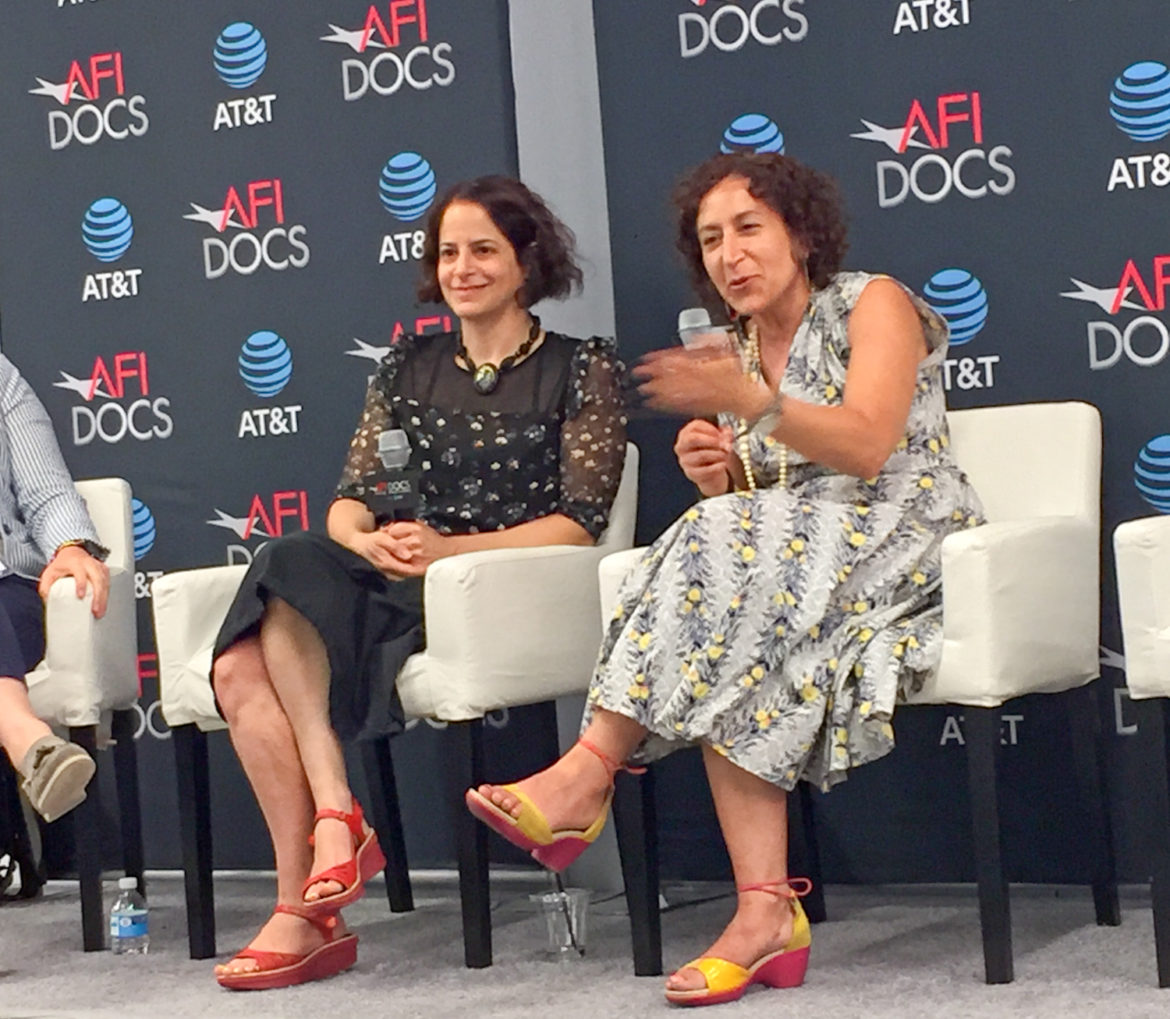 Sometimes creating a top-rated podcast involves debating the deployment of a baby’s cry.

The audio in question was a few plaintive wails recorded on an airplane and used on NPR’s Invisibilia, the podcast about the unseen forces that guide human behavior. The sound complemented a narrative about a man on a plane awaiting takeoff who is tormented by recurring thoughts of a tiny arm dangling from a mangled vehicle.

The question producers faced: Was the wail appropriate or mawkish?

Invisibilia co-hosts Alix Spiegel and Hanna Rosin discussed such decisions during an appearance at the recent AFI Docs Forum in Washington, D.C. (Co-host Lulu Miller is on leave for the current season of the show, working on a book.) The Forum series, sponsored by CPB, presented panels of public media producers and others in conversation at the American Film Institute’s documentary festival.

Ultimately, they kept the baby’s cries in Part 1 of “Emotions,” a two-part episode that kicked off Invisibilia’s third season this month. The main character is a trucker involved in a fatal accident that leaves him with post-traumatic stress disorder. He sued the family of the dead child for emotional distress.

“People were split” on the decision to include the child crying, Rosin said. However, “I can imagine what would happen if you were sitting on an airplane and you were thinking, ‘Oh my God, I’m a child killer,’” she said. “You would be especially tuned in to babies’ cries. They would just enter your consciousness, in a way.”

Deliberating over such details is one reason why each Invisibilia episode can take up to four months to complete, the conversation revealed. Recorded interviews often run up to seven hours. Preparation for interviews takes even longer and continues right up until producers walk into a room to record.

“The real art is creating a space … as soon as you walk in the room,” Rosin said, “that’s essentially like a coat — a safe, warm and inviting, connected space.”

“You have to love the person to some degree,” she said, “and they have to trust you. And it’s a real thing.”

The process differs greatly from Rosin’s previous professional experience reporting and writing for The Atlantic and Slate. “As a print reporter, I just need you to tell me the story,” she said. “I don’t need you to be in a mental space and in reinhabit the story that you’re telling me.”

Rosin said she had to learn that through her audio experience. “You have to bring people to the place where they’re actually inhabiting the words that they’re telling you, which is the magic to some degree, I think,” she said.

At its core, Invisibilia ruminates about emotions, ideas, concepts and other stuff rattling around our brains. As Spiegel said, “The point is to make more visible all of the kind of invisible things that hold us in place or that shape our experience in the world.”

The “Emotions” episode grew out of a theory that human emotions may be less psychologically organic and more culturally driven, Spiegel said. “There are very specific kinds of ideologies that — I guarantee you right now — are sitting inside your head that you are not fully aware of, that guide the way that you interpret your own thoughts,” she said. “Those ideologies were provided to you by the mental health industrial complex” of your own society.

The theory is put forth by Northeastern University Professor Lisa Feldman Barrett, a guest on the episode and a researcher at Harvard Medical School. A chapter in her latest book How Emotions Are Made: The Secret Life of the Brain focuses on how the American legal system is gradually coming to recognize the devastation of emotional injuries.

Invisibilia producers wanted to illustrate the concept of emotional damages. In the Missouri case Jarrett v. Jones, trucker Tommy Jarrett sued driver Michael Jones after Jones lost control of his car in a rainstorm and crashed into Jarrett’s rig. Jarrett claimed that seeing the body of 2-year-old Makayla Jones in the wreckage caused him mental and emotional injuries, including PTSD. The case went to the Missouri Supreme Court, where Jarrett prevailed.

Apart from moving listeners through the controversial legal case, even just portraying a car accident in an audio medium is tricky. Airing the sounds of two cars crashing “doesn’t work for some reason,” Rosin said. “So you have to find a creative way to convey the kind of feeling and urgency and drama of a car accident.”

“The aim there is not necessarily to show you action, it’s to stay inside the characters’ heads because that moment is what’s important,” she added. “That intimacy is going to become more important as the story goes on, about people’s internal realities.”

Spiegel said accident survivors — including those in this episode — talk about experiencing the event as “a series of flashes, so I wanted to create those flashes and resume the narrative when the flashes stopped. So the pacing creates that. And then there are other sounds that hopefully conjure up what it might be like.” Spiegel used a “very subtle” beeping, which leads into a bell tolling “to indicate this is a critical moment.”

Another producer had the idea to use a short clip of a cup spinning to “emotionally create a sense of tension and jeopardy,” Spiegel said.

“I think it’s like, something hanging on the edge, you don’t know if it’s going to fall or crash,” Rosin said.

“Essentially these are all elements that you combine to create an emotional experience,” Spiegel said.

Another vivid aspect of the episode: Jarrett’s labored breathing as he relived the accident and its aftermath. “Asking him about these events, and moving into this space — it’s not the easiest thing to do” for either the interviewer or the subject, Rosin said.

“I hadn’t noticed when I was interviewing him, because you’re face to face and exchanging pleasantries,” she said. “But listening to the tape I was like, whoa, his breath is so heavy when he’s telling me that story.” His breathing is layered into the audio as the story progresses.

Finding her own voice didn’t come easily to Rosin. “I did vocal work with a coach, and I cried for a week,” she said. “I cried in the sessions, I cried out of the sessions, I was like, ‘This is literally the worst.’”

Fortunately, Rosin made it through. The coach’s trick? “She was like, have a bottle of Scotch.”