As debt balloons and revenues weaken among public TV stations, CPB is encouraging broadcasters to reinvigorate their finances — and local priorities — using advice from innovative stations.

The Future Business Strategies initiative is a different kind of project for CPB, said Ted Krichels, system development SVP, who is leading the work. 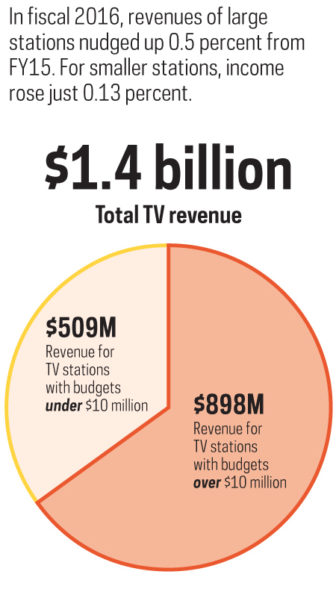 The number of public TV stations carrying a debt ratio of more than 50 percent has steadily grown from 18 in fiscal year 2012 to 32 in FY16, according to CPB. That’s up from nine stations in FY09, just as the recession was hitting. TV revenue in FY16 was $1.4 billion, flat with FY15. And that’s just barely up from $1.3 billion in FY12.

In addition to debt, TV stations face more capital expenses as equipment ages and the ATSC 3.0 broadcast protocol approaches. Atop all that, viewing habits continue to shift away from the legacy broadcast platform, and stations realize they need even more community content and engagement as other local media struggle.

Yet station leaders say a change-resistant culture within their stations is hindering the innovation necessary to face those and other challenges. Some 80 percent of GMs who replied to a CPB dynamic inquiry, or interactive online survey, late last year pointed to deeply ingrained station culture as the main hurdle to new approaches.

But the system must modernize and adapt to survive — and soon, he said.

So CPB is looking for TV stations that want help changing. The work will draw on ideas and advice from a panel of leaders from stations that have already undergone reinvention.

Krichels envisions the work as “partly strategic planning, but also a peer-to-peer type of exercise where we’re all learning as we go.” 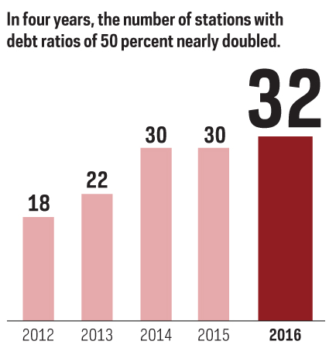 “We have folks within our system who have been experimenting and finding success in these areas,” Krichels said. “I don’t think any of us has the full answers. So this is trying to break down the notion that we are all separate — a national organization here, an institutional organization there. As a system we need to work together to share what it takes to succeed.”

Money was the top concern among more than 75 GMs who responded to CPB’s survey. Leaders answered questions about finances, business strategies, collaborations and challenges to making changes in their organizations.

Future capital costs for TV especially concern Krichels. He points to data from CPB’s recent technology survey that shows TV licensees expect costs of $256 million by 2019 but also predict they’ll have only $112 million to spend.

‘A period of significant change’

Those upcoming equipment costs, upheaval from the spectrum repack and changes anticipated from ATSC 3.0 “all together just reinforces that we are in a period of significant change,” Krichels said.

“So the question is, how do we find ways to innovate and experiment and still keep our business together?” Krichels said. “I think one of the areas I’ve been wrestling with and talking to our advisory panel folks about is, what is it that they can actually try to change the system?”

Before arriving at CPB, Krichels authored Public Media Models of the Future, a report that “shines a light on the local service models and consistently successful approaches taken by station leaders.”

Krichels hopes to build on that concept. He envisions a series of meetings and webinars during which stations help each other toward necessary changes.

Loya said as a relatively new GM representing the smallest station in the group, she’s already learned a lot from others — and she contributed as well. “Our Only in El Paso filmmaker digital series was featured as one way to increase local content at a low cost, and engage community and new audiences on digital platforms,” she said.

Krichels hopes training sessions will begin later this year. The key to all this work, he said, is finding stations that want to change.

“I think if we were to do a forced march” — say, make participation mandatory for Community Service Grant recipients — “we will get people who will check the right boxes and do what they have to do to get there,” Krichels said. “We’ve got to find the stations that really want to understand how to change. And I believe at this point in time, that’s probably most managers.”

Despite the tough work ahead, Krichels remains optimistic. The survey revealed that most GMs are, too, he said.

“By and large we are an optimistic group,” he said. “Managers are excited about the future. We all seem to have a sense that public media is as essential, if not more essential, than ever. So that’s good news.”