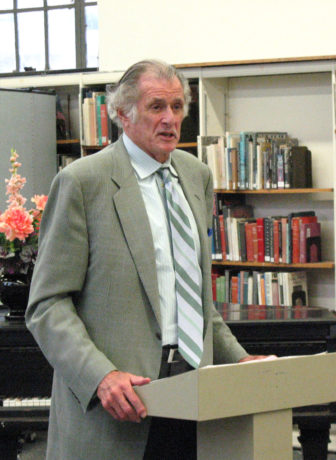 More than 1,600 commentaries by Deford have aired on NPR since 1980. “I have survived so long because I’ve been blessed with talented and gracious colleagues, and with a top brass who let me choose my topics every week and then allowed me to express opinions that were not always popular,” he said in his final commentary. “Well, someone had to stand up to the yackety-yak soccer cult.”

Deford’s commentaries “often caught the attention of an audience that didn’t necessarily give the sporting world a lot of thought, at least not until Frank gave them a reason to, every Wednesday morning,” wrote Christopher Turpin, VP of news programming and operations, and Sarah Gilbert, EP of Morning Edition, in a post Wednesday reflecting on Deford’s contributions to NPR.

Deford appeared weekly on NPR until January 2016, when the network moved him to a monthly schedule and began featuring sports commentaries from other contributors. NPR Ombudsman Elizabeth Jensen noted that prior to the change, Deford had upset listeners with dismissive comments on soccer and made errors in an interview that also prompted criticism of “mansplaining.”

Deford has written 20 books and has contributed to Sports Illustrated and HBO’s Real Sports With Bryant Gumbel. In 2012, President Obama presented Deford with a National Endowment for the Humanities medal for “transforming how we think about sports.”

“Mr. Deford has offered a consistent, compelling voice in print and on radio, reaching beyond scores and statistics to reveal the humanity woven into the games we love,” the NEH said of Deford in presenting the award.