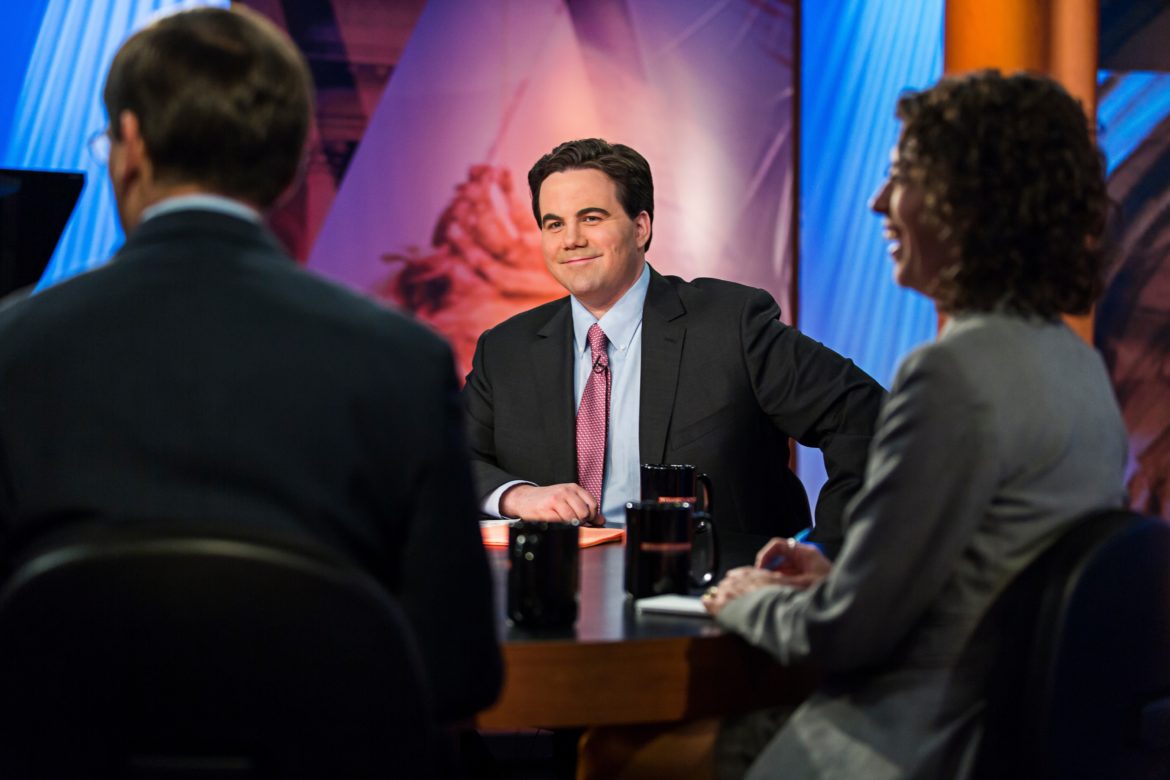 Robert Costa, the new moderator of Washington Week, on the set of the weekly news analysis series that airs on PBS. (Photo: Scott Suchman)

Costa, 31, will continue to be a Post reporter, while tacking on moderator duties for the Friday-night public affairs show. He succeeds the late Gwen Ifill, a trailblazing journalist and public TV icon who died of cancer in November.

“This is a wild time in American politics and the opportunity to bring together the best reporters every Friday night for civil, engaging discussion is something that makes me thrilled and humbled and excited at the same time,” Costa said. “I think it’s also a program with such integrity, and my goal is to continue to follow the example of Gwen and all the other previous moderators.”

Costa described Ifill as a friend and mentor, and said he plans to keep the show Washington Week, “the best place for reporters to come together and open up their notebooks and talk in a candid and civil way” about public affairs.

Costa doesn’t foresee any problems balancing his role as a moderator with his continuing duties as a political reporter who competes with the reporters around the table for scoops with in the White House and on Capitol Hill. “The rivalries and competition can end on a Friday night for half an hour,” Costa said. “I think that’s what Washington Week has always been.”

“The rivalries and competition can end on a Friday night for half an hour.”

As a younger journalist, Costa said doesn’t want to lose his “reporter touch” in the 24-hour news cycle. He expects his daily reporting to inform his questions and decision-making on Washington Week, and allow him to bring some granular details to the table. “If I’m bringing anything to the show, it’s that I’m a reporter who’s in the mix every day, covering all these big stories, thinking about them critically, and continuing to dive into them everyday,” Costa said.

When Ifill joined Washington Week in 1999, she also became a senior correspondent for PBS NewsHour, then titled NewsHour with Jim Lehrer. In 2013, Ifill was promoted to co-host and co-managing editor of the show, alongside Judy Woodruff. As co-anchors, they became the first all-female team on a network TV news show.

Producing station WETA in Washington, D.C., also considered the demands of the daily news cycle when it began recruiting Ifill’s successors, said President Sharon Rockefeller. The station, also home to PBS NewsHour, decided to return to its  original model and hire new hosts for both shows, she said.

Washington Week should “reflect current reality as well as the legacy show that we have been for 50 years,” Rockefeller said. When asked about plans for a Newshour co-host, Rockefeller said, “We’re not quite ready to announce.”

Costa’s youth is an advantage, Rockefeller said, describing him as “seasoned, mature, and yet young and fresh. “He’s 31 years old … that could bring us a new generation of viewers to Washington Week without losing any viewers that we currently have,” she said.

Rockefeller began following Costa’s reporting during the 2016 primary election and was impressed by his interviewing skills and relationships with sources of varying political views and experiences. “He cares deeply about the heartland, the part of the country that felt ignored during the last election,” Rockefeller said. “He has sources everywhere.”

Rockefeller anticipates “a lot of diversity” on Washington Week as it adds new panelists and  maintains some regulars. “We’re looking at some new people and the people our audience knows well and feels familiar with,” Rockefeller said.

Washington Week has relied on guests hosts since Ifill’s passing, and Costa was among the tryouts. He will continue to serve as a political analyst for NBC News, MSNBC, NewsHour and Charlie Rose, where he once served as an intern.