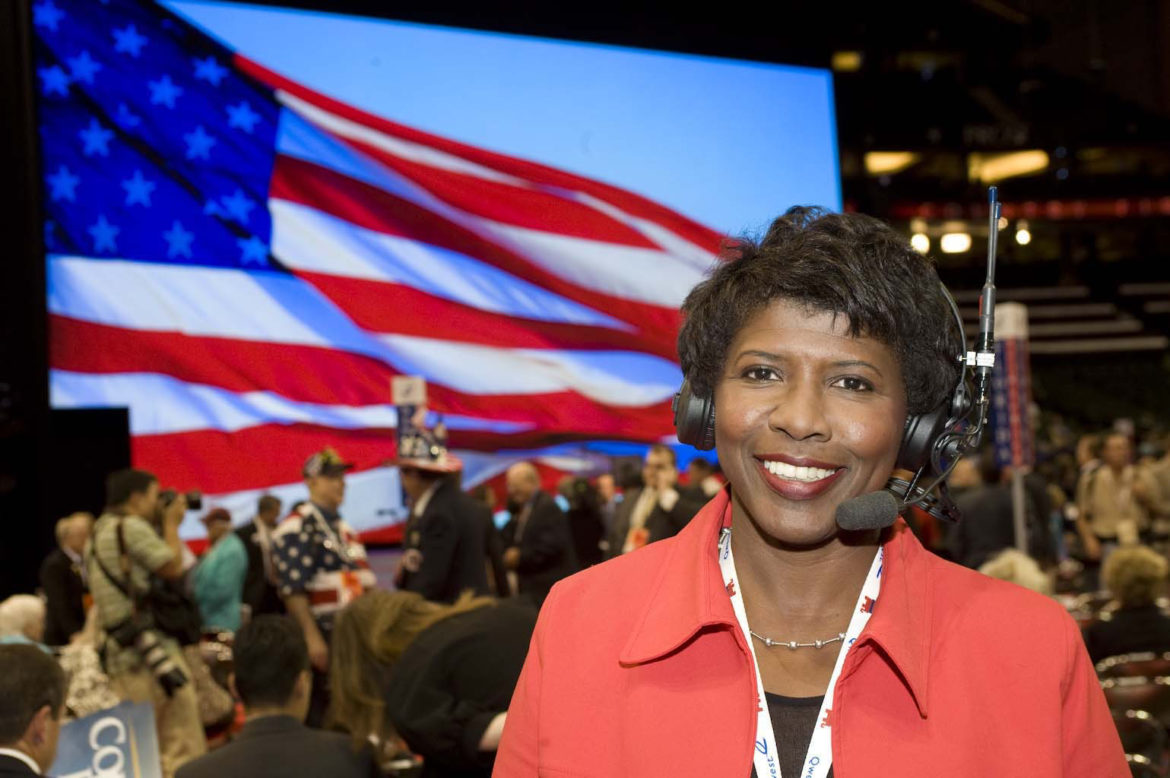 Ifill at the 2008 Republican National Convention.

Whenever Gwen Ifill would walk onto the set of Washington Week in Review, a song would be playing during pretaping before the show opened.

Whether it was Aretha Franklin or Frank Sinatra, “she’d know all the lyrics, all the words,” recalled Jeff Bieber, e.p. of Washington Week, for which Ifill served as moderator and managing editor. “And she’d sing along as people were lighting, and that’s how she’d get in the mood. The light would come on, and she’d be cued and she’d be Gwen Ifill.”

Ifill, a trailblazing journalist and public TV icon, died Monday at the age of 61 after receiving treatments for cancer over several months. Colleagues remember her as a hard-working journalist with a disarming smile and wit who asked tough questions and set a high bar for herself and others.

A pastor’s daughter, Ifill grew up in New York City and attended Simmons College, an all-women’s private school in Boston. Earlier in her career, she reported for the Baltimore Evening Sun and the Boston Herald American (now the Boston Herald).

Ifill began her public TV career in 1999 as WETA, producing station of Washington Week, sought to revamp the show. As the show’s new host, she was the first black woman to anchor a political network TV program.

Colleagues say Ifill didn’t want pundits at her Washington Week table. “She wanted people to come and tell her and the audience what they knew, not what they thought,” Bieber said. “She felt that the audience was smart enough to make up their minds about what to think and she stuck to that.”

When Ifill joined Washington Week, she also took on a role as senior correspondent for PBS NewsHour, then titled NewsHour with Jim Lehrer. In 2013, Ifill was promoted to co-host and co-managing editor of the show, alongside Judy Woodruff. The anchors were the first all-female team on a network TV news show.

Ifill was also the first black woman to moderate a vice-presidential debate, in 2004, and she moderated that debate in 2008 as well. This year she co-moderated one of the Democratic debates between Hillary Clinton and Bernie Sanders.

“A leader, a colleague, and a friend”

“Before Gwen was an icon of journalism, she was a reporter’s reporter,” wrote Michael Oreskes, senior v.p. of news at NPR. “A leader, a colleague, and a friend. Journalism wasn’t just a job for Gwen. It was a mission. The truth makes society better, she knew, and she made all of us better, too.”

“We join the entire public media system in expressing our sadness over the news of Gwen Ifill’s passing,” CPB President and CEO Patricia Harrison said in a statement.

President Obama extended condolences Monday during his first press conference since the presidential election, calling Ifill a friend whose reporting he appreciated, even when he was on the receiving end of “one of her tough and thorough interviews.”

“She was an especially powerful role model for young women and girls who admired her integrity, her tenacity and her intellect, and for whom she blazed a trail as one half of the first all-female anchor team on network news,” Obama said. “Gwen did her country a great service.”

In a 2013 @nytimes interview, Gwen Ifill reflected on what her @NewsHour appointment could mean to a new generation https://t.co/WK1EYWU0ZK pic.twitter.com/7tksE2efaZ

“Gwen was the platinum standard for political journalists and she was such an inspiration to African-American women in the business,” Washington Post staff writer and former National Association of Black Journalists President Vanessa Williams said in a statement. “She was a tough, smart reporter, with a warm, generous spirit who never hesitated to help, financially and with her time and talents, when asked, whether by NABJ or by a student who approached her for a few words of advice and a selfie.”

Ifill stayed focused on her work during her cancer treatments, according to colleagues. “I’ll never forget, right after she was in the hospital, she went to do the Town Hall with President Obama; she went to do the conventions all during her chemotherapy, and do the Washington Week road shows,” Bieber said. “You could see that she was fighting, but she demanded a lot for herself, and she demanded a lot of other people.”

“We’re all in shock because we never expected to find out that we’re going to enter a world without Gwen in it.”

Ifill didn’t want the public to know about her illness, so colleagues kept it quiet. During one of her last visits with Linda Winslow, former e.p. of NewsHour, Ifill shared that she missed the morning planning meetings where the “smart people” got together and talked about the most important moments of the day.

“We’re all in shock because we never expected to find out that we’re going to enter a world without Gwen in it,” Winslow said.

“We’re devastated,” Bieber said. “Our job now is to carry her legacy forward and especially now when the journalists need to step up and do their jobs. We’re going to work very, very hard to make sure that she is proud. And we won’t let her down on that front.”

NewsHour devoted most of its Monday edition to honoring Ifill.

One thought on “Gwen Ifill, trailblazing journalist and public TV icon, remembered for warmth and leadership”