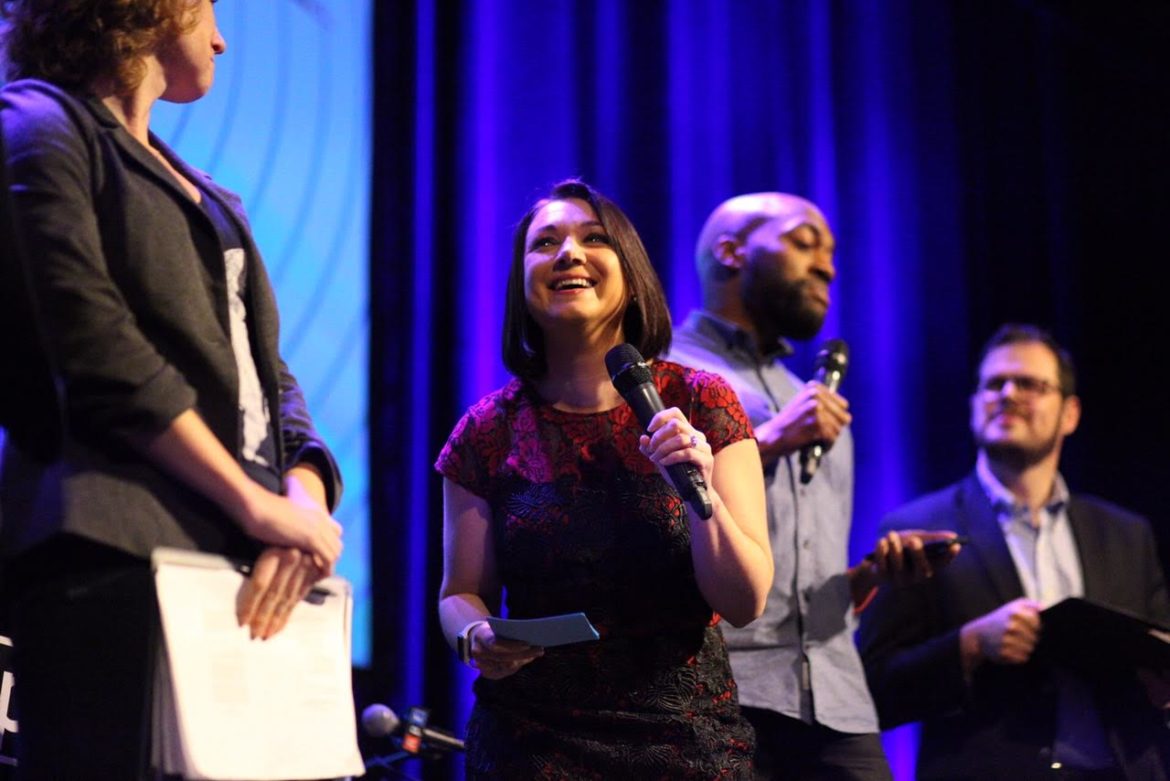 Post-election “autopsies” of the Democratic Party, late-breaking court rulings and interracial love were just a few of the topics discussed during a sold-out live taping of the NPR Politics Podcast Feb. 10 in Washington, D.C.

The event, titled “NPR Politics Podcast Live: President Trump… What’s Next?”, was part of a broader events strategy launched by NPR in February 2014. It has included another Politics Podcast taping in Cambridge, Mass., in December. No other tapings are currently in the works, according to NPR.

The podcast, which consists of weekly roundups of political news each Friday and quick takes on current events throughout the week, debuted in November 2015. Its live event drew over 1,700 people to Washington’s Warner Theater.

It featured roundtable discussions between two different groupings of the podcast’s eight regular panelists followed by “Can’t Let it Go,” a segment in which all of the panelists discussed topics they couldn’t stop thinking about that week.

Throughout the evening, they discussed subjects such as the late-breaking 9th U.S. Circuit Court of Appeals halt of President Trump’s travel ban and similarities between today’s pro-Democrat protesters and the Tea Party during President Obama’s administration.

“… [U]nlike the Tea Party, there’s not even a unifying name,” said political reporter Danielle Kurtzleben. “You may say that’s not a big deal, except that may reflect also that you have a lot of different factions, a lot of different things being protested about, so the question is whether all of this energy can be directed in one particular direction.”

The panelists also talked about a study that found parents are more likely to be upset if their child marries someone from a different political party than if they marry someone of a different race or religion. Panelists encouraged listeners to reach across racial and political divisions to find love and friendship.

“You don’t have to make a lifelong commitment, though,” said White House correspondent Scott Horsley. “Just take an hour … go to a different church and stick around for the coffee hour and see what people are talking about.”

The audience was invited to send in or tweet questions for the panel to answer during the show. One asked about journalists’ role in a “post-truth reality,” which the panelists said would be similar to their role in covering the election.

“We’ve started a lot of fact-checking during this campaign, and I think that there are people who are still interested in reality and facts,” said lead editor for politics & digital audience Domenico Montanaro. “If people aren’t, we will source it really well, and hope that people will come around and recognize that.”

The event marked the last appearance of Sam Sanders as co-host on the Politics Podcast. Sanders promoted his new podcast, currently found under the name Sam’s New Thing on NPR One, which features conversations among Sanders and his colleagues, friends and listeners about what they’re “working on and thinking about,” including politics and pop culture.

Sanders’ co-hosts wished him well, and he thanked listeners.

“We felt such warmth and love from you all the entire last year we’ve been doing this,” Sanders said. “My favorite note that we received over the campaign said, in one line, ‘You helped me get through this year.’ And I read it all the time — and I save all the notes — but I read that one over again, and I say, ‘No, you guys helped us.’”