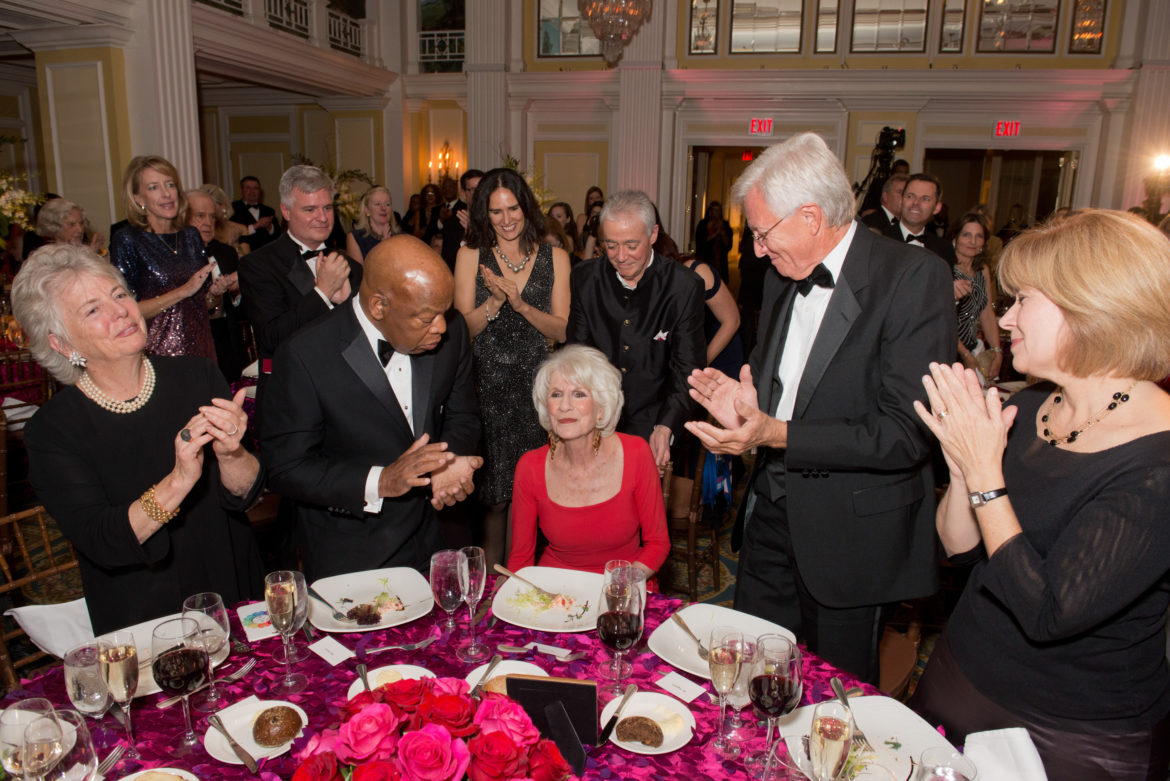 WASHINGTON — Diane Rehm told guests at a black-tie gathering in her honor Thursday evening that with equal parts listening and talking, her show has tried to create a partnership between broadcasters and listeners and foster an environment where all points of views are heard.

So two days after a divisive election, and as she transitions from hosting her weekday talk show to anchoring a weekly WAMU podcast, Rehm began her speech with a call to action.

Speaking at the Willard Intercontinental Hotel, located about halfway between the White House and President-elect Donald Trump’s new Trump International Hotel, Rehm said the evening’s celebration was taking place as many people in the U.S. and around the world are confused and wondering what will happen next.

“The fact is we have no idea, but what I do know is this: We’re all going to have to learn to listen in new and different ways, better and harder to those to whom we have never listened before, with whom we may not agree, those who are different from those of us who sit in this room who may not even be aware of what public radio is,” Rehm said. “Those who feel they have not even been heard.”

And public radio must step up, she said.

“We who’ve been in public radio for all these years thought we were being broad and bold, but now we know we’ve been speaking with only a small portion of the electorate and the population at large,” Rehm said. “We have to do better.”

The always-stylish Rehm looked slim in a pleated red gown, which she complemented with dangly red-jeweled earrings and red nail polish. Like Rehm, the event sparkled, with soft, feathery purple and red tablecloths adding a modern flair.

Rehm’s many gathered admirers at the event, which fans could attend with a $500 ticket, included American University President Neil Kerwin, WAMU General Manager J.J. Yore, NPR CEO Jarl Mohn and Rep. John Lewis, who turned to Rehm and said “I love you” as he closed his remarks. Rehm got up from her head table and thanked Lewis with a hug.

On several occasions throughout the night, speakers and other attendees pointed to Rehm’s warmth and big heart, which they said was evident on air and in person. During the invocation, the Rt. Rev. Mariann Edgar Budde, diocesan bishop of the Episcopal Diocese of Washington, said Rehm has the ability to make others feel like they’re the most interesting person she’s ever met.

But several also pointed out that she doesn’t let people off the hook.

“Very easily, people who represent certain points of view like to get into their talking points, and she has very little tolerance for talking points,” Navroz Gandhi of Annapolis, Md., a longtime listener and member of WAMU’s Community Council, told Current. Gandhi, who attended the event with his wife and father, said that he appreciated Rehm’s interviews about gun rights and gun issues following the Newtown massacre.

Mohn told the audience that Rehm, who started her radio career in 1973 as a WAMU volunteer, pioneered a new sound for radio and journalism.

“For over 37 years, her voice, the incredible questions that she asks, her approach to civil conversation helped shape and define what we all call ‘the public radio sound,’” Mohn said.

NPR personalities including Steve Inskeep, Robert Siegel and Terry Gross thanked Rehm for her work in a video shown during the event.

World leaders, artists, entertainers, thinkers and others all want to be a part of “Diane’s realm, knowing both her civility and the reach of her show,” Mohn said. “Diane was doing engagement long before engagement was cool, one conversation, one call at a time.”

Rehm said she will continue to work with WAMU in a fundraising capacity. Her replacement is expected to start Jan. 2, 2017, and Rehm is hopeful that WAMU and NPR will lead the way in expanding the political discourse.

Before the event, a long line of well-wishers gathered around the woman of the hour. She hugged some and greeted all warmly.

“She is one of America’s great human beings,” said Christy Brown, a longtime friend whom Rehm met through fundraising efforts for WFPL in Louisville, Ky. “We need to continue to learn from her and with her.”