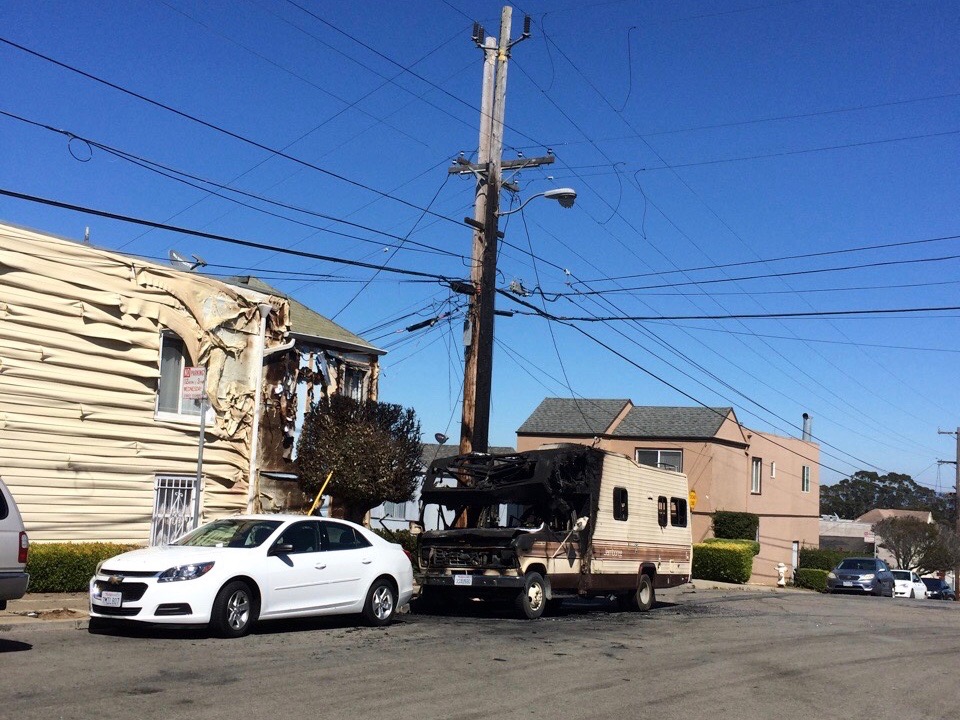 A motor home parked next to a utility pole in KALW's neighborhood caught fire and affected telephone wiring (Photo: KALW)

One unfortunate event after another has befallen this month’s pledge drive at KALW in San Francisco.

Late Saturday morning, a motor home parked next to a utility pole in the station’s neighborhood caught fire, said Annette Bistrup, KALW development director. The fire crawled up the utility pole and affected telephone wiring. No one was hurt, Bistrup said. The San Francisco Fire Department determined that the fire was accidental, according to a spokesperson.

“We noticed not much action was going on in the phone room, and then a little bit later, we realized that this fire had occurred,” Bistrup said.

The fire, which was quickly contained, affected the station’s lines for incoming and outgoing fundraising calls, as well as its office phones.

“It was not a very dramatic fire, but it had a dramatic outcome,” Bistrup said. It rendered a number of local phone lines, including KALW’s, useless for most of the weekend.

“It was not a very dramatic fire, but it had a dramatic outcome” — Annette Bistrup, KALW development director

The station typically uses a call center for overflow phone calls. But due to its old-fashioned phone system, it couldn’t forward calls to the center. “The net effect was that if anybody tried to call, they wouldn’t get through, and they wouldn’t be able to speak to the call center,” Bistrup said.

“It was definitely not good timing,” she said. The station cancelled weekend shifts planned for volunteers.

But thank goodness for the internet. The station typically draws two-thirds of donations through digital platforms. During locally produced music Saturday night, DJs suggested listeners give online instead.

Sunday, however, was unusually slow. Phone lines were restored at 10 p.m., but no volunteers were around to take calls.

The full impact of the outage is unclear, Bistrup said. “You don’t know whether somebody who loves the phone would elect to not do anything at all,” she said. “For one thing, they weren’t able to call us and tell us.”

But, she said, “we can safely say that it slowed us down on Sunday to the tune of some thousands of dollars.”

Days since have also dragged. The station was aiming to reach an ambitious goal of $375,000 during the drive, which started Sept. 13 and is expected to conclude Friday. By Tuesday afternoon, KALW had raised about $206,000.

“We think that’s a tough order to expect to raise $175,000 over the course of Wednesday and Thursday and part of, or all day, Friday,” Bistrup said. “If that happens, we will have never done that before.”

If KALW fails to reach its goal, it may extend the drive or add a direct-mail campaign at the end of the year. It will hold its next on-air drive in May 2017.