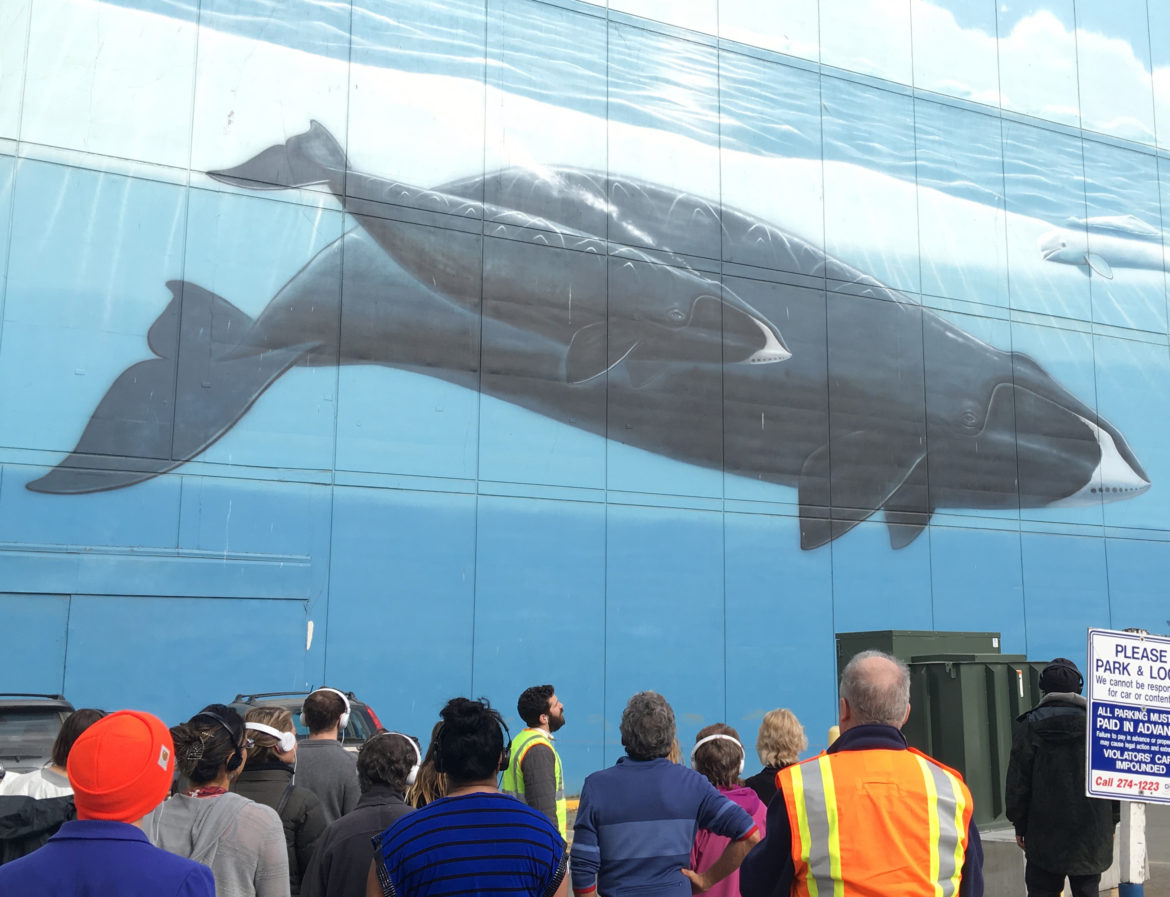 Stories in the Frontier of Change soundwalk were timed to coincide with specific stops in the tour of downtown Anchorage, including a giant mural of whales (Photo: KNBA)

Stories in the Frontier of Change soundwalk were timed to coincide with specific stops in the tour of downtown Anchorage, including a giant mural of whales. (Photo: KNBA)

For the approximately 250 residents of Shaktoolik, Alaska, climate change is not an abstract concept. It’s a reality of daily life that may force a relocation of the village due to rising sea levels and coastal erosion.

That reality, as well as the sense of community that exists in the rural Alaskan village, was an experience that the Localore team for KNBA’s “Frontier of Change” wanted to bring back to Anchorage. The lead producers, Josephine Holtzman and Isaac Kestenbaum, traveled to the remote seaside village, which lies 415 miles northwest of Anchorage on the Norton Sound. There they recorded binaural soundscapes and interviews with locals to be mixed together into an immersive “soundwalk.”

The 30-minute audio production focuses on representing the human experience of climate change. The narrative is structured as a trip to Shaktoolik that starts with the listener’s journey to the village on a four-person bush plane. Upon landing, the listener walks through the mile-long town, stopping at the houses of various residents to hear about how they’ve experienced climate change and what their future there may hold.

Frontier of Change is one of 15 productions backed by Localore: Finding America, a 2015–16 initiative spearheaded by the Association of Independents in Radio to promote diversity and new storytelling models for and with communities that are underserved by public media. Each local project paired at least one independent producer with a local station to create the production and develop a model for sustaining it after the grant ended in July.

“We were trying to think about ways people could … viscerally and physically feel and experience climate change,” said Holtzman. The sound walk is “a way of getting people outside while hearing stories about climate, as opposed to sitting in front of a computer screen or in a dark movie theater.”

The team premiered the soundwalk in May at an event staged at the Anchorage Museum.

In the museum’s lobby, participants checked in at “virtual-reality travel desk,” where they could sign up for a guided tour led by “flight attendants” or complete a self-guided tour. Participants received headphones and texted a number to receive the link to the audio. More than 120 participants completed the walk at the premiere, and the guided tours were fully booked.

“I didn’t know how people would react to this,” confessed Joaqlin Estus, KNBA news director, who led the collaboration. “I was thrilled with how people responded.” Several of the interviews recorded for Frontiers of Change were adapted for broadcast on KNBA.

Climate change “has been covered a lot, but we think being … in motion … out in the natural world hearing these stories can be pretty powerful,” said Kestenbaum. “We experimented with the idea of audio virtual reality, trying to use immersive field recordings and soundscapes from rural villages in Alaska that are so remote and expensive to get to that most people in Anchorage don’t go.”

This northern region of Alaska is as foreign to many residents of Anchorage as it would be to those who live in the Lower 48 states. KNBA’s Frank Chythlook, the operations and production coordinator who also produced content for Frontier of Change, described a deep divide between rural and urban cultures in Alaska. Urban dwellers in Anchorage often see “deficiencies” in life in the villages, he said, and may even take a callous view toward the viability of villages.

“There’s a sense of ‘Why do you live there?’” explained Chythlook. “I would say people in Anchorage generally have very little understanding of the reality of living in rural Alaska.”

‘Storytelling out in the world’

At KNBA, an Anchorage-based station that primarily airs Triple A music, the Localore project aimed to bridge the gap between the two cultures. Koahnic Broadcast Corporation, which produces and distributes national shows such Native America Calling, owns and operates the station.

The soundwalk enabled participants to experience the differences, while finding connections between the rural and urban landscapes. As listeners complete the one-mile circuitous loop through downtown Anchorage, they discover that they have just walked the same distance as the entire village of Shaktoolik.

“Typically in soundwalks and audio tours, what you’re seeing is corresponding to what you’re hearing. This was not that,” explained Holtzman.

Some of the associations between what participants hear from Shaktoolik and see in Anchorage were intentional. For example, a story about whales was timed to correspond with participants arriving at a whale mural in downtown Anchorage. As a schoolteacher describes disaster preparation in the village, listeners approach one of the most luxurious hotels in the city. Other juxtapositions, however, were pure chance.

“It did seem like these folks came away with an understanding that might have been deeper than your average Anchorage person.”

Kestenbaum described unintentional encounters that soundwalk participants shared with him. One observed an elderly person cross the street in Anchorage while listening to a story from a Shaktoolik elder. Others were moved as they listened while watching a rainstorm rolling in during the premiere museum event.

“I heard people say that seeing a dark storm come in almost enhanced the experience because it felt like it was part of the story,” he explained. “Every time you do it, something different could happen.”

Holtzman called the experience “storytelling out in the world,” and described how producing the soundwalk required giving up some control as a storyteller. “There’s a lot of chance, and a lot of interesting things that can happen,” she said. “The storytelling is a little less prescribed, where you can make your own connections and draw your own conclusions.”

In addition to the museum premiere, Frontier of Change produced a community scavenger hunt that brought out 150 people. A screening of Qagruq, an 11-minute film by Joel de Jesus, a KNBA intern who also worked as a producer for Frontier of Change. The film, exploring a traditional whaling festival in Point Hope, Alaska, drew a standing-room-only crowd of 225 people. Estus was “astonished” by the turnout.

“I’m just amazed at the eagerness for the engagement,” Estus said. She attributed the response to growing recognition among Alaskans of the “dramatic impacts from climate change.”

As for the project’s goal of bringing the experiences of life in rural Alaska back to Anchorage, Chythlook described how he saw people’s “eyes light up” as they experienced the sound walk.

“These were all city folks, and it’s hard to tell if we’re preaching to the converted…, or if there was a transformation,” he said. “But it did seem like these folks came away with an understanding that might have been deeper than your average Anchorage person.”

Despite the urban/rural cultural divide in Alaska, people across the state are being affected by climate change. “What people outside of Alaska don’t realize is that climate change is affecting the Arctic much more dramatically than other parts of the planet,” explained Estus.

KNBA’s Localore grant ended this summer, but the station is looking for ways to keep the project going. Feature segments that were broadcast on KNBA are being edited into evergreen pieces and offered to other Alaska pubcasters and tribal stations throughout the country, according to Estus.

Frontier of Change has also paired with the Alaska Teen Media Institute to interview people who are being affected by climate change at the next month’s First Alaskans Institute annual Elders & Youth Conference. Also next month, the Shaktoolik soundwalk will be installed in Portland, Maine, to coincide with a meeting of senior officials of the Arctic Council.

With the additional interviews, KNBA intends to create first-person narratives for broadcast, according to Estus.  The station also plans to continue holding “fun, interactive events that will connect people in urban areas to the reality of life in rural Alaska,” she said, and hopes to be able to involve Holtzman and Kestenbaum.

Casey Freeman is a researcher and filmmaker based in Washington, D.C., and a master’s of fine arts candidate in Film and Electronic Media at American University.