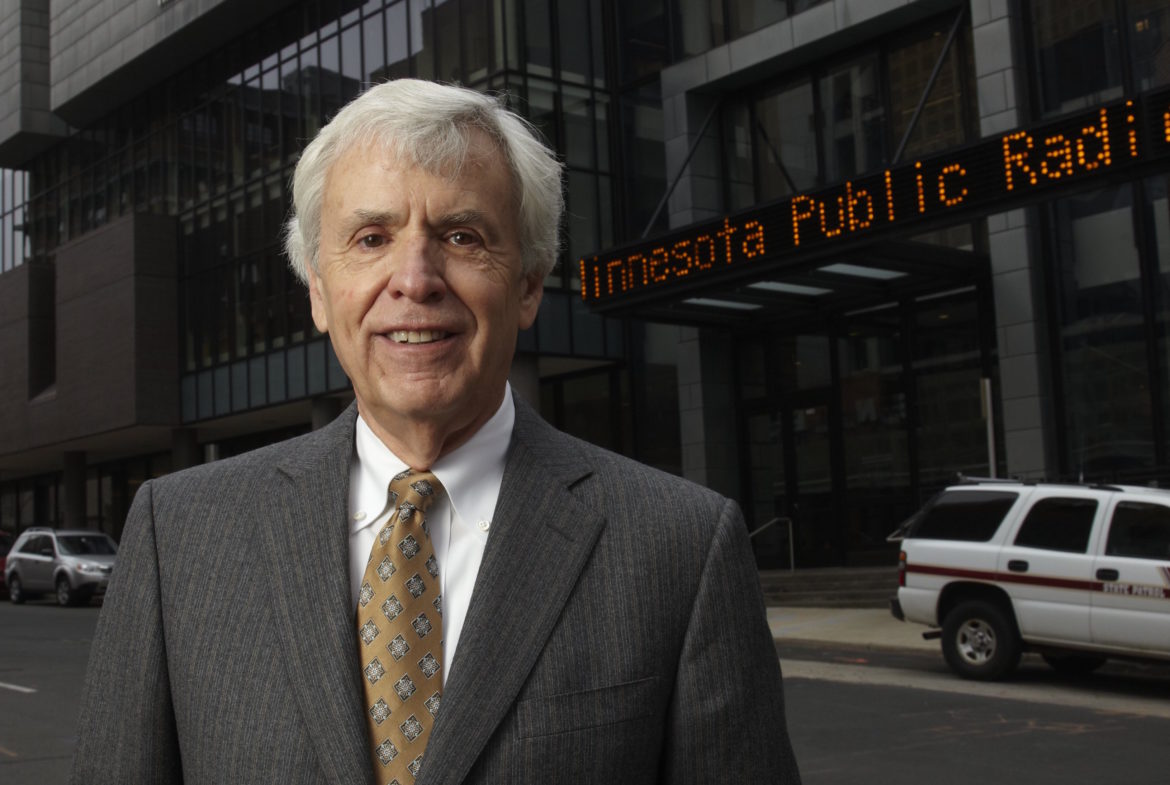 Kling outside of Minnesota Public Radio headquarters in Minneapolis.

Ask Bill Kling about the most important project he’s working on right now, and he gives an answer you might expect from a retired man.

“Skiing and hiking,” the founder of Minnesota Public Radio, Public Radio International and American Public Media recently told Current by phone. He’s also been working on another typical retirement project: spending more time with his grandkids and taking them on college visits.

But while Kling, who was also one of the founding board members of NPR, spends more time in Aspen, Colo., in his retirement he continues to think about public media and its future.

Current checked in with Kling, 74, after Ann Alquist, chief progress officer at Rhode Island Public Radio, asked us “What happened to Bill Kling?” She submitted the question through our Currently Curious project.

“I find him to be a fascinating character, both ruthless and visionary,” she told Current in an email. “… Someone should write a biography of him.”

When Current asked Alquist to elaborate on her description of Kling as “ruthless,” she said, “I used to work at KFAI in Minneapolis. Kling took us to court to get us off the air.”

Kling recalled the episode as an “old story” that has become “exaggerated and somewhat mythical” over time. MPR didn’t take KFAI to court, he said, but challenged the community broadcaster’s proposed frequency allocation at the FCC. The channel assignment would have disrupted an off-air relay signal between MPR’s production facility and its primary station in Minneapolis/St. Paul.

This was an engineering challenge that preceded satellite technology, Kling said. At that time MPR was “tiny and fragile. So one could say we aggressively protected our network.”

In addition to building a statewide network of MPR stations and creating national program distributors to compete with NPR, Kling is known for developing partnerships between MPR and private companies, which were controversial but also helped bolster MPR’s endowment. He is also credited for hiring Garrison Keillor and bringing his voice to public radio. Kling got his start in radio in 1967 at KSJR-FM, which at the time was owned by St. John’s University in Collegeville, Minn.

Kling, standing far right, with the founding board of National Public Radio in 1970. (Photo courtesy of Kling)

Kling retired in 2011 but still holds the title of APM president emeritus. He keeps a flexible schedule, some weeks equivalent to full-time hours and others not at all. Only he and his assistant work in his downtown Minneapolis office.

“Bill is a big listener to our regional and national programming, a super-user of our digital services, a trusted confidante and advisor who sees trends and opportunities for new public service in places most people miss,” said Jon McTaggart, Kling’s successor as c.e.o. of American Public Media Group. “His imagination for the future of public media and his passion for our public service have not changed, even in retirement.”

Kling likes being president emeritus, he said, because “nobody can tell you exactly what it means, and you have free rein to do what you want and no obligations to do anything that you don’t want. So I like that a lot.”

He advises APM “as requested.” “They’re headquartered in downtown St. Paul,” he said. “So I’m not hovering over anybody, but I’m around in case there’s something useful that they want me to do.” He has spent time making connections with potential public radio funders, attending events like Garrison Keillor’s final live shows, and sorting and organizing his files to preserve any that might have historic value. The files could be helpful for understanding “what worked, what didn’t, why and what lessons are in those files that we may have forgotten,” he said.

He also has a role in strategy discussions for MPR and Southern California Public Radio, which operates KPCC in Los Angeles, and will participate in strategy retreats for those entities. And he looks for ways to connect content producers with content distributors. For example, he suggested MPR air sessions from the Aspen Ideas Festival, which it did.

Kling ran into gridlock with a project at the beginning of his retirement: an effort to add 100 reporters per station at major-market public radio stations, including MPR, KPCC, WNYC in New York and WBEZ in Chicago.

“The group didn’t work very well together, as is often the case in public radio,” Kling said.  Several of the largest foundations in the country were “very excited” about the proposal, which would have required a significant investment. “And one by one, as we were getting ourselves to work together, they changed their priorities, so the funding pretty much disappeared.”

Kling said he has no plans to try to rejuvenate the project.

“Unfortunately, [public radio] came from nothing; we came from nowhere. … It’s kind of like going through the Depression and then being risk-averse to anything after that.”

The former APMG c.e.o. still enjoys discussing public radio’s future. He’s not sure whether podcasts are as game-changing as many people believe, but he thinks podcast-versus-broadcast discussions about distribution platforms miss the point.

“… [T]here’s an awful lot of emphasis on how things should be distributed, and it’s important to do that,” he said. But he added, “We have to make our mark in public radio on what we’re broadcasting, more than how we’re broadcasting it.”

He also listens to public radio and doesn’t always like what he hears. “Too many of our stations are still amateurish,” he said.

On one station he listened to recently, the DJ “had to be high on something,” he said. “[H]e mumbled something about what he was going to play. It was indecipherable, and then there was 30 seconds of dead air.”

And while he says that’s an extreme example — and some stations are seeing big gains in audience — he believes that local stations collectively need to do more to improve.

“NPR can refine itself until it’s perfection,” he said. “But if [stations aren’t] equally strong and equally professional, then they’re going to keep NPR and keep public radio from being the success that it could be and should be and needs to be.”

“Unfortunately, [public radio] came from nothing; we came from nowhere,” he added. “It’s taken a complete generation to turn over those 1960s and ’70s staffers who were great people but were used to working with nothing. And it’s kind of like going through the Depression and then being risk-averse to anything after that.”

To get better, stations could focus more on board development, something that Kling has spent a lot of time on during his career. The right board members “can open doors, find money and give money, and they can come up with ideas of moving forward faster than they would otherwise do,” he said. “A great deal of the success at Minnesota Public Radio was due to the strength of its board.”

But some stations “pride themselves on having a weak board,” Kling said. A major-market station manager told Kling that their station lacks a strong board so the manager “can do what I want.”

“The trouble with that is as soon as there’s a problem in a station, and you have a weak board, they will turn on you, because they don’t want to be blamed for it and they don’t know how to get out of it,” Kling said. “And so the manager’s at risk and sometimes gets fired in the process. A strong board works with a strong c.e.o. and says, ‘We have a problem, we’re going to fix it, and here’s what I can do to help, and here’s where I can get someone else to help.’”

Submit your own question to Currently Curious in the form below. It could be investigated in a future Current story.