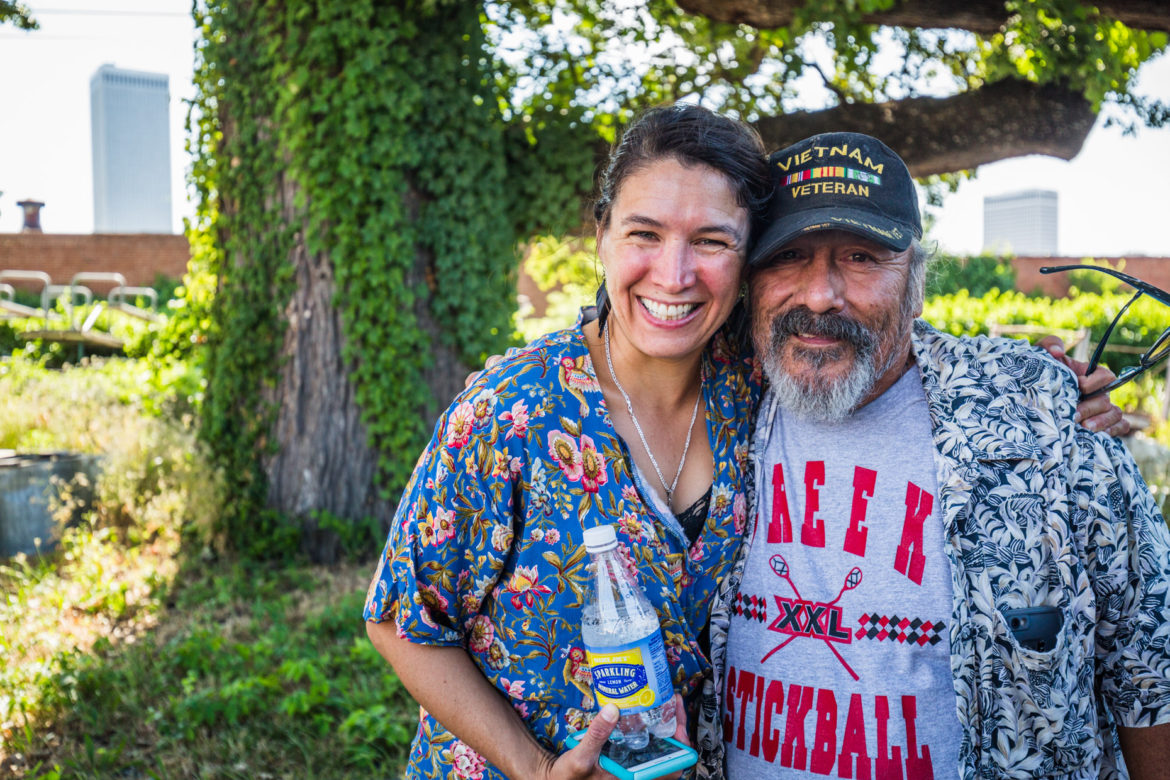 Where are all the Native Americans?

That’s the question that a job candidate at KOSU in Oklahoma City asked Rachel Hubbard, associate director and g.m., as the two drove around town a couple of years ago.

The prospective staffer’s question wasn’t surprising; Oklahoma is known for its Native heritage. However, “you can see vibrant communities of Vietnamese, Latin Americans, African Americans,” Hubbard said, “but we don’t have reservations in the way people understand them. There’s no visible tribal community.”

Though Oklahoma is home to members of 39 federally recognized tribes, there’s little evidence of their presence within the city. Hubbard had noticed that absence as well, and it nagged at her. Plenty of people walking down the street could identify themselves as Native Americans, she said, but there was no outward way to tell. So KOSU simply didn’t cover the Native community.

Approaching Native issues can be daunting to non-Native journalists, said Shannon Shaw Duty, editor of the tribal publication Osage News. “Tribes are complex. They have their own constitutions. Many have three-branch governments, tribal courts, health facilities and gaming institutions bringing in thousands or millions of dollars,” she said.

Since then Herrera has covered topics including Native ancestry research, a fight over rights to culturally sacred water sources, a Native sketch comedy troupe and unique challenges for Native military veterans.

Last month she also organized a community bike ride exploring Native history in Tulsa. Guides at stops along the route discussed the cultural significance of the Council Oak Tree and cottages in the Maple Ridge neighborhood. Nearly 70 riders turned out in 90-degree weather. The guides’ presentations were recorded and released as a podcast so other cyclists can ride and learn from the route.

Hubbard said she’d like to continue, and deepen, the Native coverage. Pledge volunteers “heard quite a bit about it” during the two fundraising drives since November. “Pledges came in specifically because of the project,” she said.

The challenge, as usual, is funding. “Oklahoma is in a serious budget crisis, so we have to be really creative,” she said. Hubbard is starting talks with Native news organizations about a content-sharing plan.

‘Different sense of what it means to be Native’

KOSU broadcasts NPR news and talk programming and Triple A music from the campus of licensee Oklahoma State University in Stillwater, and has studios in Oklahoma City. Its signals cover most of central and northeastern Oklahoma.

Despite this reach far beyond the state capital, the station “has never figured out a way as public media in Oklahoma to effectively cover the tribes,” Hubbard said.

Although born in Virginia, Hubbard grew up in Oklahoma and considers herself “Oklahoma-bred.” She started at KOSU in 1999 as a student reporter and worked her way up to state capital reporter and news director. Hubbard continues to direct the newsroom as associate director.

After hearing about AIR’s new Localore initiative, she thought it would a “great way to figure out how to pilot Native coverage,” led by a producer with experience in the reporting niche.

Minneapolis-based Herrera is a veteran producer who has worked at several public media stations in the state, including Twin Cities Public Television, community radio KFAI and KSMQ-TV in Austin.

She’s also fascinated by Native culture, and produced a series on cultural and language preservation for KBFT Radio on the Bois Forte Band of Chippewa reservation in northern Minnesota. She’s finishing up a documentary about an Ojibwe artist.

“In Minnesota there are distinct reservations,” Herrera said. “In Oklahoma there’s a different sense of what it means to be native. We talk about ‘urban Indians,’ and that’s kind of what it’s like.” Tribe members now blend into other cultures in cities, such as in Tulsa, where Creek Indians live within a large Mexican community.

Herrera and Hubbard wanted to “break down stereotypes” with Invisible Nations reporting, the producer said. Although issues like poverty and poor health within Native communities remain, other topics also receive scant attention.

“We didn’t want to focus on hard news,” Hubbard said, “but rather, how is Native history informing our modern culture? What are the influences that we don’t see,” beyond Indian names of streets and cities?

Members of many tribal communities in Oklahoma gather wild onions, or tafvmpvce, from February through April for special harvest dinners. A video produced by Mvskoke Media for KOSU’s Invisible Nations explains the tradition. (Image: KOSU)

One of the first stories Herrera reported looked at challenges faced by Native journalists, who, because they live under sovereign Indian nation laws, aren’t guaranteed free-press rights. “That exemplifies the reporting we wanted to do,” Herrera said.

Reporting such stories can present unique challenges for non-Native reporters, said Shirley Sneve, a Rosebud Sioux and executive director of Vision Maker Media, which represents Native producers in public broadcasting’s National Minority Consortia. “There’s a distrust that a lot of Natives have of outside media,” she said, which dates back for generations.

Commonly accepted journalism guidelines often don’t apply. For instance, most reporters will decline meals offered by a source. But when interviewing a Native source, Hubbard said, “they may want you to come to their barbecue or take you out for a piece of pie. And they’ll be insistent that you eat the food or that they pay for the food. As I told Allison and other reporters, ‘Eat the pie,’” because declining it could be seen as an insult.

Another way to gain access and build trust is to work with Native producers. The wild onion report featured a short film from Mvskoke Media, which documents Creek tribal culture. Herrera also has teamed up with Fire Thief Productions, an Indian-owned video production company in Tulsa, for four short Invisible Nations films.

Non-Native journalists often “don’t have the connections and cultural understanding” necessary to go beyond surface reporting, said Jessi McEver, Cherokee and Creek, a project manager for Fire Thief. Because several tribes are represented within the company’s production team, someone is likely to have those connections, she said.

McEver credited Herrera for getting to know her sources. “She spent time with them before jumping in and putting a camera in their faces,” McEver said. “She made herself available to the people she covered.”

About 70 cyclists turned out in 90-degree heat for KOSU’s tour of Native sites. (Photo: Shane Brown)

As Herrera became acclimated, she discovered hidden history sites in Tulsa, places that Hubbard had driven by for years without knowing their significance. The two decided a community bike tour would be the best way to bring those to the forefront.

Herrera spent several months interviewing locals and selecting sites to highlight “to capture the arc of the city’s progress both in boom times and going back to its Creek origins.”

During the weekend of the “From Creek Town to Tulsa Town” event, the nonprofit cycling organization Tulsa Hub offered bikes for use by out-of-town visitors. A cultural preservation officer, a singer, a parks representative and an historic preservationist spoke at stops along the way. As they learned about Tulsa’s Native history, riders also got drinks and snacks.

Hubbard was pleased with the turnout. “This whole project has been a beautiful way to extend collaborations,” she said, “not just with an independent producer but with communities that had been just out of our reach for a long time.”

Correction: Due to an editing error, an earlier version of this post referred to the Maple Leaf neighborhood. It is Maple Ridge.