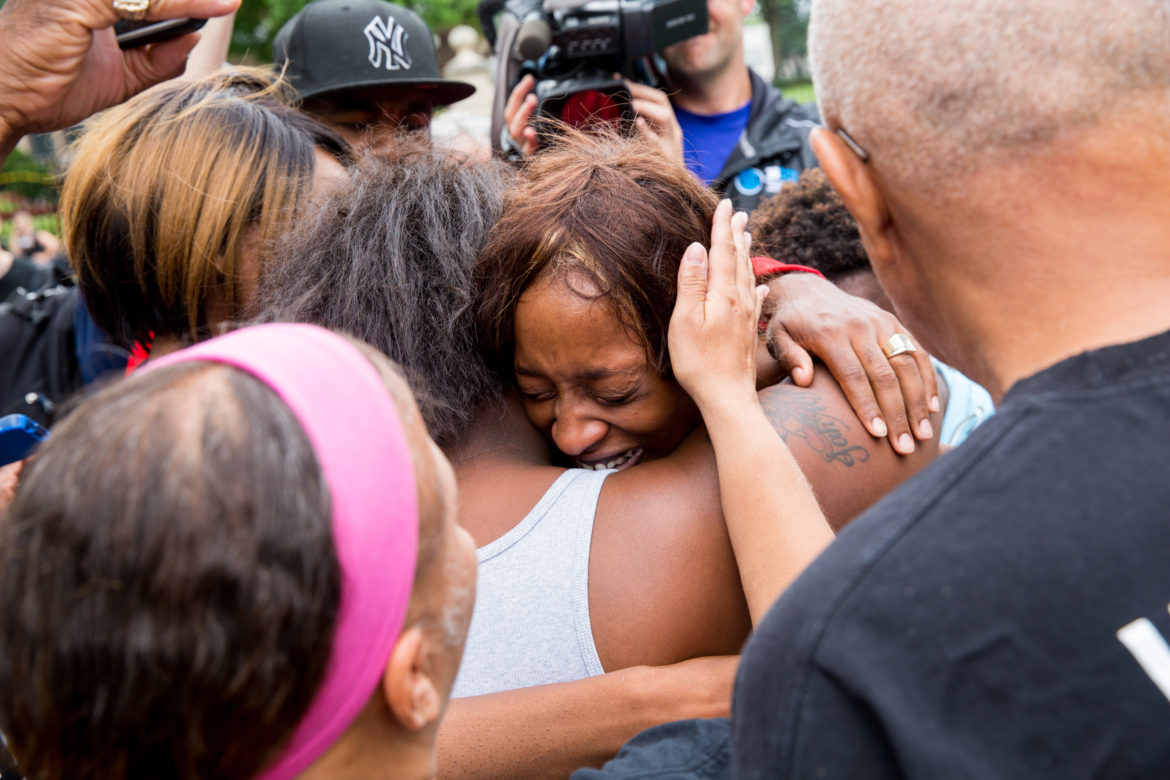 Diamond Reynolds is consoled by friends and supporters after arriving at the governor's mansion in St. Paul, Minn. the morning of July 7, 2016. Later in the day Governor Mark Dayton would go on to compliment her for the poise and self control she showed when taking a video after Philando Castile had been shot. (Evan Frost | MPR News)

Friends and supporters console Diamond Reynolds after she arrives at the governor’s mansion in St. Paul, Minn., the morning of July 7. The day before, her boyfriend Philando Castile was shot and killed by a police officer. (Photo: Evan Frost, MPR News)

Police shootings of black men once again have journalists and station leaders considering how public media can best deliver ongoing coverage of such violent, racially charged incidents and the protests that follow.

In Louisiana and Minnesota, states where two black men died after interactions with police July 5 and 6, stations are taking varied approaches based on staff and resources. Meanwhile, journalists at stations that have covered previous incidents, such as those in Baltimore and St. Louis, can offer guidance on covering the underlying systemic issues.

“The fact is that these big stories of national consequence begin as breaking news stories,” said Mike Edgerly, executive editor for Minnesota Public Radio News. “… I think our real contribution to the national and to state discussion is in how we convene our audiences to discuss what’s going on, to reach out and bring context and depth to the reporting that other media may not be able to do.”

After police shot and killed Alton Sterling in Baton Rouge, La., July 5, video of the incident spread on social media the next day as national media parachuted into the city. Local public radio station WRKF didn’t post anything on its website until Wednesday afternoon.

Reporter Sue Lincoln said she was too busy fielding phone calls from NPR and Here & Now and that the station was covering press conferences about the shooting. She has focused her regular segment, which usually covers state politics, on the shooting.

“I am literally the only person in the newsroom,” she said July 6. “I’m just trying to keep my head above water.”

Since that interview, WRKF has covered the resources available to grieving families like Sterling’s and protests in Louisiana’s capital. WRKF is also coordinating and sharing resources with WWNO in New Orleans. The two stations already share content on coastal land loss and the state legislature.

WWNO is covering the Sterling shooting “because of our community’s own persistent criminal justice issues,” Eve Troeh, WWNO news director, said in an email. “While we have not had a police shooting like that of Alton Sterling, we have a police force that has seen scandals, coverups and misconduct in the past.”

Troeh said both WWNO and WRKF are small stations, but at the moment, WWNO has a larger news staff and is trying to be sensitive to WRKF’s challenges and strengths. As news continued to develop, WWNO sent reporter Ryan Kailath to Baton Rouge.

Kailath was arrested during a protest Saturday in Baton Rouge and released the next day. Another station reporter, Tegan Wendland, worked to get him released. Kailath and a contract reporter, Jesse Hardman, have filed updates with NPR’s newsmagazines and newscast unit. Digital director Jason Saul has also taken photos and filed for the station’s website and social media, Troeh said.

Troeh wishes that WWNO or WRKF had a daily newsmagazine for which they could have lined up guests to dive into the issues. “We must find a way for public radio to better cover criminal justice issues in this, the most incarcerated state in the nation,” Troeh said.

She points to WWNO’s multiplatform community-based Finding America project, “Unprisoned: Stories from the System,” as an example of solid news reporting combined with deep, community-based listening. “We need to tell our audience the news and explore the long-term fault lines behind the news,” Troeh said. “Neither alone is enough.”

Meanwhile, Minnesota Public Radio has devoted anywhere from half to all of its newsroom of 70 to covering the aftermath of the July 6 shooting of Philando Castile in Falcon Heights, Minn. Castile was shot in the arm by a police officer several times during a traffic stop. His girlfriend streamed the aftermath live on Facebook.

MPR reporter Tom Scheck lives near the shooting. “He had just put his kid to bed, ran out the door and was on the scene,” said MPR’s Edgerly.

Hours later, about 16 MPR reporters were in the field, with another 16 editors and producers working on the story behind the scenes. A protest on the night of July 9 closed a major thoroughfare in St. Paul, with about 100 protesters arrested and 21 police officers injured. MPR News digital and broadcast teams worked nearly around the clock to produce coverage, Edgerly said.

Having a mature newsroom with inroads into ethnic communities helps. Plus, the station is practiced at covering police shootings, Edgerly said.

“I can’t overstate, especially for other news operations, [that] you need good senior-level people who know their communities, and you can do justice to this story,” Edgerly said.

Keeping a spotlight on race and justice

Last year the site of unrest was Baltimore, where Freddie Gray was arrested and died in police custody. Shortly after Gray’s death, Mary Rose Madden, a senior news producer and reporter with the city’s WYPR, began a yearlong exploration of the culture of policing and the relationship between police and citizens. Through a special series called On The Watch, she’s reported on police who felt unprepared and attacked after last year’s unrest, as well as citizens who say police are abusive.

“You look at the situation from as many points of view as you can and try to talk to as many people as you can,” Madden said.

In San Francisco the 2009 death of Oscar Grant was one of the first police shootings of unarmed black men to be caught on video. As it captured national attention, KQED similarly began to examine law enforcement’s role and its relationship with communities of color, said Holly Kernan, executive editor of news.

“In my house, the only thing that’s being discussed is the murders of black men by police officers.”

Following more recent events, a new reporting team is covering the criminal justice beat and its intersection with racial disparities. The station is also focused on programming and reporting on evolving attitudes about race and identity, such as in its podcast Truth Be Told. “We find that people are more open to talking about this, largely thanks to movements like Black Lives Matter pushing the conversation on race and justice forward,” Kernan said.

When Ferguson, Mo., became the center of national media attention in 2014, St. Louis Public Radio saw an opportunity to clear up misconceptions. National media often conflated Ferguson with St. Louis, but it’s a municipality in a larger complicated regional system. Yet station journalists say Ferguson faces challenges that are similar to those of St. Louis, Baltimore and Chicago. The station launched We Live Here, a multimedia project that explores “race, class, power, poverty, systems and the people they touch.”

Reporters Kameel Stanley and Tim Lloyd say they pursue issues that draw together policy, hearts and minds. They often approach each show by trying to answer a simple, fundamental question that can lead to multilayered answers, they said.

More than a year into the project, they said, their work in part spurred the St. Louis Public School district to ban early-grade school suspension. In the project’s second season, the team has partnered with other public media, hosted live storytelling events and boosted engagement with listeners.

“If we’re producing this type of content, we want to be in the conversation,” Stanley said.

What role do public media play?

For people of color like James Muhammad, president of Lakeshore Public Media in Merrillville, Ind., the recent events are both a professional and personal concern, although his peers don’t always give the issue as much weight as he does.

On July 7, the day after Castile’s shooting, Muhammad tuned into another NPR Morning Edition broadcast that covered a wide range of topics. “But in my house, the only thing that’s being discussed is the murders of black men by police officers,” he said. “That’s it.”

Muhammad worries about his 18-year-old son, who is entering his first year of college and assumes the best in people, “which is fine, it’s just that one time you’re wrong.” The family lives in a not-so-diverse Indiana suburb, and while neither Muhammad nor his son have ever encountered any trouble, he can’t help but worry. What if his son encounters a police officer who’s having a bad day? What if his son’s tone or posture triggers something in the officer that makes him nervous? No one wakes up in the morning with the thought of taking someone’s life, so what’s going on? Why do these police shootings keep happening?

African-Americans bring these concerns with them to work. “And that’s going to be showing up in workplaces and just makes everything more complicated,” Muhammad said. “For public media, what should be our role in that? What resources should we be giving local stations to address this? To talk about this?” Public media can provide diverse programming and facilitate conversations about these issues, Muhammad said.

For some, the police shootings underscore the importance of employees at public media stations reflecting the communities they cover. The system needs to hire and retain more people of color, said Marita Rivero, former v.p. for radio and TV at WGBH in Boston. She noted that when covering Ferguson, public broadcasting news outlets reported on the largely white composition of the city’s police force and that it had been cited by the U.S. Justice Department for racial bias.

“What we need to be careful of is that we look at ourselves and make sure we don’t look like that white police department,” Rivero said, adding that public media should listen to and reflect its community and avoid fostering an insider culture.