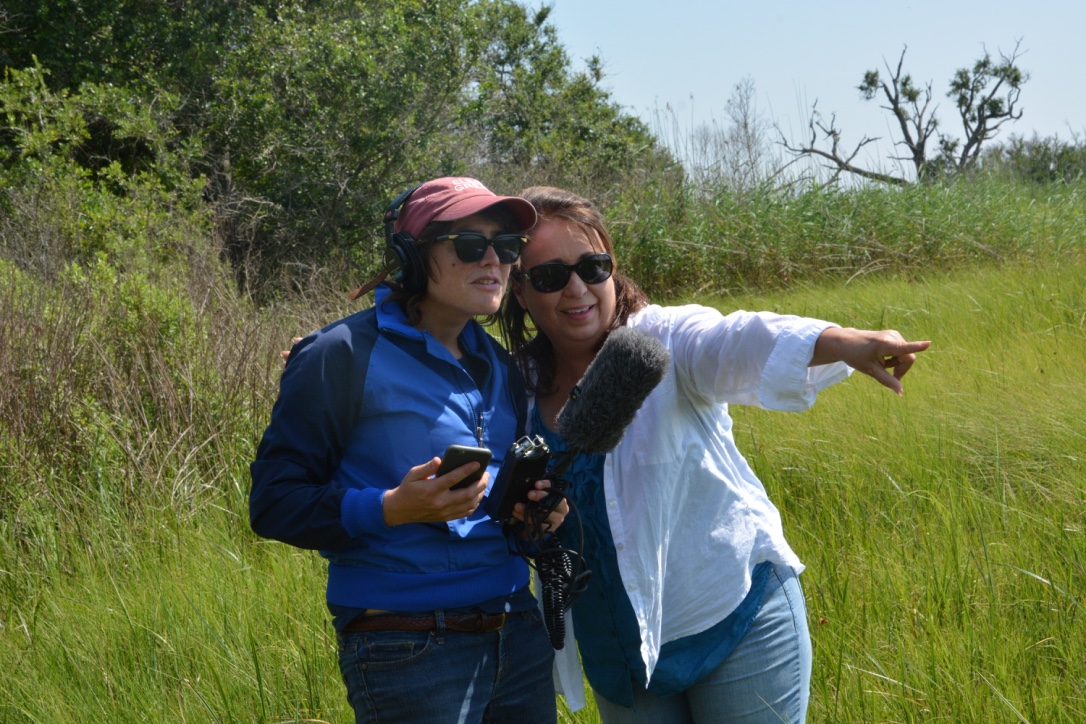 Laine Kaplan-Levenson, the host and producer of WWNO podcast TriPod, and Louisiana resident Cathy Goutierrez look for the burial grounds of Goutierrez’s family in Hopedale, La.

Things I did not know until recently:

— In Louisiana, there was a community of runaway slaves called Maroons who escaped to the swamps and forests, where they lived for years in caves and hollowed-out trees.

— There is hip-hop in West Virginia.

Each of these nuggets came to me from a public radio podcast. They tap-danced across my eardrums and lodged themselves in my gray matter. And I’m grateful because I love me some trivia. Did you know that no residential building in Washington, D.C., is more than 12 stories tall? You do now!

But this isn’t about my interest in trivia. Rather, it’s about the intersection of two of my great passions — public radio and podcasts. Which makes sense, since I’m the host of a public radio show all about podcasts.

I spend much of my working week listening to podcasts, talking to people about their podcasts, trying to download podcasts but lacking sufficient space on my iPhone, etc. So I know a thing or two about this hustle.

And one thing I know beyond a shadow of a doubt is that podcasts are good for public radio. In fact, they’re great. According to Podtrac’s April 2016 industry rankings, the top three podcast producers were NPR, This American Life/Serial (birthed at WBEZ) and WNYC Studios. Those three alone captured more than 100 million unique downloads. That’s a lot of listens.

Meanwhile, a Pew Research Center State of the News Media 2015 report found that NPR’s podcast underwriting doubled from FY13 to FY14. And in just the first five months of FY15, the network’s podcast revenue had already exceeded that the previous year’s.

Yes, most of these numbers relate to the NPR mothership. But my gut, trustworthy as it is, tells me that beyond the figures, public radio podcasts are extremely valuable. They are one of the best ways to reach new audiences and to convince existing audiences that you’re investing in your community and fulfilling your mission. Podcasts are a vehicle to own your market in a way that TV and print media can’t. Though they’ll probably have podcasts soon, if they don’t already. And so will your neighbor. And your mom.

Podcasts help you tell the vital story of your unique little patch of dirt. And every single public radio outlet should be making them. Now.

Real-world evidence, or my love for WWNO

Recently The Big Listen, the broadcast about podcasts that I host on WAMU in Washington, D.C., took a little audio road trip and profiled some of the most interesting public radio podcasts we could find. We chatted with the good folks at West Virginia Public Broadcasting’s Inside Appalachia, WWNO’s TriPod: New Orleans at 300, and Range: Stories from the New American West (while not technically attached to a pubradio station, the show’s hosts both work in public radio).

I also listened to The Modern West from Wyoming Public Media and The Intersection from KALW in San Francisco, but they didn’t make it into the episode, sadly. Next time.

Listening to each podcast gave me a warm fuzzy. The shows so completely represented where they were made, from the guests to the sound design to the tone of the writing. You could feel the strong sense of place in each show. Together, they made an audio crazy quilt of America. And it was inspiring.

After my producer Jacob Fenston and I put that episode to bed, my head was full of questions — How can WE own our market through local podcasts? What kinds of stories are we uniquely positioned to tell in podcast form? Who will give me the money to make all the D.C.-related podcasts I want to make?!

Podcasts are a vehicle to own your market in a way that TV and print media can’t. Though they’ll probably have podcasts soon, if they don’t already. And so will your neighbor. And your mom.

Speaking of money, this brings me to one of my favorite public radio stations that could. WWNO in New Orleans isn’t exactly rolling in it, unless the whole staff is out busking on Bourbon Street every weekend. Yet despite not being a huge financial player in the public radio sphere, WWNO has managed to make two of the most compelling regional podcasts around — The Katrina Debris and the aforementioned TriPod.

But these podcasts don’t just appeal to a local audience. They aren’t about the minutiae of city government or the vagaries of the charter-school system. They are about big topics like history, race and the environment, all viewed through the lens of one of the most magical cities in these united states. You don’t have to know anything about New Orleans to be totally engrossed in WWNO’s whip-smart storytelling.

Theirs is an example of dominating their own region’s stories. Under the direction of Eve Troeh, the station began its 10th-anniversary coverage of Hurricane Katrina far in advance of the national media throng that would surely descend on the city. They dug in, found traction and produced stories that few national outlets would ever land. And their download numbers for The Katrina Debris reflected their efforts. People beyond their market were listening. (Read more about that here.)

In late 2015, with The Katrina Debris’ success in its rearview window, WWNO dropped TriPod, a history podcast celebrating New Orleans’ tricentennial in 2018. Again, WWNO anticipated major national and international interest in the anniversary and set out to own the city’s story way in advance of the Big Easy’s big birthday. That means show host Laine Kaplan-Levenson has to make three years of stories spanning 300 years of history. No big deal.

While the WWNO projects could be repurposed for the airwaves (and often are for maximum bump), they are best suited to the podcast medium. The stories they’re telling aren’t news and shouldn’t be crammed down a newshole. But they are no less valuable for listeners. Not everything needs to be news!

All of the podcasts I’ve name-checked here share some chromosomal elements that make public radio great — depth, curiosity and rock-solid storytelling, to name a few. They’re not chained to a clock or beholden to public radio convention, voice or mode. The platform is built for experimentation — clever sound design, new narrative forms and interactivity. Really, the sky’s the limit, as hackneyed as that may be.

No doubt you have very creative producers working in your newsrooms who are eager to play. And for my money, public radio could do with a little more playing.

Now, not every market is as sexy as New Orleans. And that’s OK. But every market has something that sets them apart from the fray — food, music, industry, art, architecture, nature, literature that is unique to a place.

Who is going to make these sound-rich, story-driven podcasts about these places? Gimlet? Radiotopia? Audible Originals? Nope. Why? They’re not really interested in local. And understandably so. They’re making audio for a global audience.

Now, a newspaper might dabble. An indie producer could dip a toe in. But they generally lack the heft, the production resources and the institutional knowledge of a public radio station. (P.S. — I love newspapers and indie producers!)

Heck, I might just do that. At my own shop, we’re by no means where we’d like to be in terms of podcasts. We have the same constraints as the rest of public radio — staffing, funding, the beastly broadcast clock that needs to be fed. But we’re fixing our sights and doing lots of scheming. And you can, too!

I can’t wait to hear it. And if you need some moral support, I’m here for you.

Lauren Ober is the host of The Big Listen from WAMU 88.5. She lives in Washington, D.C. with her ex-stray dog, Riff Raff.

Correction: A caption on an earlier version of this article misidentified where the photo of Laine Kaplan-Levenson and Cathy Goutierrez was taken. They were in Hopedale, La.