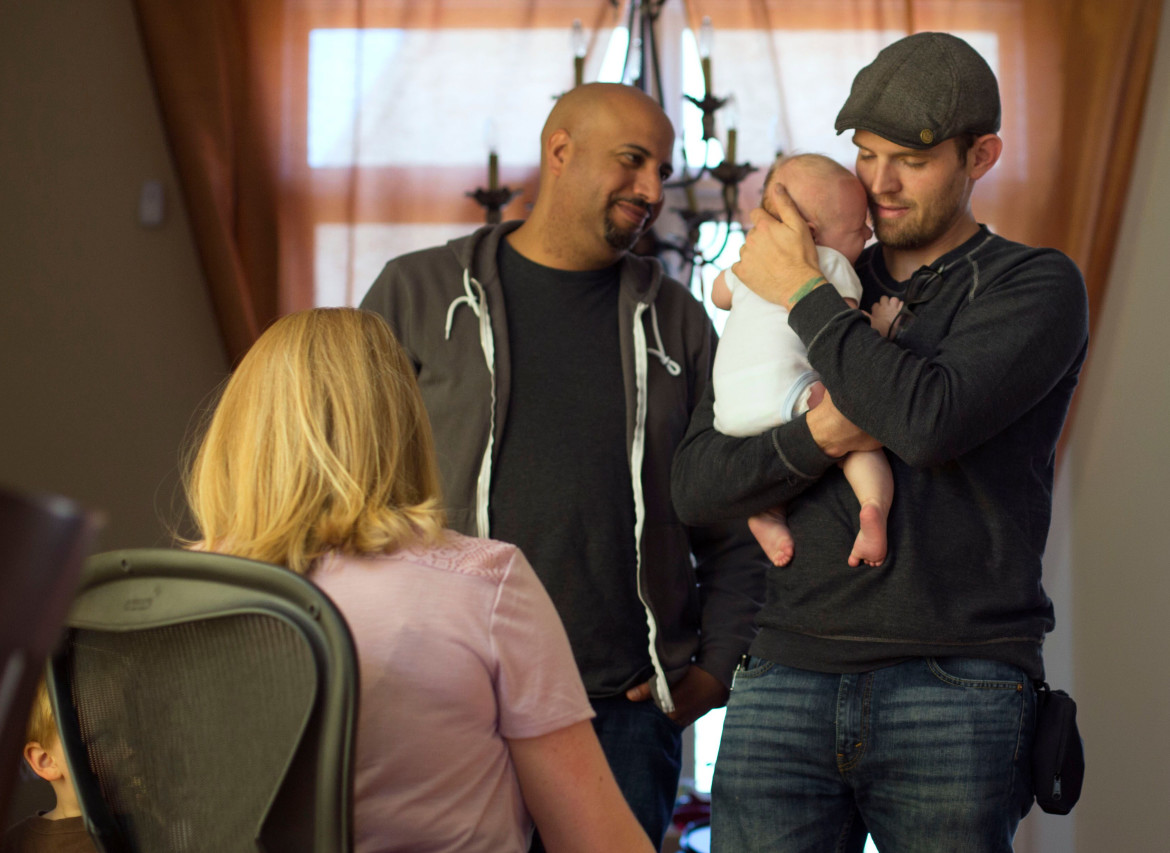 The latest phase of a public media project focusing on veterans is giving civilians and military alums a chance to better understand one another while experimenting with new approaches to public media engagement.

A four-person production team of veterans and content creators is traveling nationwide to at least 11 stations through June for the CPB-backed Veterans Coming Home initiative. They’re talking with vets, filming town-hall meetings, meeting with local veterans’ organizations and updating social media about what they’ve learned.

The initial phase of VCH, which kicked off in 2014, helped public stations connect with community partners to facilitate veterans’ transitions to civilian life.

“Through that work we found that many veterans were having a hard time transitioning,” said Stephanie Aaronson, CPB v.p. of education and community impact. “This takes it one step further: Why is that happening? Storytelling can break down that divide so both sides can better understand the struggle.”

Now the production team is working to bridge the communication gap between members of the military and civilians who may be misinformed by stereotypes of macho G.I. Joes.

“Veterans are often seen as either a hero or a head case and nothing in between,” said Dez Hernandez, project manager and line producer. “This is about breaking away from those labels. It’s about approaching someone as a person first.”

“With less than 1 percent of Americans having ever served in the military, it is far too easy to rely on the media for your image of what it means to be a veteran and to serve,” said Will Pedigo, a producer and director at participating station Nashville Public Television. “We are not doing our job if we continue to perpetuate stereotypes.”

Veterans Coming Home also explores the meaning of service. “When you hear that word, you usually think military,” said Garrett Combs, a U.S. Army veteran on the production team. “But others serve in their community in significant ways as well, sometimes for their entire lives, making that community a better place.”

Values that inspire military service often lead veterans to community service, said Malcolm Brett of Wisconsin Public Television, which has been engaging on veterans’ issues for 15 years. “That reflex toward service stays with them, and they find additional outlets when they’re home.”

The interactions, conversations and experiences of VCH’s traveling production team will feed into a digital-first weekly series to be released from Memorial Day through July Fourth. The web videos will appear on PBS.org as part of its Stories of Service project, as well as on other partner websites. The World Channel, a multicast service carried by 72 licensees, will broadcast VCH content this fall.

In announcing the second phase of VCH, CPB President Pat Harrison noted that the initiative will help stations reach new audiences, such as a younger generation of veterans, “and offer an unprecedented opportunity for participation in an important national dialogue.”

CPB selected filmmaker Danny Alpert as executive producer; his Chicago-based Kindling Group conceived and is producing the media created from the team’s travels. Whitney Dow is story producer, working with the national team on content.

Alpert and Dow have both produced films for public television. Kindling’s 2010 documentary The Calling, presented on PBS by Independent Lens, followed Muslim, Catholic, Evangelical Christian and Jewish seminarians. Dow, a New York–based filmmaker, co-directed Two Towns of Jasper, a 2003 POV documentary about a racially motivated murder. His latest work includes The Whiteness Project, an online investigation into white Americans’ experience of their racial identity. That was presented as part of POV’s “Interactive Documentaries.”

“Both my and Danny’s work is driven by questions,” Dow said.

“We are pushing people to talk about things, to react and think differently,” Alpert said.

The two see VCH as a unique opportunity to spark interactions between participants as well as to develop media in a different way.

After producing a documentary, “I get to feeling like I’m stuck in an echo chamber, speaking to people who already agree with me,” Dow said. “When Danny approached me about this project, it presented two things I’m really interested in: what happens when military service is disconnected from many Americans, and new ways of building public media content that can drive conversations out of that echo chamber.”

Interactions between veterans and the American citizens they serve are shaping the content, rather than the producer-driven model that shaped most public media projects.

“This project is unique for a variety of reasons,” said Joseph Tovares, CPB chief content officer. “We usually fund a broadcast project and then build out the engagement aspect. Here, the dialogue is actually shaping the production.”

The work “is innovative on many levels,” Alpert said. “We’re creating media almost every day to get people talking. Then we’re creating the longer digital series. We’re building our audience from day one through those conversations, breaking down the normal linear pre- and post-production engagement cycle. It’s all happening concurrently.”

The target audience of younger veterans and viewers also shaped the editorial framework. “This is very much a group of millennial producers for a largely millennial audience,” Tovares said. “That is different for us and for the system. This fits into our conversations lately about reaching out to younger, diverse audiences.”

Tovares acknowledged that the project’s unique nature makes it a bit risky. “And the public broadcasting system is risk-averse,” he said. “With this, we’re exploring new territory, new relationships and partnerships. So that in itself is a payoff.”

Tackling obstacles on the road

The new approaches bring some challenges. Several members of the production team agreed that one of the biggest hurdles is logistics: continuously moving and scheduling shooting opportunities on the fly.

Hernandez handles much of that work, calling stations to arrange interviews and plan town halls and meetings with local groups. Work began March 14 in Wisconsin and winds up next month in Orlando.

“Our number one enemy is the clock,” Hernandez said. “The biggest challenge is limiting the stories we want to tell. I wish we could spend six or seven months on the road, to tell all these stories.”

Each team member was drawn to the project for different reasons:

Garrett Combs is an Army veteran who deployed to Iraq and Afghanistan and is now a photographer and filmmaker in Ventura, Calif. “Veterans issues provide a great lens to look at society as a whole,” he said. “Take mental health and housing — if it’s a veterans’ issue, it’s almost always representative of a larger societal issue.”

Ramon Garcia also served in the Army in Iraq and Afghanistan. He now writes, edits and volunteers at a vets’ wellness center in Los Angeles. Garcia said he’s learning that “people from many different backgrounds and places initially seem so different, but at the end of the day they feel the same way about many issues.”

Kathleen Flynn is a New Orleans video journalist who spent time in Afghanistan and knew instinctively that the story of those military experiences would continue stateside. Her challenge is “giving a voice to veterans that might be having problems or struggles while not reinforcing stereotypes. We’re all very cognizant of that, keeping that balance.”

Michael Premo is a transmedia storyteller who is “excited by multiplatform projects that create a body of work that investigates an issue from multiple angles.”

The team gathers stories at each stop and sends material to Dow and Alpert. Editors send content back to the team for feedback, “so they are creatively involved throughout the process,” Alpert said.

Team members also update social media as they travel. Visitors to the project’s Facebook page have met Katie Kreutzmann, a seventh-grader who discusses the lingering impact of war; Elizabeth Hash, an Army National Guard recruiter and roller-derby skater; Evan and Jenny Owens, who help veterans and their families cope with the spiritual wounds of war; and Fred McKinnon, a comedian and disabled Army veteran.

One of the first stops was Nashville.

“The road team helped us look at the bigger picture,” said Pedigo of NPT. “You don’t have to just think of your veteran community resources. What about your work with immigrant communities? We had more than 70 Kurdish translators here that participated in the war effort.”

NPT brought the team into its studio along with local veteran and civilian leaders for a conversation that was streamed on Facebook Live and OVEE, the public media screening platform. Comments from the studio and online audiences were integrated into the discussion. NPT is producing a 30-minute version of that town hall to air just before Memorial Day. Two more stories are in production and will be promoted around the broadcast.

Pedigo added that he’s learned a lot personally as well.

“I’m a civilian who grew up in a military town, so Veterans Coming Home has helped me reflect on some of the folks I knew and relationships I had growing up,” he said. “I think we need to support a community that welcomes veterans beyond ‘Thank you for your service.’ We need more conversations like, ‘How are you today?’ We need to be real.”

Correction: An earlier version of this post credited the photograph of Ramon Garcia to Dez Hernandez. The photo was shot by Kathleen Flynn.