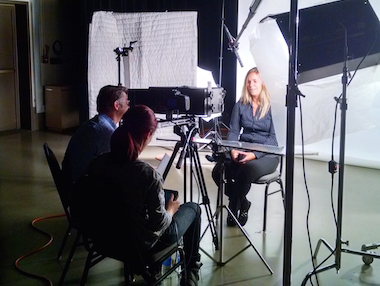 An online documentary project from POV Digital is prompting participants and viewers to consider a rarely discussed topic: what it means to be white in America.

Whitney Dow’s “The Whiteness Project: Inside the White/Caucasian Box” debuted Oct. 6, consisting of 21 interviews with residents from the Buffalo, N.Y., area who consider themselves white.

Dow has focused on racial issues in other film projects, including as co-director of the 2003 POV documentary Two Towns of Jasper, which examined a 1998 murder of a black man in Jasper, Texas, by three white men. After completing that film, Dow realized that he had yet to inspect his own racial identity as a white man.

Dow felt that no one had undertaken a serious project about whiteness and that many white Americans have not discussed the issue. White Americans should examine the role their race plays in society, he said, to become “fully vested participants” in the larger discussion of racism and racial issues in the U.S.

By creating an interactive project instead of a traditional film, Dow hoped to engage a wider audience around the topic with a format allowing viewers to create their own narratives and discussions. Through the POV Hackathon, a weekend lab that helps filmmakers expand projects to digital platforms, the project came to life.

The project features interviews with subjects about their experiences as white people and their relationship to the concept of whiteness. Each interview, just over a minute long, ends with a statistic drawn from studies and polls about race — 26 percent of white Americans believe that minorities succeed in business and education because of racial preference, for example, or 75 percent of white Americans say that they usually come into contact with only a few or even no black people.

Dow started with shooting interviews in Milwaukee and New York City but was dissatisfied with the cross-section of people he ended up interviewing, mainly middle-class liberals. When he started filming in Buffalo, he tried to approach people in as many different ways as possible, including approaching them on the street and putting an ad on Craigslist.

Dow’s interviewees vary in age and occupation; they include a mechanic, a doctor and banker. Most people were willing to talk on camera, he found. “The camera is the new American confessional,” he said. And the style of the interviews reinforces that, with interviewees facing the camera head on against a stark white background.

“I don’t get the same treatment as a normal white person,” said Andrea, a woman who felt that because of her tattoos, she had faced discrimination much as people of color have.

“If I do get a benefit, I would say it’s nothing overt,” said Ken, a man who identified as white and partially Native American. “It’s almost like you could be no color.”

The interactive, online approach appealed to POV, said Adnaan Wasey, executive producer at POV Digital. “The Whiteness Project set out to make use of the Web and social media to spark conversation, not just to create a documentary,” he said. “And actually, there is no documentary here. And that means it can break the rules.”

The project’s website has received more than 1 million pageviews, been shared thousands of times on Facebook and met with a range of reactions in widespread media coverage. Interviewing Dow, MSNBC host Melissa Harris-Perry said that amid ongoing conversations about being black in America, a “parallel discussion” of whiteness has yet to be fully explored.

Others were more skeptical.

"a documentary about white people by a white guy" is the last thing in the known universe that needs to exist http://t.co/eJZ6M4A2R4

“It’s interesting because speaking from my own standpoint, I have trouble conceiving of myself apart from the concept of whiteness,” A.G. wrote. “It seems to me that white and black Americans may be inextricably linked for a long while.”

@MilesKlee @whenthedrum Here's the note that made me feel I am on the right track. pic.twitter.com/VlnOXiXHYn

Dow said he understands that the interviews may make viewers uncomfortable but that they’re necessary to help white Americans confront the gap between their perception of the world and the reality of their privilege in society.

POV Digital aims to secure more funding for the project, which is currently supported by the Knight Foundation and the National Endowment for the Arts. Dow and POV want to conduct 1,000 interviews to more broadly represent how white Americans view whiteness, and Dow wants to create visualizations to make data from studies of racial issues more accessible.

“For a lot of people, they haven’t talked about whiteness before,” Dow said. “It takes sort of a stumbling around for them to get to a place where they can address the particular issues that are actually relevant to their lives.”

One thought on “By shifting focus, Whiteness Project aims for deeper discussion of race in America”