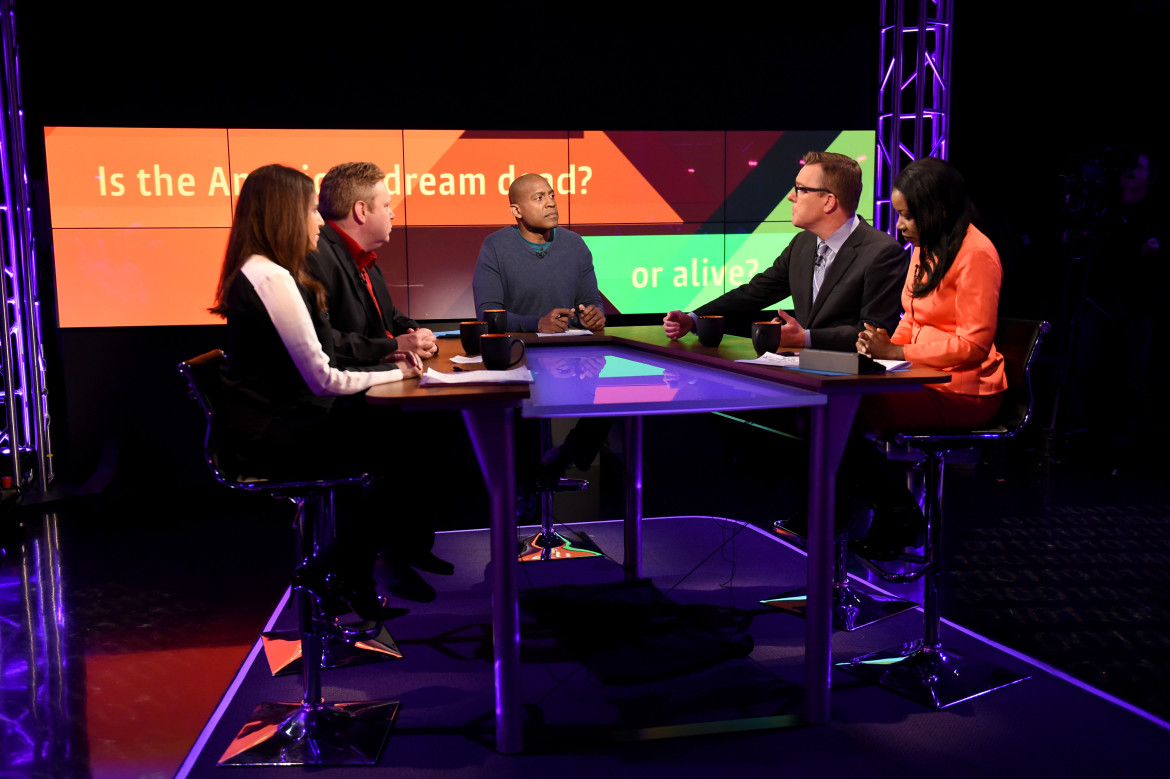 WGBH and PBS planted a new flag in public TV’s late-night television lineup this month with Point Taken, a half-hour debate series that uses polling and social media to engage viewers in issues of the day.

The show, featuring Carlos Watson of Ozy Media as moderator, had a choppy April 6 debut, but tweaks to the format created a smoother, more engaging April 19 second episode on whether the U.S. should take in more or fewer refugees.

WGBH’s strategy for developing Point Taken is an unusual blend of broadcast and web elements that extends the life of the show and broadens its reach. The station is live streaming at least three episodes on Facebook, exposing Point Taken to a potentially vast social media audience, said Bob Kempf, v.p. for digital services. Tailored web content is posted in-between broadcasts to keep viewers engaged, inviting them to take interactive polls, watch explainer videos and share their opinions on the question of the week.

Editorially, Point Taken aims to provide a forum for civil debate, as opposed to the partisan shoutfests on other outlets. Watson ends each show by asking panelists on both sides to describe the most compelling argument they heard from their opponents. “That one moment encapsulates the show’s ambition,” DiIanni said.

None of the panelists are identified by ideology or political affiliation, and the conversations on Point Taken can’t fall along traditional party lines. DiIanni also requires that topics be substantive enough to warrant national polling, and that they be framed in ways that resonate with domestic audiences.

“We heard from a number of people that they couldn’t tell what political associations panelists had. There wasn’t an ideologue among them,” DiIanni said, referring to the April 6 broadcast. Viewers in the studio audience that night were persuaded by those who argued that the American Dream is dying.

“Evidence suggests you can sway opinion,” DiIanni said, “if we can open people’s minds to other points of view in an engaging way.”

Ozy Media, a fast-growing news site for millennials that Watson launched in 2013, is cross-promoting Point Taken. The collaboration benefits both partners. “I love the chance to introduce the PBS audience to a cool new show, and to introduce the Ozy audience to the PBS world in a deeper way,” Watson said.

Online explainer videos feature WGBH Associate Producer Kousha Navidar breaking down the complex issue to be addressed in the next broadcast and inviting viewers to participate in the poll. They’re a fast, fun extension of the show, designed to be highly relatable to youthful audiences.

Adding scientific rigor to the question taken up each week, a national Marist Poll measures public opinion prior to the broadcast. Results of the exclusive polls, posing questions such as “Is the American Dream dead or alive?” and “Should the U.S. take in more refugees or fewer?” set up each debate. Members of the studio audience are also polled before and after the show, helping to gauge whether the debate influences them to rethink their opinions.

The “sweet spot” between freewheeling and formatted

Watson, a former MSNBC host, moderates the tightly run program, giving each team of panelists an initial 30 seconds to make their strongest arguments. Then he fires off a series of follow-ups. Midway through, a “Fact Check” segment asks panelists and online viewers to test their knowledge by making an informed guess in answering related questions.

There’s a lot going on in 30 minutes. “The format was a bit distracting at first, but that happens when a show is being experimented with,” said Suzy Hernandez, director of programming at KQED in San Francisco, after the first episode.

Producers made significant changes for the second show. Instead of having each of the four panelists respond separately to every question, they paired up for a moment of whispered consultation to offer joint responses to their opponents. “We prepped the teams together, rather than separately, so they could build team spirit and compare notes,” DiIanni said.

“It’s a time of day when people are looking for an interesting, juicy take on something presented in a more engaging, fun, stimulating way.” — Marie Nelson, PBS

“Fact Check” questions in episode two — such as “How many refugees did the U.S. accept last year? — were directly relevant to the broader debate topic. In the first program, on the American Dream, panelists were asked, “Are millennials more likely to keep a job for two years or have a tattoo?”

In the first episode, DiIanni said, “We were playing them more for cleverness.” But producers later resolved to use the segment to “echo the conversation.”

The challenge, she noted, is finding “the sweet spot between a freewheeling discussion and a formatted show.”

WGBH declined to share ratings information but provided limited digital data. The April 6 episode ranked as the most socially engaged news broadcast of the day based on tweets for unique users, as measured by Nielsen. For the April 16 show, a Facebook video of Watson and Point Taken panelists live in WGBH’s Green Room garnered a total reach of 66,220, with 2,400 views of 10 seconds or more.

Panelists for that show, which influenced only a small percentage of viewers in the studio to change their minds about refugee policy, were Roy Beck of NumbersUSA; Jessica Vaughan of the Center For Immigration Studies; Ash-har Quraishi, Midwest correspondent for Al Jazeera America; and Melanie Nezer of HIAS, a refugee rescue organization.

Next week’s program will focus on college debt. DiIanni’s team is working on a tentative schedule for the rest of the 10-episode run, although it may change with the news.

Both WGBH and PBS have bigger near-term ambitions for Point Taken.

“Given its focus on key issues, if it goes well it would make sense to plan another run taking [the show] through presidential elections in November,” DiIanni said.

Marie Nelson, PBS v.p. of news, agreed that it’s a crucial time “to bring people on board around civil conversation.” Before joining PBS, Nelson worked on an earlier pilot of Point Taken three years ago when she was e.p. of national programs at WGBH. PBS’s evolving strategy for election-year programming was a factor in launching the show now, she said.

Meanwhile, Point Taken is looking for more stations to slot it into their late-night broadcast schedules, which means bumping Charlie Rose, Tavis Smiley or other shows from the 11 p.m. slot once a week.

Three-quarters of PBS stations in the top 50 markets are airing the show at feed, according to WGBH, and most of the others have scheduled it within the week of the initial broadcast.

“Most of the stations will wait and see over the next few weeks,” said Nelson. Feedback from those stations “who were willing and able to give Point Taken a shot” will be key in “what we can learn from this initial run of the show.”

Nelson described the 11 p.m. slot as an ideal perch for Point Taken. “It’s a time of day when people are looking for an interesting, juicy take on something presented in a more engaging, fun, stimulating way. Late-night really speaks to that.”